Block B Falls in Love With "H.E.R" 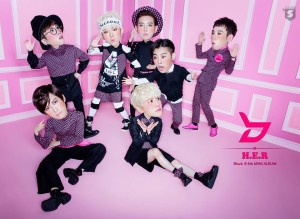 Although the group normally releases music later in the year — BBCs don’t call it “Blocktober” for nothing — Block B decided to surprise us with a summer mini-album, H.E.R. Featuring three new songs and two older tracks, H.E.R is a combination of different styles that show Block B’s flair for an unusual kind of musical greatness.

Having leader Zico at the helm of producing is what makes this release so distinctly “Block B.” He knows what the group is about and knows how to showcase that effectively. While some fans may lament the lack of lines for some members, one can’t deny that Zico’s production works.

From the teaser images, it would be fair to say that the group surprised fans: were they really going to do something pretty and cute? Fortunately, the MV for the title track was released, and plenty of us let out relieved sighs. It was a mountain of disgustingly fun aegyo and craziness. (Though, in retrospect, the exaggerated heads should have been a clue.) Like the MV for “H.E.R,” the album is not cutesy. Instead, it’s a mixed bag, featuring everything from rock to classic ballad.

Prior to the official release of the mini, the group re-released “Jackpot” as a digital single along with an even better MV version. It managed to find a spot on the charts — even after doing the same back April. The public seemed to be in love with the song still.

Additionally, the mini includes a “rough version” of last year’s hit single “Very Good.” The track now takes on even more of the rock feel the original track featured. Forget the new lyrics, such as “I wanna rock right now”; this is all about the guitars. They drive this song, and the distortion used in certain parts is amazing. The techniques and arrangement used actually further the riotous aspect that “Very Good” already intentionally had. I’d be remiss to leave out how great the drums are in delivering proper urgency as well.

The new version actually seems to be like Zico, Poptime, and Han Yohan went a bit crazy with the composition and arrangement. This may have been the demo version or perhaps just another take on the concept. Either way, it rocks (pun intended).

Now, onto the new music.

Block B shucks the crazy, just-gonna-do-us theme and unleashes their lovey-dovey sides. This isn’t Block B’s first foray into love songs — you’ll find tracks throughout their discography — but it is the first time they’ve adopted the concept for an entire album. The group has been bitten by the love bug and wants to embrace this special girl.

To open the album, Block B decides to treat listeners to a ballad — well, sort of. “Unordinary Girl” is an R&B track with a hip-hop flair. The music is actually pretty dang simple and fits in well with the overall rock tone of H.E.R. Instead of heavy synthesizers (though some are present), guitars carry most of the music.

Complete with Park Kyung‘s epitomous “a’ight,” the song is Block B’s way of expressing their attraction. And the self-explanatory title makes it clear that, like the group, their target is not ordinary.

This track stands out from previous tracks in that Zico sort of takes a backseat while the other members get to show off. He doesn’t do the introduction and only sings once before the closing. That’s right: Zico has only one part. Instead, P.O and Park Kyung take care of the rapping. And then there’s Jaehyo. He has improved so much that people thought he had no part since he sounded so much like Taeil.

Although the MV and lyrics for “H.E.R” have been discussed, I do want to talk a brief moment about the song itself. This track is very much a throwback. Like the bright MV, the music reminds me of the vibrant beach rock of the 1960s. I can almost image Frankie Avalon and Annette Funicello dancing in the sand to the song. That tambourine and choir-like intro just draw you in and get you moving.

“Embrace Me Now” is a lovely ballad. The track is a man’s confession — perhaps even a proposal — to the wounded woman he loves. While the song is an outlier in style, the change can be forgiven because of how beautiful it is.

It is easy to get caught up in the idea that Block B is an exclusively hip-hop style K-pop group. However, even though the group possesses respected rappers like Zico, the group also contains one of the better vocalists amongst K-pop groups: Taeil. Like in “Where Are You? / Where You At?” from the Blockbuster album, he once again gets the chance to showcase his great skill. 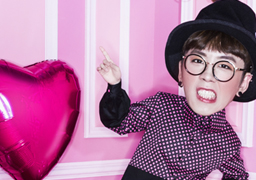 Taeil teamed up once again with composer Tae-eul, and delivered another emotional masterpiece fit for an OST. Taeil’s voice is so mesmerizing that, for the first few listens, I forgot to pay attention to the music. The track features typical ballad fare with its instrumentation: drum set, strings and piano. There are additional sounds, such as wood blocks and snapping, that add nuance. However, “Embrace Me Now” is clearly about Taeil’s voice, which evokes great emotion.

From the latest releases, it appears that Zico and Poptime are on a bit of a rock kick. There is talk that Block B may release more music later on this year — we know Zico is a workaholic — so we’ll see if the rock style continues. Either way, Block B fully delivered on the love concept without sacrificing their style.