Down It, Idol! What Does K-pop Have to Say About Alcohol? 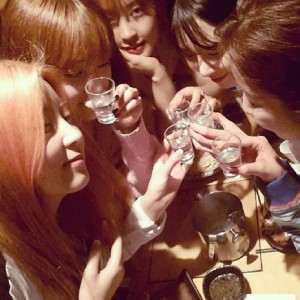 Idols must sing, dance, and present endless charms and random special talents at the drop of a hat. But can they hold their alcohol like 4minute on the left? It’s a question that comes up often on variety shows, talk shows, and radio shows, so chances are you probably have a few random idol + alcohol facts stored away in memories of an interview. Drinking culture in Korea has a prominent role in society, and it’s well-known that soju is the most consumed alcohol in the world. When it comes to entertainment, Korean celebrities often publicly interact with alcohol, inspiring me to take a closer look at how Korean drinking culture intersects with celebrity culture.

This is not series of judgement calls on whether their behavior is in reality healthy or unhealthy, since it is not possible to know the full details’ of a star’s life, but rather an attempt to look at what kinds of messages idols as a group tend to espouse. When individual celebrities repeat many of the same philosophies or experiences about drinking, different patterns begin to emerge.

One message that surfaces quite often with regards to idols and alcohol is the common idea that being able to drink a lot is impressive. Idols will often praise other idols’ drinking habits as a way of complimenting their co-stars or group members. Actor Jung Il-woo said that Uee was good at drinking in a recent interview. Idol groups often must name which member is the best at drinking, so that is becomes common fan knowledge: In interviews, group members have said that Tiffany and Sunny from SNSD are the best at drinking, while Beast chose Junhyung and Exo named Xiumin. The list of which celebrities love to drink and which ones are good at it is an endless spiral of interviews and hearsay, so that it eventually seems every Korean celebrity must hold their alcohol extremely well.

Another common theme that arises is the drinking is fun, shows group camaraderie, and can easily be done casually. 4minute‘s Hyuna recently posted two pictures on her Instagram of the smiling members drinking shots of soju together.  Hae-ri revealed in an interview that she “learned to drink” from fellow Davichi member Min-kyung and now enjoys it. In fact, the list of celebrities who have given interviews about drinking, tweeted about drinking, posted picture of them drinking is so comprehensive that it’s nearly impossible to find an idol or celebrity who has never in some way acknowledged drinking. 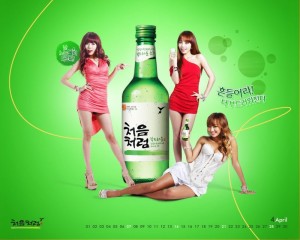 Idols frequently directly promote alcohol brands through CFs and alcohol is featured prominently in many MVs. One of the most famous examples, Lee Hyori‘s popular soju advertisements famously used her image as a fun-loving, sexy star to sell alcohol, inherently linking her image with that of alcohol. Hyuna, Hyorin and all of SISTAR and Kara‘s Goo Hara advertised for the Chum Chu-rum brand, among other celebrities. But, Soju CFs usually go to stars that have a very sexy, bold concept, so we’re not about to see Apink advertising soju any time soon. Once again, this links alcohol with sexiness, particularly female sexiness, and promotes alcohol consumption through direct idol endorsement.

Drinking isn’t all fun and games for Korean celebrities, though. Many have said that drinking can be a recourse in times of emotional distress or disappointment, sometimes to the extent that it worries fans. Jaejoong has made numerous statements about his drinking habits in interviews and in his infamous alcohol essay over the years, sometimes with his signature sense of humor so that it is difficult to tell exactly where he might be exaggerating for comedy or where he might be only stating facts. In interviews, many idols also cop to drinking whenever an album or single of theirs is not doing as well as they’d hoped. These drinking patterns, though they are sometimes described in a funny way and might be exaggerated, are nonetheless troubling.

Last year on Hwashin, CF “soju queen” Lee Hyori courageously revealed that during a career slump, she was depressed and drinking alcohol on a daily basis and sought therapy. (She also has said that she changed brands of soju after her CF contract ended.) These ambiguous messages are more interesting than straightforward promotions of drinking, and it makes me wonder how different fan audiences interpret their statements. Some fans very easily brush off statements like these, while I imagine others respond by considering the many non-sexy sides of drinking, especially coming from the soju queen herself. How do you deal with these statements when you hear them?

Drinking is extremely normalized by celebrities in Korea, so it can be worrying that the risks of alcohol and the un-pretty sides of drinking are barely ever discussed or acknowledged other than as the punchline to an unspoken joke. Potentially unhealthy drinking habits are funny, rarely a cause for concern. Despite that, it cannot be said that fans always buy into the positive images of celebrities and alcohol, only that they exist and the overwhelming portrayal of alcohol as fun can be intentionally misleading.