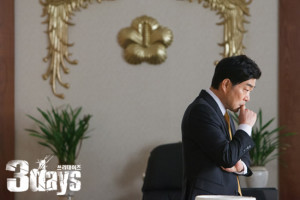 Another couple weeks have gone by, well in the 3 Days universe, another sixty hours. At this point we’re getting more details surrounding the attempt on President Lee’s life.

We learn that despite his apparently lofty ideals, the road to his presidency wasn’t as morally sound as we may have been led to believe. Though we know the President’s suffering from a dip in popularity, the reasons why are a bit ambiguous. Predictably, in his past President Lee attempted to find a fast and efficient way to boost South Korea’s economy by negotiating with a foreign company with a hidden agenda. When these events come to light, the President’s administration agrees to begin impeachment procedures to save as much face with the public as possible. In the midst of all this shady bureaucracy, Han Tae-kyung is still a person of interest in the assassination attempt and is still trying to find out exactly what his father’s involvement was.

Now that we’re officially in the thick of the plot, we can begin to actually see those things that are working exceptionally well and those things that could still use a little help. It’s become quite clear that though 3 Days relies heavily on its plot and the writer to navigate us through all the intrigue, this action drama is most certainly character driven. Even characters that have already been killed off in the series have such complex backstories, they sometimes manage to outshine the main cast.

Joint Chief of Staff Kwon Jae-hyun, played by veteran actor Jung Won-joong, was one of the unfortunate casualties of the President’s pre-Blue House activities. He has a very acute abhorrence of the man he claims to have put in office with the help of a group of men, all of whom have stakes in the President’s political career. More than the others, Kwon seems to have so much more to lose, if his demeanor during debriefing meetings is any indication. When he’s made to be the fall guy for the sniping incident at the President’s vacation home, his jumpy behavior draws unnecessary attention, which ultimately ends in his very brutal death. 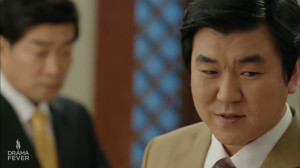 Which leads us to Chief Secretary Shin Kyu-jin, portrayed with chilling precision by Yoon Je-moon. His loyalty to the President is undercut by his desire to be in office. His transition from loyal confidant to someone who’s attempting to use his position to gain leverage as a political candidate is astonishing. He’s completely ruthless; he’ll do anything to keep the President in office, just so he can maintain his position and be able to swoop in when the time is right.

Tae-kyung remains the emotional center of 3 Days. His world continues to disintegrate around him, his circle of allies rapidly diminishing as each hour ticks off before the bill to impeach President Lee passes. His sanity is tested, his emotional stability continuously called into question as he pushes himself to uncover exactly what his father knew concerning an incident in which some several dozen citizens and soldiers were slaughtered in the small village of Yangjiri. In order to find a modicum of closure about his father’s death, he has to dig deeper into the murky and apparently disturbing past of the man he’s sworn his entire life to protect. The cracks in his sanity set up a possible shift in his character, where eventually he may no longer be able to discern between what’s morally right and what will give him immediate satisfaction.

However, by far and away, the most intriguing character is the man pulling the strings, Chairman Kim Do-jin, played by Choi won-young. His sinister nature is absolutely haunting. With just a glance he portrays arrogance, calculating smugness, and an undercurrent of violent madness. His tactical maneuvering of each political head of state is so smooth it’s frightening, a master chess player moving his pawns. What’s even more brilliant is that we as an audience know this. However, his character is written almost as if he knows we know, and he’s daring us to do anything about it. 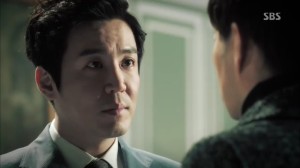 His manipulation is slow but focused. He begins with the President, back when he was just a “lapdog of Falcon”—a US corporation specializing in weapons. He then steers the remaining councilmen to attempt to assassinate the President because he wants to uncover the Yangjiri incident and come clean to the South Korean population. Chairman Kim even takes advantage of the emotional burden of the surviving soldiers of that incident (including the late Agent Ham). He manipulates three councilmen against Chief of Staff Kwon, who hands the “Confidential 98” file to Secretary Shin. We come full circle when Shin then hands over this document to Chairman Kim. He’s taken the weakest part of every man on this show and exploited it and bent it to fit his needs. He exposes then preys on every man’s ultimate weakness: the need for infinite power. Take note, kids. Those who seek more power than they can handle always answer to someone with even greater power. In the end, you become a slave to that power, and you never ultimately end up with what you want, because there’s always someone else you have to answer to.

The characters were written with such depth and complexity, one can’t help but applaud Director Kim Eun-hee’s ability to write them with such ruthless personalities. However, ultimately the most credit has to be given to the actors. While Yoochun continues to show his range—balancing emotional rawness with controlled aggression—the veteran actors have essentially stolen the show. Both Yoon Je-moon and Choi Won-young are exceptional in their portrayal of men with a chilling sense of superiority and resolve. In particular, Choi’s controlled madness is interesting to see unravel throughout the show. 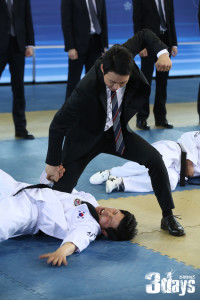 The editing in 3 Days shines almost as brightly as any of the main cast. The use of flashback effectively illustrates Tae-kyung’s continued emotional turmoil as well as his conflict over protecting the President. Again, the editing department showed its exceptional skill, splicing past and present within the same sequence, particularly when Tae-kyung was following up on a lead his late father was chasing before his murder. Yoochun has to be given a lot of respect for tackling the action sequences with little to no stunt help. Considering he’s been nursing a strained shoulder since before the 3 Days press conference on February 26, he’s shown incredible resolve and dedication to his role, and fans have reaped the benefits.

Though there are still problems with the female characters, namely Lee Cha-young (So Yi-hyun) and her continued lack of competence at her job—she basically lets Tae-kyung, who is still a suspect in an assassination attempt, run right past her in a hallway, and she’s incapable of noticing obvious details around her—the story centering around the President’s past is engaging, and the male cast pulls off their roles with precision and finesse.

In the long run, 3 Days is another show about South Korea’s government and how corrupt it is at its core. I’m not exactly sure why that’s something show producers always seem to want to highlight, though I suppose it’s the same in every country. There’s always something unsavory happening from the top down, always a plot to sell arms to an “enemy” country. As concerns South Korea, there are always dirty dealings in small arms and/or nuclear weapons to the North. However, what separates all these shows about dirty politics is the execution. Thus far, Kim Eun-hee and her cast have done a great job of portraying the story with emotion and enough suspense to keep viewers of the show interested. Just how each character’s past sins and mistakes will be rectified is what we’re all waiting for as the show passes the halfway mark.