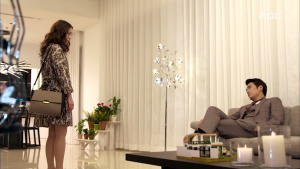 And so Sly and Single Again chugs along.

I’m not complaining — this drama serves me my weekly, much-needed dose of “don’t need to use your brain at ALL” goodness, but as usual with many K-dramas, I’m wishing it could be a lot better than it is, because there are things about it that have potential.

In episodes 5 to 8, we’re seeing more integration of Lee Min-jung‘s Na Ae-ra into the work environment as well as important movement on the post-divorce relationship. More people know that she’s divorced — Seo Kang-joon‘s Seung-hyun, Kim Gyuri‘s Yeo-jin — and it really could not be coming any slower. We’re halfway through with the drama and nobody but her love rival knows that she used to be married to the founder of one of the biggest social media companies in South Korea? Come on, don’t tech CEOs have sasaeng fans too?

And this is a perennial problem with K-dramas, delaying the reveal of a conflict until just two-three episodes before the end of a drama because writers feel like it’ll make the most impact, when in reality, earlier reveals are more interesting for the viewers because then we have to deal with the aftermath for longer. But again, like I’ve said, not expecting genius here.

The storyline is also doing this thing where the more I watch, the less I empathize with Jung-woo, played by Joo Sang-wook. The more they tell me about his character, his family, this divorce, the more incapable, whiny, and undeserving I find him to be. In comparison, Ae-ra is clearly the catch here, and it defies all reason to me that the writers think they have a set-up where viewers will want to watch the two get back together.

For one, I think it’s a pretty dang big deal that Ae-ra had a miscarriage, and that Jung-woo doesn’t know about it. How uninvolved do you have to be in a marriage not to know that your partner was pregnant and lost the child? Sure, very early stage pregnancies are easy to hide, but how bad did the relationship get that Ae-ra didn’t even tell Jung-woo about the miscarriage after the fact? 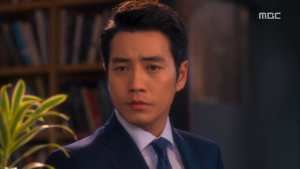 Jung-woo still seems to be under the impression that Ae-ra is doing this because of the money and that she can’t stand that he got rich without her. This is a huge misjudge of character and makes me question the relationship to begin with, not that it was ever very convincing to me — the “good” stuff — but I’ll suspend my belief for the drama and assume that they did get married for all the right reasons and blah blah.

Halfway into the drama and Jung-woo has barely budged as a person under circumstances that matter. Yeah he’s a great coder and yeah he can find mistakes in a second and yeah he’s good-looking, but this guy? Really?

There were fundamental flaws in the coupling of these two people and the only thing that’s changed now, it seems, is that one side got substantially richer. Ae-ra is still the person she always was: hardworking, charming, and understanding. Jung-woo is still the dense, whiny man-child that he always was. He’s now just slightly more take-charge and wears nicer clothes. If anything, giving a person like that more money and more power doesn’t solve problems at all. Sure, he’s not a murderer or a rapist, but in the context of normal, everyday relationships where we assume all parties are not insane, he seems pretty selfish, doesn’t he?

Jung-woo’s character just makes the people around Ae-ra — her bestie Min-young played by the ever great Hwang Bora, and fellow intern Seung-hyun — all the more attractive companions. Let’s just take a second to appreciate how awesome Hwang Bora is, always, as the best friend. She was great in My Girl, she was great in Arang, and she’s fantastic in this. 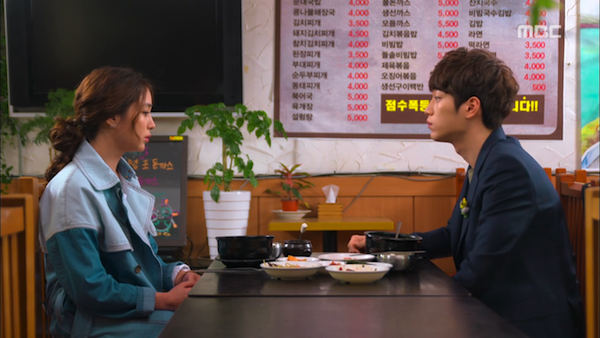 And then poor second lead Seung-hyun. Drama gods, he is clearly the better match, bar none. It’s just cruel to relegate him to second lead fate, compared to the pile of annoying that Jung-woo is. He’s understanding, never judgmental, and helpful in the only way that matters — he doesn’t demand recognition for it. He stands up for Ae-ra and does his best to complement her. Why do K-drama writers always think that these are less worthy traits than whatever it is that the male leads are offering?!?! I JUST DON’T UNDERSTAND.

And Seo Kang-joon. Let me tell you, watch out for this kid. He’s going to do big things. May he get cast in his next project speedily.