This is Infinite, Episodes 5-7: New Levels of Hilarity 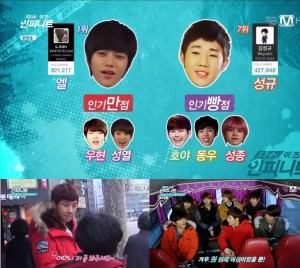 Infinite continues to bring their A-game on This is Infinite, and I’m loving every minute of it. Whether it’s due to improved editing or funnier games, I’m glad that this show is finally living up to expectations and showcasing Infinite’s variety charms to the best of its potential.

Episode 5 was a popularity contest between two teams, split based on the number of Twitter followers the members had — Team Popular (L, Woo-hyun, Sung-yeol), and Team Unpopular (Sung-jong, Dong-woo, Hoya, Sung-gyu). The episode started with a charades-like game, where each member had to get someone in the crowd to say a phrase based on his actions. These phrases were set by the opposing team, and were especially entertaining since most of the phrases described the exact opposite of the members. Poor Sung-gyu got scolded by an ahjumma, because he was staring at her while trying to get her to say “Your eyes are big.” Infinite 1, Sung-gyu 0.

This was then followed by a item exchange game, which was interesting in concept, but failed slightly on the delivery. The main gist of it was that each member had a collectible item, and had to do exchanges with the crowd, in order to obtain the most valuable item. I thought it was pretty impressive that they actually brought in a professional auctioneer to value the items, and Woo-hyun was left terribly embarrassed when she revealed that his autograph actually reduced the value of his item.

The last game was a stealth game, where the members had to accomplish a mission in the Mnet headquarters, without being recognized by any of the staff workers. Throughout this episode, we’ve seen enough evidence of Infinite’s popularity through the throngs of fans, and the workers at Mnet proved no different when they recognized all the members in a split second. All the members, except for Sung-gyu. Infinite 2, Sung-gyu 0. 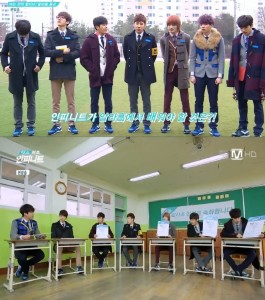 Episode 6 and part of Episode 7 demonstrated a high school concept, with each lesson as an attempt for the Infinite members to learn more about each other. For the first segment, the members had to answer questions about each other, to test how much they knew about each other. Such games are always enjoyable, since the audience gets to see how much they actually understand about each other. And it helps that interesting titbits of information also get divulged in the process. It proved to be Sung-gyu’s day when L revealed that his favourite song at the moment was Sung-gyu’s solo “41 Days”, and Sung-jong also admitted that he respected Sung-gyu the most. Infinite 2, Sung-gyu 1.

Art lesson started out slightly boring, where we basically just watched the boys draw a scene of Infinite camping together. What was more intriguing was when an art therapist was brought to analyse the personalities of the Infinite members just from their art pieces. And of course, you would expect snarky comments and disbelief to arise whenever something positive was mentioned about a member.

After snack time (which was an awesome 1-minute portion of the members ordering snacks in English), each lesson was then focused on how well Infinite knew a particular member. Some of the more entertaining segments: Making out Dong-woo’s gibberish sentences, finding Sung-jong’s hand blindfolded, blind-tasting Woo-hyun’s eggroll. And, playing Don’t Forget the Lyrics with Sung-gyu’s solo “I Need You,” which everyone failed because according to them, “I Need You” wasn’t a mega-hit like “Special Girl” was. Infinite 3, Sung-gyu 1.

The last segment is definitely a fan favourite. To aid the members to learn to put themselves in each other’s shoes, they had to role-play as each other. 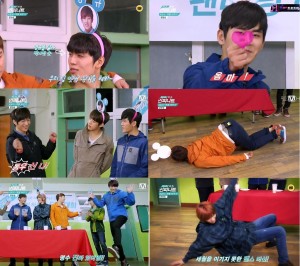 I’ll review the remainder of Episode 7 with the following episode, since it spills over to Episode 8. Fortunately, the series is definitely taking  a turn for the better, and the most recent episodes were probably my favourites. Although the scripted nature still remains, the members take it up a notch through their quirky personalities and great comebacks, which the editing has fortunately managed to capture.

Screen-time is being more equally shared amongst the members, since the episode structure takes turns to shine the spotlight on each member. It made my day to see L drop his L-cosplay, in which he loses his chic L image and become bumbling Myung-soo. That said, Sung-gyu still takes the cake for the best laugh-out-loud moments in this show.

The series is unfortunately coming to an end, in preparation for Infinite’s comeback. I do wish it could have been longer, considering that it took a few episodes to pick up momentum. But I’ll take whatever I can, and I have my fingers crossed for it to end with a bang.