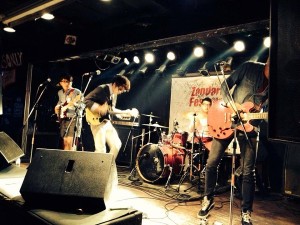 The Feverdogs (usually stylized with all lowercase letters) is a Korean band based in Busan. The group is made up of four members: Lee Jun-soo on vocals and guitar, Son Sang-hwan on guitar, bassist Kim Sung-bin, and drummer Yoon Bong-gyun. The band’s name comes from the title of the song by the fictional band Stillwater from the movie Almost Famous. The group’s discography consists of a couple digital singles and one album, Sweet Nightmare. Their latest digital single was released earlier this month on the 3rd, titled “A Man From Space.” The band has been active since 2009, but their first digital single, Space Romance, wasn’t released until 2012. As far as I can tell, the group created their own label, Nightmare Factory, in time for the release of their first album, and their music is distributed by Mirrorball Music, a large Korean indie music distributor.

The group’s music reminds me mostly of British rock, which is no surprise since their music taste is in that area. Personally, however, they classify themselves under “garage rock.” Although all members share music tastes that don’t quite agree with one another, they still are able to come together to make music that they all like. Feverdogs’ music in their first album is aggressive with hard beats and a strong guitar presence. Both combine with Lee Jun-soo’s scratchy voice to complete the strong rock sound. Their lyrics are repetitive, but they leave plenty of room for the instruments to carry their own melodies and harmonies to carry the song forward. Regardless of the harder edge, some of their songs sway towards pop and alternative influences, resulting in a mix that’s reminiscent of several alternative rock bands today, but with some of the group’s own style.

The group’s first released song, “Space Romance,” is on both the eponymous digital single and the first album. The song demonstrates a good balance between vocals and music, and between all the instruments that don’t compromise any component. Particularly notable are the way the vocalist and guitar match melodies for a “duet” and the always prominent guitar notes.

“Monster” is off of both the group’s debut digital single Space Romance and the first full album Sweet Nightmare. It’s very representative of how the group melds a classic rock sound with some newer elements. In contrast to “Space Romance,” “Monster” lets loose with the instruments.

The deceptively upbeat “Kyung-sung Tune” comes from sweet nightmare. It’s the track that sounds the most mainstream of their music, and as a result, one of the easier ones to listen to. However, the story behind the song is a lonely one that describes the despondency of a location that is no longer as it once was. In this case, it’s Kyung-sung University in Busan, and the lyrics refer to more literally to a woman involved in the better memories.

“Highskool Blues” is one of the few tracks on sweet nightmare that is entirely in English. The song is unexpectedly desperate and expresses pain well. It fits right in with the overarching theme of Sweet Nightmare: anger and generally sorrowful or upsetting memories. The album seeks to both convey those emotions and provide songs to which their listeners can relate.

Also from Sweet Nightmare, the only lyrics for this song are,”Sora Aoi, Sora Aoi. Sora Aoi, Sora Aoi. I’m comin’. I’m comin’, babe.” As you might guess, the song is titled “Sora Aoi.” And with those lyrics that refer to an actual AV model, there’s no doubt that the intent is sexual in nature. It’s here because it’s a quick minute and pretty darn fun to listen to.

“A Man From Space” is the group’s latest, and it represents a more sophisticated turn for the group. Whereas the previous albums and songs take on a raw energy, “A Man From Space” holds back and streamlines for a cleaner sound that almost mimics electronic music. Vocalist Lee Jun-soo similarly switches up his vocals, adopting a lazy drawl that matches well with the lower key music.

feverdogs have a sound that’s overall rather easy to listen to that fits right in with the rock scene. I’d like to see the direction the group takes in the future, especially as they explore different themes and mature their sound. According to an interview, with Korean Indie, their next album seeks a brighter sound and should be something exciting. If you like what you hear, check out the rest of Sweet Nightmare on Bandcamp!