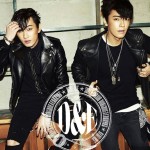 Super Junior must be SM Entertainment‘s outlet for laughs and all sorts of nonsensical crazy acts in music because there is no other explanation for the Donghae and Eunhyuk subunit. What started out with retro fun in “Oppa Oppa” has turned into a Japanese album and tour, with the album Ride Me to drop February 26th and the tour to follow in March. To accompany the future release, Avex Network released a short MV for the duo’s new song, “Motorcycle.” I suggest you keep your eyes peeled for the Super Junior member that makes a cameo.

The music video has just what you’d expect: motorcycles, girls, and long, strawberry blonde wigs? Okay, not quite everything you’d expect.

If anything, the song plays to the duo’s strengths: dance and comedy. Neither are outstanding vocalists, but they’re in the upper tier of their group for dancing. Having worked with each other for an incredibly long time, their synchronicity is still something to marvel at. And as for the laughs, as members of Super Junior, it’s as if they have to have some serious funny bones or they couldn’t have been in the group. But who knew the two could rock those wigs so well?

“Motorcycle” has me oddly pumped for the album release, mostly because if the songs are anything like this one, they’ll be aimed at having fun rather than making a serious masterpiece, a goal that’s right up the duo’s alley. But readers, what do you think about “Motorcycle” and the upcoming Japanese album?