BtoB is one of those groups that is bursting with potential but that hasn’t quite found their niche yet. Although their debut didn’t go quite as planned, their “Wow” comeback was big and it seemed like the seven member boy group may have finally hit their stride with the new-jack swing style. Unfortunately, “Thriller” put them back in a hole. It was obvious they were trying to follow the goth trend, but it just didn’t work for them. Luckily, “Beep Beep,” their most recent single and mini album, is exactly what the doctor ordered. The mini has the right amount of fun, emotion, and funk to make it well rounded and enjoyable, despite a slight lack of originality.

“Beep Beep” is exactly the type of single that works for BtoB. The song is fun and funky with just the right mix of vocal acrobatics and rapping. The bridge, lead-up, and chorus are all addictive and make the listener want to dance. Minhyuk and Ilhoon contribute raps that fit the style of the song perfectly and that don’t feel out of place at all. The saxophone in the background and the overall tempo of the song really make it feel like “Wow” and perhaps that is why it is getting such a good reception from the fans. In the end, you just can’t deny how catchy “Ttwittwippang ttwittwippang” is to say.

“Is This the End” is a smooth ballad that truly shines during the chorus. The verses are fine, but they fall a little flat – not an unusual issue for ballads. Once the chorus picks up, though, the song becomes an intoxicating mix of harmonies. Whether you like ballads or not, it is difficult to deny that BtoB does them well. Their vocal power is not to be underestimated. The back-beat is pretty standard boy band ballad track, but even if it isn’t especially original it is still well-performed, which is what matters at the end of the day.

“Hello” is a classic up-beat boy band track, cheesy sound effects and all. There is the appropriate amount of yelled chants and a chorus hook that begs to be sung along to. It has a backbeat that is slightly rock influenced which gives it the jump-around and party feel. This song doesn’t sound even a little R&B influenced, which makes it different from BtoB’s usual style a little. Despite that, the song is fun and should be a good time at concerts. It falls into the same musical category as songs like EXO’s “3.6.5,” not original but good at what it does. 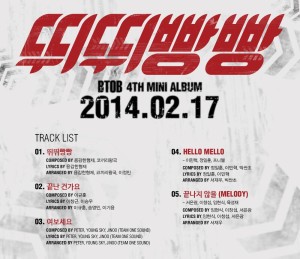 “Hello Mello” is a mid-tempo track that is heavy on the slow rap. Peniel has a well-executed – if cheesy – English rap section in this song that actually has proper grammar! This song is probably the most forgettable just because it doesn’t have a particularly catchy hook anywhere. The whole song just kind of grooves along, which isn’t necessarily a bad thing but it certainly wouldn’t have worked as a promotional track. And did I mention the corny English? It only gets better at the end.

“Never Ending (Melody)” is a ballad dedicated to the group’s fans. BtoB has had some issues with their relationship with their fans in the last year, so it is good to see them getting back on good terms. The song starts out slow but picks up after the intro and has that goose-bump inducing quality good ballads have. The word “melody” is repeated often, which is both a constant reminder that this is for the fans and also a good hook for English speaking fans. BtoB, despite their ability to be funky, is a group made up of excellent vocalists and this track is beautifully sung proof of that.

It’s a solid mini album with songs that cover all of the bases of emotion and tempo. There aren’t any songs that feel out of place and the overall flow of the album is good. Although I did enjoy this as a standard pop mini, there wasn’t much originality. “Beep Beep” is probably the most unique track on the album so it is good that they chose it as their single. Any fan of boy band music will enjoy this mini but don’t expect anything ground breaking for the industry.