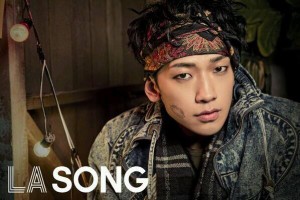 After over three and a half years, Rain has finally made his comeback! His sixth album, Rain Effect, has been released January 2nd instead of the original January 6th. The album has ten tracks total, two of them being the title songs “30Sexy” and “La Song.” Music videos for both have also been released for both. The songs seem to have several contrasting points to do well as title tracks.

For this comeback round, Rain has also engaged in his own reality show, also called Rain Effect, on Mnet. The show intends to do as shows are wont to do: follow stars around to take a look at their daily lives, and in particular, Rain as he did his tour in Japan, ‘2013 Rain Zepp Tour – Story of Rain.’ It’s most certainly an attempt to win fans back after his military scandal, to draw them in with eye smiles and variety-induced awkwardness. He’s also been filming in December for his comeback Hollywood role in the upcoming movie, The Prince.

If there’s anything to say about this, it’s that Rain knows the sexy route will pretty much always work for him. I can’t say I like these more than his previous releases, but I’m not totally opposed either. What do you all think?