Getting to Grips With GOT7's debut

It was bound to happen eventually, the Big Three getting round to introducing new groups to supplant their established acts. As a follower of K-pop for about four years, I would say this falls into place with the companies’ business plans to give the fans something new every few years or so, and prepare fans for the eventual transition into supporting a new act. 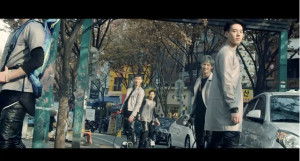 So far we have seen SM Entertainment with EXO, who have successfully left an imprint on most aspects of K-pop, and appear to have taken the most accomplished rookie baton, running away with it. In another corner, we have got YG Entertainment’s Winner, whose claim to fame would be being the product of a televised audition/fanvoting show, the stuff Japanese idol groups are made of, and where emotional bonds are forged through television screens.

The last of the Big Three to join in would be JYP Entertainment’s GOT7. While they certainly have not used marketing muscle, or every single promotional tactic known to man, we all know that JYP on his day certainly has a knack for good tunes and some slick dances, and they make for fun watching.

So here’s the lowdown on GOT7, where the MV and live performances are concerned.

This song in many ways could be described as the GOT7 equivalent of “MAMA”. Not mind-blowingly good, but decent enough to hint at the potential that they pack. I found that synth track that repeated for most of the bridge quite catchy, if slightly annoying as the song progressed on. Well, at least that part was going to stick for listeners.

After a few listens though, the strengths of the song shine through, particularly in their vocal deliveries, which do not seem 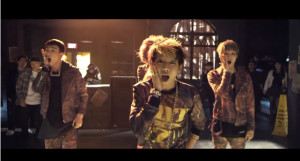 strained, and how the rap break is rather fluently done.

On the other hand, I am not too sure about the lyrics, which apparently seem to be made up of the guys largely boasting of their appeal to the females. Then again, it might be just parody of the very over the top lyrics that make up most of K-pop, or maybe I am thinking too much.

At least the video plays it straightforward, showing them as hip students with an edge, and hanging out at underground dance clubs, impressing the girls in dance offs. No special powers hinted at there, and best of all, no shamelessly pompous backstory.

For me, lives are always where JYP acts redeem themselves, particularly in the realm of choreography. While the introduction was just a series of electronic beats, at least that gave us more chances to focus on the dance moves. I particularly liked the somersault 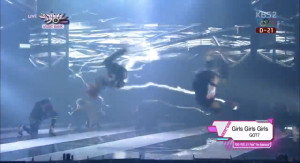 that led to two members facing each other (right). However by now, I find the backflip to play dead move kind of boring by now. You know, its been a few years since the “Heartbeat” craze.

I had lesser to say about the performance, in that it was competent, and in line with expectations of a rookie group. I still think its odd to see moves that were on the less aggressive, even bordering on funny, that did not really seem to synch with the lyrics.

In many ways, this song really would be to GOT7 what “MAMA” is to EXO. It is acceptable enough where debuts are concerned, and memorable, if not particularly polished.

One way this song works though, would be as a debut: to show us that they are capable enough, but at the same time, to leave us guessing at their future development and their potential.

I would give GOT7’s debut a 3.5/5, simply on the grounds they have managed to intrigue me and hint at their potential. As an overall package though, its really as mainstream as most guy groups get, to be competent but not particularly outstanding.