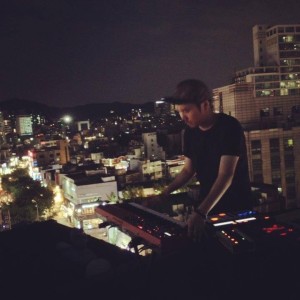 It’s time for another segment of K-pop Indie Gem! This week’s feature is DJ and music producer Demicat. He began DJ-ing in Seoul in 2006 and released his first tracks in 2007. Since then, Demicat has released several full-length albums and showcased live performances. Demicat’s first works contain strong jazz and hip-hop influences; over time he’s expanded into other genres such as house and dubstep.

One of his first releases, “Swingin’ With a Cat” is characteristic of his earlier songs and his Acceptable Range album in general. It has a strong jazz influence with a subtle bass guitar and repetitive drum rhythm. Throughout the song there are shorts glimpses of a saxophone and other brass instruments. The piano is also wisely used, starting off as part of the repetitive rhythm and slowly controlling the melody with an air of nonchalance, before returning to the background.

For a more subdued and less jazzy sound, check out “Life Streamin’” or “Last Train (At Last 12 Remix).”

Demicat’s second studio album Tomorrow Sucks, was released in 2010 and, while it was a continuation of his jazz-influenced music, it also began to show his experimentation with different styles. “The Way of Pathfinders” is a prime example of this.

Demicat’s latest release, the EP Out Loud, draws its influences from electronic music and dubstep. “Makes Us Whole” starts off the album and continues the disco funk from Tomorrow Sucks. What is evident, though, are the growing electronic elements. They start out light but become noticeable about one minute in. What Demicat also does well, that is also appreciable, in “Makes Us Whole,” is the layering of voices. Demicat doesn’t use much layering of singing in his music in general but when he does, he does it well.

“Higher Ground” leaves behind the funk to fully transition into electro-synth and dubstep. I was surprised by the way Demicat incorporated dubstep into his music because he’s managed to make it the focal point of the song while never overwhelming the listener. This is quite unlike many current dubstep artists.

“Hold Me Tight” combines a bit of dubstep and layered singing. It strikes as something an American indie-electro artist could/would produce and that just demonstrates Demicat’s versatility.

If instrumentals aren’t your style, Demicat still has something to offer. His collaborations with other artists have produced wonderful gems. Two notable tracks are “Tomorrow Sucks (Bonus Mix),” which features Sean2Slow and Beenzino, and “Singing Bird,” featuring Neon Bunny. “Tomorrow Sucks” is a slow hip-hop inspired song that is enhanced by Sean2Slow and Beenzino’s raps. Their smooth vocals mesh with the song and create a polished final product that I could listen to all day.

“Singing Bird” takes a different approach with an almost psychedelic vibe. It’s a free-flowing and unrestrained song that when combined with Neon Bunny’s airy vocals, relaxes the listener.

Demicat is a skilled DJ and producer whose talents span different genres of music. While I’m partial to his jazz-influenced earlier tracks, I do find his recent electronic releases just as good. What makes Demicat special is his tying together of the various genres. He incorporates many styles and uses a variety of instruments to do so. Demicat’s musical evolution is visible through his discography and every release has been as improvement from the last. He’s definitely an artist to keep an eye out for.

How did you like this week’s edition? What artist(s) would you like us to cover? Let us know below!