Another day, another debut. The latest group to debut this year is five member boy group NOM. Their debut has gone relatively unnoticed while simultaneously being criticized for the song’s supposed similarity to Shinee’s “Noona You’re So Pretty (Replay).” NOM is comprised of Kay, Yong Gi, Ah In, Hoo, and Yohan.

The music video follows NOM and their “Pretty Noona” jumping from elementary school to the present. The MV draws parallels between the two times with the kids protecting their noona from a bully and the adults protecting her from threatening men. If you noticed a familiar face, it was Hwang Min-woo, AKA “Little Psy.” He plays the role of Ah In, the red-haired member.

In between these scenes, NOM sings and dances in a school yard and Egypt. The school yard is relevant but … Egypt? And on top of that, it’s a poorly constructed set of Egypt. The pyramids, sphinx, and sand, just screamed “we’re trying too hard.” In addition to that, the lighting in the Egypt scenes was horrible. It shadowed their faces and distracted from NOM.

I can’t name one thing I like about this MV. It’s not horrible but it’s so bland; nothing stands out. It’s a run of the mill low-budget MV. The lighting is just plain bad and I can’t stand the filter used during the kids’ scenes. And even the kids’ acting felt forced. 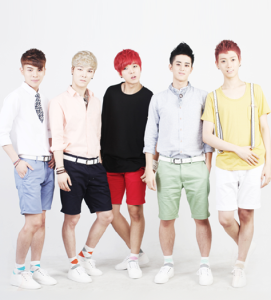 Plus, NOM’s visuals didn’t fit this song. They look too old to be doing a sugar-pop song like this. Their eye makeup was also a strange choice — too much eyeliner. Combined with the harsh lighting of the Egypt scene, it looked like NOM had bags under their eyes.

The song, however, is a tiny bit better. It’s definitely no masterpiece but after so many listens, it’s grown on me. The song is light and sweet and the boys’ voices carry the song well. The raps could have been improved — the rapper’s voice and flow do not suit the song — but it wasn’t jarring. Overall, its a mediocre nondescript song that many rookie groups could have released.

The song has been criticized by Shawols for it’s similarity to Shinee’s debut song. But let’s be honest here, the songs are nothing alike. Neither the music nor the lyrics are similar. The only similar thing is the name and plenty of K-pop groups have songs of the same name. Shinee doesn’t own the rights to songs with noona in the title so I find this a laughable criticism.

This is not a strong debut for NOM. The song is unremarkable and the MV, uninteresting. Part of the problem might have been the low production value of the MV. The boys themselves don’t bring anything new to the table, either. Their voices are decent but don’t stand out. Optimistically, they can only improve from here and I hope their next song fits their image better.