The Master's Sun is Spooky Fun

Occasionally a drama manages to be so spectacular that we watch it again. Boys Over Flowers is one that many fans have probably seen more than once for a variety of reasons, two of which can be summarized as Lee Minho and Kim Hyun-joong. Occasionally it has personal meaning — Operation Proposal is the one that inspired my husband to finally propose. For one reason or another, dramas that we repeat have managed to capture our imagination and our hearts. It is therefore telling that only halfway through the show, I knew that, for me, The Master’s Sun would be one such drama. And every episode, every few minutes, I am reminded of why. It is a triumphant and sublime symphony of splendid writing, impeccable acting, stellar direction, and excellent editing.

Of course, probably no one is terribly surprised that writers Hong Jeong-eun and Hong Mi-ran, more recognizably known as the Hong Sisters, have managed to pull off another big hit, with AGB Nielson finding that the September 5th episode reached at 17.3% rating. Pairing them with director Jin Hyeok of City Hunter fame was essentially a stroke of genius on the part of airing network SBS.

The Master’s Sun tells the story of a poor woman who is haunted by the ghosts she can see and the problems they want her to fix and a rich man who is haunted by a traumatic past. Early on, it may have reminded some viewers of the American television show The Ghost Whisperer, and it is clearly in competition with the currently airing Who Are You.

But anything beyond superficial comparisons to either is essentially an insult to The Master’s Sun. The Ghost Whisperer and Who Are You are both procedurals woven into a longer arc, and both are of mediocre quality. The ghosts aren’t very scary, the stories are full of tropes, and the acting leaves a lot to be desired. At least once during nearly every minute of every episode of Who Are You, I think to myself, “This is a terrible show.” Our only consolation may be that Taecyeon’s character looks almost as miserable as we feel watching his acting, so at least we’re not alone.

By comparison, The Master’s Sun focuses much more strongly on the bigger arc of the story, with smaller procedurals built into it. The Hong Sisters are creative in their vision, and the procedurals can be quite different from the usual. Now I know that I can enjoy a story about a ghost dog that gets help for his master without feeling like I am watching children’s television. There’s a ghost kitty too.

Meanwhile, the cast that brings the Hong-Hyeok vision to life is brilliant. There is not one actor in this show that isn’t great at their job. Well, maybe one — the lead character’s sister, and the writers may have just been a bit lazy with her character. Otherwise, from starring to supporting role, each actor is a fine choice with a great sense of comedic timing. 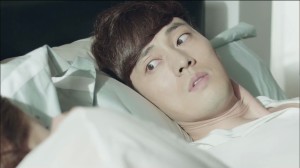 While the entire cast shines brightly together, So Ji-sub stands out in the lead male role of Joo Joong-won. The Hong Sisters could write perfect line after perfect line for him, but it wouldn’t matter much if he couldn’t pull them off. Luckily for us, and really, we are lucky, So turns out to be a talented comedian and this production is the ideal vehicle for his skills. I wasn’t really expecting this, but not only does he deliver the lines with perfect timing, he’s also learned to use small changes in his facial expressions to great effect. Put the timing and the expressions together, and So’s Joong-won becomes hilarious and very loveable. But underneath this comedy of love and horrors is a tragic emotional narrative, and part of what makes So’s comedy so powerful is that he never allows us to forget the pain beneath his mask, while allowing us to laugh at his silly attempts to avoid human emotion.

Seasoned film star Gong Hyo-jin plays Tae Gong-shil, the lady that Joong-won would like to keep by his side. Gong’s performance in this role is essential — without her, So Ji-sub’s performance simply wouldn’t work. Independent of her love interest, Gong-shil is an interestingly drawn character. She’s tortured by the ghosts who won’t let her sleep because they are always asking her to do stuff, yet she remains deeply empathetic, always trying to resolve their problems so they can head off to heaven in peace. Gong-shil must also live with the threat of possession, and it is this part of the role that becomes a true test of Gong’s talents. She manages this part of her role well and is generally very capable of capturing the audience’s sympathy and affection.

Perhaps the biggest complaint to be made about this show is that So Ji-sub gets too much of the good stuff and Gong Hyo-jin is no chance to shine just as brightly. That said, Gong-shil is a success in a perhaps more subtle way. So far, the trajectory of the show has been shaped by having Joong-won adjust to the way she sees the world, not the other way around. While superficially this is not unusual, given the extreme difference between Gong-shil and other human beings, it’s quite an adjustment. In that sense Gong-shil and her story become an argument for staying true to one’s own truth, no matter how crazy it might seem to others. 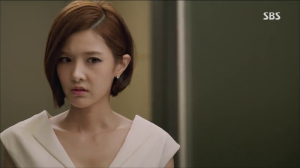 The supporting cast is both sizable and wonderful. Stand out talents include Kim Yoo-ri as the feisty Tae Yi-ryung, a self-involved starlet who is Gong-shil’s former classmate. After her rather one dimensional role in Cheongdamdong Alice, it’s nice to see Kim have an opportunity to flex her acting muscles. Meanwhile, Lee Jae-won (no, not the hottie from H.O.T.) is a hilarious pleasure as security guard and resident gossip, Lee Han-joo. If he’s in a scene, you’ll be chuckling or laughing out loud, guaranteed. These are just two examples; there are many others.

Usually when a drama ends, that’s it for the viewer. We don’t watch them again; we know what happens and one time is enough. Some, like Empire of Gold, (or Sword and the Flower for the five people who, like me, watched to the end) are incredibly powerful, but any reasonable person is glad when the pain is over. The Master’s Sun will not be remembered like that. It is delightful both in its humor and its optimism. While it unpacks the ways that deeply painful experiences can misshape us, it also offers a vision of how a cold heart can be warmed again.

Even the take on ghosts and ultimately death is optimistic. At the start of the show the images are scary and sometimes shocking. For example, there is one ghost who lives in the mall that Joong-won owns, and he hits the top of a litter bin over and over in an initially jarring and frightening way. Later, he helps Joong-won get a message to Gong-shil when he can’t be around to do it himself. This reflects the general ethos of the drama: we are all one big family, even when we don’t want to recognize it, even when we’re dead.