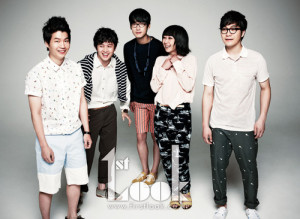 Founded in 2008, Achime (아침, meaning “morning”) is a five-member rock group made up of Kwon Sun-wook (vocals/guitar), Kim Jung-min (bass), Kim Su-yul (drums), Kim Dong-hyun (guitar) and Kim Kyung-joo (keyboard). I refrain from assigning a clear rock genre to the quintet because their style is rather varied. From a deconstructed, electronic and fractured sound in much of Hyperactivity, to the more melodic, traditional alternative sound in Hunch, they’ve explored quite a range. However, what ties Achime’s sound together across the various tonal changes is the group’s sense of “looseness.” Their music is well-crafted, but the overarching sound does not convey the feeling of frigid structure; it compositionally “breathes,” so to speak.

Sometimes, having that breathing room is really nice in music — a sort of escape route from the heavy immersion complex music tends to have. To get a better understanding of what I mean by “escape route,” I’d like to start with their 2011 EP, Hyperactivity.

Hyperactivity treads the line between “psychedelic rock” and “happy alternative music,” which is a description that frankly sounds really weird/contradictory on paper. I suppose that psychedelic rock is just the structural dissolution of any form of rock music, but what I really am after with the quasi-analogy is that the melodic color of Achime is quite cheerful; it takes on a variety of genres, along with a psychedelic overtone, which comes together in an ornamental quality.

Achime explores the “trippy zone” most in the song “Hyperactivity.” With minimal vocals, the instrumentation is allowed to carry the weight of the song. The overall musical character of “Hyperactivity” is crisp and clear, almost as though you could cut your finger against the melodic line. The melody as a whole has incredible class (lounge music-esque) but sort of gets drunk along the way. (My bets are that the producer, who was imbibed during the production of “Hyperactivity,” proceeded to press random buttons on the synths; but they liked it so much that they just went with it.)

“Rainbow at 2AM” fits the typical musical texture of electronic-pop, but is cast with a rock mold. It isn’t my favorite from the group, but it serves as a great representation of the variance in style. The strong incorporation of pop gives it enough breathing room amidst an air of nonchalance — basically, it’s fun.

“맞은편 미래” from Hunch embodies the mellower end of Achime. The vocals from Sun-wook strain ever so slightly, giving the singer some approachability. It’s the kind of music one could put in the car and sing along to. The entirety of the song is “feel good” and it doesn’t ask for the listener to fuss over it too much; listening to it might even help one find beauty in simplicity.

Hutch overall gravitates towards the same kind of emotional response, from the cover art to the music itself. While it doesn’t try to musically evoke serenity the way MYK does in Saltnpaper (using common musical motifs that feel ethereal), Hutch becomes serene because it has the vitality and calmness of their namesake — ‘morning’. Rock isn’t usually the genre of music that one would seek out at dawn, but Hutch is definitely a morning album that acts as a precursory jolt of strength to take one through the day. There’s something very fluid about entering and leaving the album at various points along the way — a bit of “breathing room” is perhaps how you should look at it.

Moving away from the extremities, “불신자들” strikes a very happy medium between simple, memorable rock melodies and complex musical layers. Set under a quirky frame (it’s better heard than said), this song, like “Hyperactivity,” eschews traditional vocals and lets the melody of the instrumentals sing. And sing beautifully it does.

“Overcome,” from their latest album Overcome, is a toned down anthem pop-rock song that is comparable to the stylistics carried by Cho Yong-pil in his recent album. The song is youthful, with a central, addictive melody, and this sets the foundation for all the decorative components; free of clashing elements, there’s also a dash of shininess to their delivery.

Overcome is probably the linear combination of their mini Hyperactivty and Hutch, and is likely representative of what Achime wants to be as a group. Their latest single, “Swtsxtn,” continues on the path that they’ve been following for a while. Though the sort of mobile stance that Achime takes with music may not suit everyone, Achime is consistent, no matter the album, about injecting a lot of happiness into its music. For that alone, it’s well worth listening to.

I hope you’ve enjoyed today’s Indie Gem. Let us know what you think of Achime in the comments!