M.I.B.I.B (Most Incredible Busters In Black) 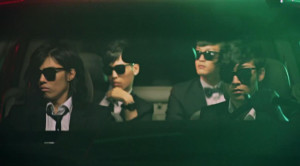 In the wake of their mentors’ departure from their label, M.I.B seeks to incite Much Inebriated Bouncing with their latest party-starter, “Dash (Men In Black).” And the guys get the job done with an electro-dance/hip hop siren song that lures the listener to the floor while displaying 5zic’s, Cream’s, and SIMS’s considerable talents on the mic.

The MV, however, is not as successful as its backing track. Men in Black (the movie) serves as the motif, but the identity of the MV becomes confused as it vacillates between alien hunting adventure, spy caper, and a dance party with randoms. By the end, the viewer is left convinced of the group’s omega-level coolness, but with more questions than answers. Who are the aliens? Are there even any aliens in this? Have they used that memory-erasing ophthalmoscope on me? Because I can’t figure out which ones are the aliens. And how are they able to drive at night with sunglasses on? Does swag work like second sight?

A driving beat, electronic sound, playful add-ons, and flows sick enough to need penicillin make this into a song you’d be as likely to groove to on the dance floor as you would to sit in your room with your headphones on, bobbing your head and taking it all in. The track bears a resemblance to Justin Timberlake’s 2006 hit, “SexyBack,” with slick, drum machine percussion, textured synthesizer, and distorted background call outs. Synth riffs with oscillator sync reminiscent of “Human After All” era Daft Punk, rubbery bass, and rhythmic clavinet that comes in with the hi-hat cymbals give the song an industrial funk feel. That orchestral exclamation sound used in dance and hip hop music in the late 80s to early 90s and in the 2NE1 song “Pretty Boy,” and funny sound effects round out the soundscape. Young Cream and SIMS spit some hotness, but it’s 5zic who turns it into fire with his “Pavarotti flow,” as he calls it. Speed, rhythm, and old school hip-hop intonation make his rhymes the best 20ish seconds of the song. The only misstep is when Kangnam awkwardly sings “shawty gon’ tell me what you want,” which is a little cringe-worthy. No one can say that without sounding dumb. It’s humanly impossible. Other than that, Man, It’s Baller! 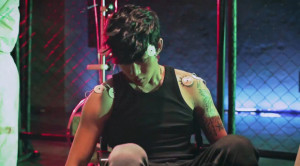 Whereas the song is a slam dunk, the MV is more of a missed free throw: it veers off trajectory. It’s not a complete waste, saved by the charisma of the group members, but it is a bit of a mess. The MV opens with a Will Smith stand-in who looks nothing like Will Smith (save one feature) using the mind erasing tool.

In the next scene, Kangnam and 5zic, looking bedraggled and under duress, are in some sort of laboratory in a warehouse and/or garage. It’s unclear if they’re humanoid aliens being experimented on, or captured spies, or captured humanoid, alien spies being experimented on. They’re injected with a mysterious substance and subsequently go into convulsions, then turn into men in black (now dressed to the nines) in a very Jekyll/Hyde-like transformation. They’re then joined by Young Cream and SIMS, all four now Dapper Dans in black suits and sunglasses, standing in front of a Cadillac Escalade. It looks like they might be planning to drive in their condition and with their vision impaired by sun protection at night. This is not good news. 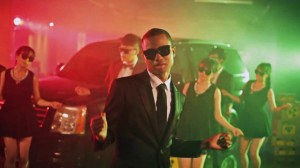 The next three minutes are shots that tell less and less of story until the pretense of a plot is abandoned altogether. We see the guys interrogating their doubles, who are hooked up to polygraphs. It’s unclear why they’re being interrogated, but the discussions look heated enough to be important. Then, the group rides around in the Escalade wearing sunglasses because they’re trying to strengthen their night vision? In more sensible scenes, they introduce a new dance which is simple enough to do: arms at a 90 degree angle on your sides, lean back. A small effort to look very cool. They do the dance with each other, with women in black who seem to serve no purpose other than to somehow look uncool doing something very easy to look cool doing, and with fake Will Smith. At the very end of the video, M.I.B.I.B (M.I.B in Black) stuns their doubles with the memory-erasing ophthalmoscope in a halfhearted return to the plot. The alien-hunting part of the Men In Black motif has been all but forgotten at this point. 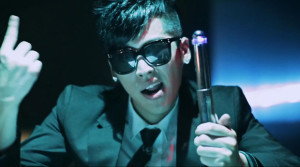 The best parts of the MV are the performances—individual and group. The charisma of each member is impressive. 5zic is the standout, with a deadly combination of hip hop swagger and sexiness, although Kangnam’s pouty-lipped intensity is worth note. Cream and SIMS, who don’t play up their sexuality, both have a boldness, irreverence, and intelligence that make them compelling.

“Dash (Men In Black)” is an awesome song with a silly MV that doesn’t live up to the expectation the song creates. But there are worse ways to spend four minutes than watching this MV.