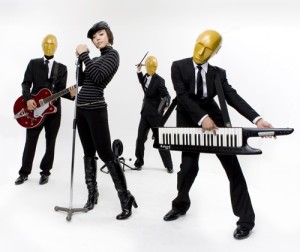 Welcome to another segment of K-pop Indie Gem, wherein we cover the electro-pop/modern rock band, W&Whale.

The group is actually the unification of the band W, which stands for “Where the Story Ends” and the female vocalist Whale who are/were signed under Fluxus Music. W, formed in 2001, has three members: Bae Young-joon on guitar, Han Jae-won on the keyboard and Kim Sang-hoon on bass and drums. W released an album on their own back in 2005 with various OSTs across the years, and are probably most famous for the track “Shocking Pink Rose,” (featuring Clazziquai‘s Alex and Horan, and Loveholic‘s Jisun) which was featured in the wildly popular drama My Name is Kim Sam-soon. The group also went on to win “Artist of the Year” and “Best Pop Album” (for Where the Story Ends) at the 2006 Korean Music Awards (KMA).

Whale joined W as the lead vocalist to form W&Whale, which released its first album, Hardboiled, in 2008 with the title track, “R.P.G. (Rocket Punch Generation) Shine.” It is arguably their most popular song, and has claimed “Best Dance and Electric song” at the 2009 KMAs.

“RPG Shine” has a rather mellow electronic component, which is quite surprising given their description as an electronic/modern rock band. The electronica is certainly not absent, but the toned down quality combined with the pop base makes for an engaging, easy listening track. The whole song would’ve been light and airy in a slightly mundane fashion if not for the rock and electronic components embellishing the solid melody; the song has dimension, and an eclectic mix of styles.

“오빠가 돌아왔다” is a relaxing song that is rather jazzy (horns and everything); but even then, one can find synth embellishments that downplay the jazziness. There are some similarities with Clazziquai’s style of core melody in this song, which is no surprise since they are label-mates.

But to call them Clazziquai “copies” would be highly premature, as W&Whale has some music during the Hardboiled era that have a heavier rock edge, such as their digital single, “Born to Rock (본투락).” I wouldn’t call it hard rock, but it does have a stronger guitar and drum line that gives a slightly harsher pop-rock contrast to Whale’s light vocals. Again, there’s a great infusion of electronic components into the instrumental that give a unique twist to a pretty simple musical composition, yet leave the instrumental airy enough to not over-run the vocals.

With their second album, Random Tasks in 2009, the group takes on stronger electronica sounds though they don’t sacrifice their principle style. A great example of this transformation from mellow jazzy music, with a subtle nod to the electronic side of things, is the song “R.P.G. Prime (feat. DJ Clazzi),” a remake of “R.P.G. Shine.” “High School Sensation” also takes on the same vibe, with a prevalent electronic-pop sound that doesn’t lose the delicacy or color of Whale’s vocals.

“Dirty Blue Jeans” is a song that conveys the rock side of W&Whale really well. On the other hand, “Blue” takes retro-pop into the folds of an electronic-influenced band. That might sound like a bad description, but this combination of genres of alone should warrant it a listen. It’s very much light-hearted like the jazzier songs mentioned above, but not outright calm. The instrumental takes a heavier hand here as well, producing a more dramatic track that doesn’t just disappear into the mellow realm. My personal favorite manifestation of this evolved sound from Random Tasks, however, is “월광 月狂 Madness of the Moon”

With the group’s third album, Circussss, the electronic transformation goes from light to dramatic. “Break It Down” is undoubtedly electronic; the throbbing bass will not let you forget it. But what “Break It Down” does really well is not just turn itself into a run-of-the-mill club song; instead, it features a clear melodic rift in a powerful but creative instrumental. This maintains the indie quality while letting the electro-pop punch be the commandeering element.

“Circus” or “Acrobat Girl” is very similar in concept to “Break It Down.” The song reflects a strong rock-cum-electronic instrumental. Novel it may not be, but it makes for an intriguing and fun listen. “Magic,” on the other hand, is actually a great mellow song that fully embraces both the band element and the electronica the way a lot of their earlier music didn’t. This makes “Magic” one of the most innovative tracks on Circussss album, if not the most.

Unfortunately, W and Whale recently parted ways, and currently W has joined forces with singer Jas to create the group W&Jas. W&Jas takes a very similar sound to W&Whale, prior to W&Whale in Circussss. It’s a sound that’s closer to Random Tasks, but with a clearer and more vibrant rock sound that overlays the electronica; this is most apparent in the song “Speed Up.”

That’s it for this week’s K-pop Indie Gem! If you haven’t checked out W&Whale already, hopefully this will get you interested enough to do so. If you’re already a fan, let us know about your favorites from W&Whale in the comments!