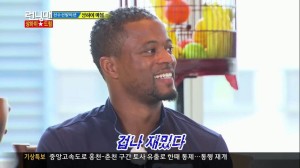 A recent episode of Running Man guested Patrice Evra, a French soccer player who used to play alongside Park Ji-sung. Evra is the second foreign guest to be featured on Running Man, the first being Jackie Chan. While both guests’ episodes were entertaining, there probably won’t be another foreign guest for a long time.

The most pressing issue when having a foreign guest is the language barrier. Though Jackie Chan spoke a little bit of Korean (from his time living in South Korea) and Evra knew a few phrases, neither could fluently communicate in Korean. Although many of the games featured on the show don’t necessarily need verbal communication, some of the funniest moments come from the cast’s interactions with each other. If the guest and cast cannot easily converse it can interfere with the rapid-fire banter we’ve come to love.

To overcome this barrier, Running Man staff provided Jackie Chan with a translator. Evra, on the other hand, had no translator and had to rely on Park Ji-sung to let him know what was going on. While this allowed Jackie Chan and Patrice Evra to communicate with the cast, it was, at times, burdensome to watch.

That’s not to say that the episodes aren’t enjoyable. However, as funny as these episodes are, more foreign guests probably aren’t going to be invited on the show because it’s just not feasible. Sure, it was reasonable for three episodes but the cons outweigh the pros. With the language barrier, games must rely less on verbal communication and additional time must be taken to translate and explain the games to the guests, resulting in longer production time. Hiring a translator every time isn’t worth it either because a translator must be paid and a recurring translator would cut into the budget. 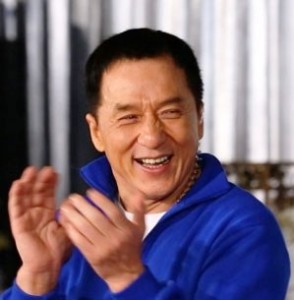 Jackie Chan is a fairly obvious choice. He’s internationally famous and many people have grown up watching his movies; he’s a childhood idol. For the Running Man cast and staff, having Jackie Chan on the show was like a dream come true. It’s no surprise the cast squealed like fanboys when they saw him. Having someone as renowned as Jackie Chan on Running Man elevated the status of the show and satisfied personal desires to meet him.

Patrice Evra, on the other hand, was there only because of the Asian Dream Cup. The Asian Dream Cup is a charity soccer game hosted by the JS Foundation — Park Ji-sung’s charity organization — and many famous East Asian soccer players participate in the game. Ji-Sung has also invited some of his former teammates from England to play- last year’s Asian Dream Cup Running Man episode saw the guest appearance of Rio Ferdinand, though he was not a full guest. This year Patrice Evra was chosen as a full guest, probably due to his close friendship with Park Ji-sung. But what did Running Man gain from having Evra on the show besides a small ratings bump? I’m not really sure.

Evra managed to fit in well with the cast and I enjoyed the episode much more than usual. And almost everyone seems to agree that the Jackie Chan episodes were extremely entertaining as well. But part of the enamor of these episodes were that they were special; they were a treat that only comes along once in a while. If every other episode featured a foreign guest, Running Man would become tiresome.

Running Man‘s overreliance on guests is starting to become more apparent; there hasn’t been a guest-free episode for the past 15 weeks or so. As the featured guests have often been returning guests, it’s only natural to wonder if Running Man will expand beyond South Korean guests. They’ve done it twice, so why not more? But the truth is that Running Man has no real need to invite foreign guests onto the show. Though ratings have dropped, they’re not in a perilous situation and they’ve already cornered the domestic and international markets. They have no need to spend extra money on translators and foreign guests. Still, a fan can dream.

Who would be your dream Running Man guest?