Odd Eye debuted last month with a rare concept — blending pop and classical music — and their name reflects this fusion. Odd Eye refers to having eyes of different colors but the girls relate it to their passion for both genres of music. The three members have majored in classical music: Yi Eum, the leader, plays cello while Hayule and Miki (main vocal) play violin. Though their first single, “Catch Me If You Can,” garnered mixed reactions, they are back with a second MV to continue fusing classical and pop.

The MV begins with quick shots of the members. When the singing starts, we get Hayule playing violin intercut with shots of her and her mouth. Hayule’s background scheme consists of sunrise colors — reds, pinks, and yellows — with spinning white circles. She’s also the only member to look lost. This may have to do with the lyrics but at the time of writing there are no translations so I cannot say for sure. 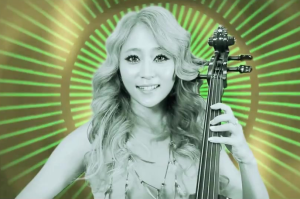 The music video then transitions to Yi Eum playing cello and dancing. Throughout the first chorus, Yi Eum and her eyes are the focus; her eyes gaze into the camera and engages the audience. Her eye makeup is accentuated more than the other members to strengthen this gaze. Yi Eum’s palette consists of gold and green and reminds me of midday. In some parts, it looks like the gold is actually light from the sun with clouds in the sky. The circle theme continues here but instead of spinning, the lines radiate out from the center. This is also accentuated on the floor when she walks.

Whereas Yi Eum’s gaze conveys confidence and control, Miki looks at the camera in a shy, cutesy way and her expressions convey innocence and playfulness. Miki’s coloration is night- blues and black. There are also white sparkly lights that cause the background to burst forth. Her background circles are water-based and in some shots  there are water droplets frozen in midair.

We then get about 10 full seconds of the girls playing their instruments before the MV goes to the girls singing and dancing. It’s a cute dance party and actually feels fun even though it is a little cheesy. This is also the only part of the MV where the editing is poorly done — by their outlines, you can clearly tell that the members are standing in front of a green screen. The MV ends with the three walking towards the center of a circle with the camera focusing on their lower halves. 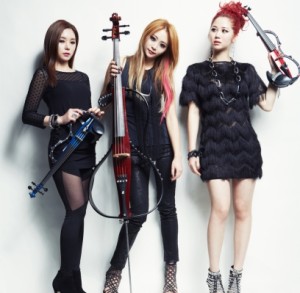 To put it bluntly, this music video is boring. Don’t get me wrong, I love the transient, ethereal editing but there’s nothing really going on. In fact, the performance version is more interesting and it showcases their instruments much better. “Follow Me” was pleasant enough to watch but it’s definitely not going to stand out from the crowd. And that’s OK. I don’t think a story MV would suit this song at all. But in the future, Odd Eye will need to do something more than just effects and editing.

And it’s impossible for me to review “Follow Me” without comparing it to their debut song, “Catch Me If You Can,” simply because Odd Eye doesn’t have a definitive sound yet. The group wants to blend pop and classical music but that itself is a broad definition and they can choose to go in many directions. “Catch Me If You Can” is a frantic, harrowing piece while “Follow Me” is mellow and melodic. Although “Catch Me If You Can” was not well-suited to the girls’ vocals, it seemed to showcase the members’ instrumental talents much better. “Follow Me,” on the other hand, is more pleasant and likely to appeal to a wider range of people. But what it all comes down to is which direction will Odd Eye take? I’m hoping they take a middle-ground approach with both extremes present on future albums, but we’ll have to wait and see how their fall album release goes.

Hearing “Follow Me” for the first time gave me Clazziquai flashbacks, but Odd Eye have managed to make the song their own. Soothing and pleasant, this song is a feel-good song and would be great to relax to. Unfortunately, as much as I like the music video, I acknowledge that it has its drawbacks — namely it being boring. The editing also could have been refined in some parts. Overall, though, I’m really interested in this group and I hope their future releases will improve.