The “Luv Virus” Makes For a Great Cure

While SKarf has enjoyed surprisingly high levels of support from Singapore, from where two of their members hail, it could be safe to say they are not exactly the highest-profile act in the extremely competitive K-pop girl group market. Hopefully though, their latest single would help raise their profile as a decent alternative to the current crop of girl groups.

You see, if you are tired of either the mish-mash of layered electronic sounds (think any high-tempo release after SNSD’s “I Got A Boy”) or the overt displays of sexy (which is very much dominated by Sistar and Girls’ Day), SKarf has the answer.

The inoffensive drum/synthesizer combos and the pleasant harmonies seem to help K-pop listeners return to a time when the music just made for relaxed listening with work, instead of being overtly jarring and forcing the listener to figure out what is going on. 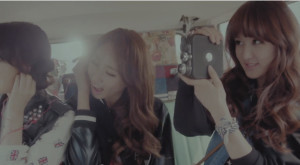 While some might call such compositions clichéd and the surest way to obscurity, there is another school of thought that people are inclined to stick with what they are comfortable with listening, and such songs would still have their appeal.

The music video also follows the same approach taken with the song, with a (rare by today’s standards) video that is non-sexual or non-forced swagger by nature, instead focusing on a slice-of-life/road trip story. Granted, we may have seen the road trip story one too many times (SIStar’s “Loving You” being the most memorable of recent attempts) but there’s no harm sticking with a tried and tested formula.

Sure, the budget they are operating on is a lot smaller in scale (judging from the lack of crowds in the music video and the outdoor location being deliberately obfuscated), but well at least the plot is rather coherent (for the most part). The props chosen also suit the context of the story, apart from the rocking horse.

A rocking horse? Seriously, who would bring such a random large object out on a field trip? And would anybody above the age of 10 actually bother with riding on one, much less out in public? 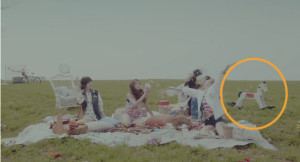 I also liked the cinematography for the music video. The soft focus lens appeared to give the video a relaxed feel, and muted the colours such that they appear pleasant and soothing to the eye, serving as a nice contrast to the hyper-sharp and garish visual approaches of recent music videos.

Considering the laid-back nature of the song, it would come as no surprise that the choreography is just as relaxed and only comes into play near the end of the song. Even then, the dances comprise largely of simple leg hitches, hand movements and of course, looking coy in front of the camera. While the minimal choreography might make keeping music show audiences engaged a challenge, it makes for an interesting change where the music video is concerned.

In my review of SKarf’s debut single, my comments largely centred on how the group chose to play it safe at the risk of being boring. A year on, the strategy is still the same, but in a time where girl groups keep pushing the envelope of what is possible (with varying degrees of success), playing it safe might actually pay off. By catering to a select nostalgic group who just like “the good old days of sweet and pleasant girl group K-pop”, SKarf might have just found their niche. For that, and for being an enjoyable break from the past few releases, this song (and MV) gets a 3.8/5.