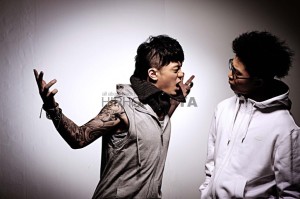 TBNY stands for ‘The Basement Noise Yellas’ or ‘Topbob’n’Yankie’, a duo made up of, as you might guess from the second name, Yankie and Topbob (now of 2winS). The duo was formed in 2002, though both members have had high activity since 1999. In the year after formation, they released their first EP, Prosac. Their first full length album, Masquerade, came out in 2006, followed by their second album HI Side-A in 2008. In 2010, Topbob joined Bumkey to form 2winS, causing TBNY to be put on hold. Since then, 2wins and Yankie have both released music individually and have continued to feature in the songs of others, under Universal Music Korea and Amoeba Culture, respectively.

Since TBNY has been there early on, with other big names of The Movement like Dynamic Duo, Drunken Tiger, and Leessang, they’ve been a part of the larger group that’s been molding K-hip-hop into what it’s become today. Their music strongly resembles old school hip-hop, and is based around great beats that go with their raps. Topbob’s voice sounds like it’s almost whiny, but it doesn’t get annoying or really anywhere close to that. Yankie’s voice is thinner, and his raps generally sound faster and more aggressive.

First up is “Memento” off of Prosac. The music is grand and as strong it needs to be to accompany the strength of the rapping.

Also from Prosac is “Illusion,” featuring Lady T/Tasha/Yoon Mi-rae. A tad slower than “Memento, the song is powered by a steady and interesting instrumental. Tasha’s rap feature is entirely in English and is also the last set of clear lyrics of the song, leaving it on a powerful note.

“Natural” is from Masquerade, but a shortened version of it was previously found on Prosac. The faster pace works out well for the song. The use of brass helps creates that throwback feeling in the catchy chorus.

Next is “L.I.E.” featuring Epik High, also from Masquerade. The song has this jokey feeling about the music, though the lyrics are definitely a bit more on the serious side. And it is a treat to hear Mithra Jin‘s pronunciation of “L.I.E.”

“Attention!” featuring Dynamic Duo and Tablo has no mercy. Because of the mentions of emcees and the timing of release of this track in this album, the song has been considered by some to be a diss track against MC Sniper. Regardless of intent, the lyrics are tight and have some of the best verses I’ve seen.

“Take My Soul” features Yeo-jung and provides a slight break from the stronger beats of most other songs on Masquerade. The song is smoother, largely due to Yeo-jung’s feature as the vocalist, who adds a heavy R&B flare to the chorus.

Last is “Slowly,” featuring Mellow off of HI Side-A. The duo’s style in HI Side-A takes an electronic turn, allowing for more experimentation with beats. The rapping is softer here, accompanied by Mellow’s breathy voice, which creates a lighter and more thoughtful-sounding song.

All of TBNY’s songs do not disappoint. They’re a solid choice for a listen, so all three of their albums are highly recommended. It’s a tad unfortunate that their potential return is uncertain and fairly slim at best, but individually, the two have kept working, which is delightful. As far as I’ve seen, Yankie has been more active than Topbob, releasing his solo albums, keeping up with features, and participating in Amoeba Culture’s NOWorkend project. Hopefully there will be more from the two in the future, sooner than later if we’re lucky.

What do you think of TBNY, readers? Are you interested in hearing more of their music? Leave a comment with your thoughts!