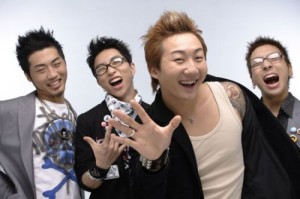 This week’s K-pop Indie Gem is a “no brainer” for Korean punk-rock enthusiasts — No Brain. The group, composed of members Bulldaegal (vocalist), VOVO (guitarist), BBogle (bassist), and Hyoonga (drummer), started out performing in Hongdae in the mid-nineties. They’ve grown to become one of Korea’s biggest punk bands, and they’ve taken their performances to SXSW, Seoulsonic, and countless other venues in and out of the country. Being a longstanding band as they are (with a discography that’s 20-albums-or-so-long) it’s pretty much impossible to try to get a really good variety of their music to feature here, so I’ll focus more on their recent releases.

Big Bang, and punk. That might sound like a weird combo these days, but given the old Big Bang, it’s not too farfetched.  “Oh My Friend” is a basic, rock-inspired K-pop song, fitting right in with the 2006-2007 rock craze in K-pop (remember all of that SMP?). All that Big Bang stuff aside, “Oh My Friend” gives a nice taste of the punk sound of No Brain without actually listening to their songs. It’s masterfully delivered to boot. If you like it, stick around for the rest, as it only gets better.

This is probably my favorite song from the group, and is loads of fun to watch and hear. It’s one of those upbeat, feel-good kind of songs perfect for a summer day.

“One Cup of Soju”

Remember how I just said that “Necktie” was my favorite song? Can I take that back for “One Cup of Soju”? This song is hilarious and all sorts of insane. No Brain literally knocks out their lead singer and then rocks out like no one’s business… or maybe they’re just drunk.

Really though, I’m serious about the “knocking out the lead singer” part! Watch the epic kick from Hyoonga in this awesome live performance.

This is the song featured by SXSW on their youtube channel. At 2013’s SXSW, No Brain performed “One Glass of Soju” and “You Have a Crush on Me.”

Not all of No Brain’s music is high-energy, and here is an example of a more mellow song. It’s more along the reggae style as opposed to punk.

“My Luck is Great”

There are some perks to being the biggest punk-rock group in Korea, such as being featured on OSTs. This song was part of the OST for Hong Gil Dong, a Hong Sisters drama starring Kang Ji-hwan.

So that’s it for this week’s K-pop Indie Gem! Keep No Brain under your radar and let us know whether they have brought out your inner punk in the comments.