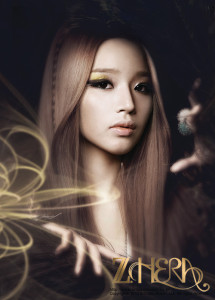 May has been an amazing month for veteran comebacks, so you may not have noticed two debuts from boy band LC9 and soloist Z.Hera. While the two appear completely different as far as image is concerned, they’ve both debuted with large expectations in a hotbed of sunbaes, with mixed results.

First up is Nega Network’s new boy group LC9, a.k.a. League of Competition #9. The name is meant to reflect the harsh and competitive process the group went through as trainees. Before revealing their official name, the group was touted as the next Brown Eyed Girls, earning them the nickname “Brown Eyed Boys.” With such a comparison, LC9’s debut was expected to show off some powerful vocals on par with their seniors.

Instead they released the repetitive electronic dance song “MaMa Beat” (feat. Ga-in) as their first single. The music relies so heavily on electronic elements that it brushes the line between run-of-the-mill pop and EDM style. It’s not a bad idea to play with a different genre to catch attention, but it doesn’t help if the song is unvaried to the point of boring. “MaMa Beat” suffers from a very prominent three-word hook and music pattern, making the rest of the verses soft and forgettable by comparison. For a group that seemed to proclaim strong vocals, “MaMa Beat” does not do their voices justice, which is unfortunate considering the rest of the tracks on their mini-album SKIRMISH do. However, there is no doubt the song is frustratingly catchy and extremely danceable. It’s a great vehicle for the boys to exhibit some rookie energy, and is guaranteed to get stuck in your heard whether you want it to or not.

The MV has garnered attention for its 19+ rating due to its Fight Club premise. Long story short, the boys beat the tar out of each other for the entire video. This houses several problems, the first being that nothing related to the music drives the video. While the concept fits with the lyrics, which could apply to either the cut-throat music industry or the next MMA fight, there are no shots of the boys singing, dancing or showing off their personalities. This is odd for a debut song that is so dance worthy, but I guess that’s what dance versions are for. The camera cuts and action also don’t follow the beat, reducing the music to a soundtrack and making the vocals take even more of a backseat. The main focus is the visuals, which do work in that the looks are striking and the hair is hilarious; however, this leaves us with an MV that doesn’t include the “M” part. 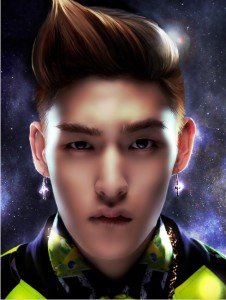 While the video is violent, it is cartoony and unreal. From the B-horror movie sound effects and blood splatter, to the Dragon Ball-style punches, the fighting is wholly without consequences. Rasa is bashed repeatedly with brass knuckles, hit square in the head with both a brick and lead pipe, yet doesn’t go down. An ax gashes E.Den‘s shoulder, yet it refuses to bleed beyond the initial splatter. The unrealism is perhaps a positive in that it doesn’t make the watcher sick, but the overall violence brings into question of purpose. It’s obvious the group wanted to go with an aggressive image, but beyond taking the lyrics to an extreme, the MV is violence for shock-value, making it as shallow as the song. The MV ends with the boys laughing, placing the audience in the uncomfortable situation of watching extreme violence portrayed as fun without any deeper commentary.

LC9 might have achieved the rookie goal of making an impression with their video, but if the “MaMa Beat” MV is a person’s only exposure to them, they’ll be getting a whole lot of visual without much substance.

On the poppier side of things, CJ E&M’s latest rookie Z.Hera (Ji Hae-ran) recently debuted with “Peacock.” The “Hera” part is a nod to the Greek goddess, and the “Z” is just for funsies, apparently. The peacock is also a symbol of Hera, so it’s nice that there was a little more thought behind the song title on CJ E&M’s part.

Since rookies can’t escape comparison, 18-year-old Z.Hera’s already being paralleled to BoA. While this sets the bar unrealistically high, it’s easy to see why the comparison is made as “Peacock” illustrates Z.Hera’s distinctive voice through pure poppy goodness reminiscent of young BoA’s repertoire. The most striking sound in “Peacock” is the color of Z.Hera’s voice, which has a love-it-or-hate-it quality. CJ E&M describes it as “young,” which really translates into rough and unpolished. She lacks the ease of control between upper and lower registers of a more experienced singer, which muddles her natural timbre. However, while Z.Hera stretches for the high notes, her lower register has a nice depth.

The MV is a mishmash of various scenes, following a loose story line of Z.Hera unlocking her inner potential like the lyrics of the song vaguely describe. She first lies on an old rug, looking despondent and unmotivated. Then a metal bird in a cage emits a magical glow, which streams through a keyhole to show what is the inner light of Z.Hera. Here she dances in a colorful setting and does random “young girl” things. Blowing bubbles! Pushing a bike! Picking out sunglasses! Then she ends up in a magical white-on-white room with a magical tree that she got to through her magical closet. That’s a lot of scenes without much of a connecting thread. The song is about destiny and soul searching, so that may account for the ethereal white world at the end, but mostly the changes end up looking random and disjoint. The imagery suggests that the MV wants to be more than a performance video, but it fails to achieve cohesion and clarity with its metaphors.

The most eye-catching part of the video is the dancing. The MV does a good job of showing off the dance with minimal jerky camera cuts, yet without becoming solely a dance MV. Unfortunately, this changes at the most interesting part of the dance during the electronic break. Z.Hera is supposed to show off her skills here, but suddenly her movements are obscured by darkness, fire hydrant rain and slow motion cuts. I’d suggest checking out one of her live performances, where the sharpness and style of her dancing is more apparent. 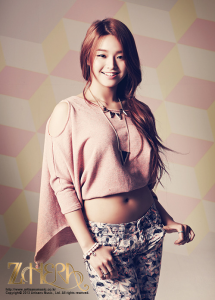 The video hits all the write notes in that it focuses completely on the rookie. It highlights Z.Hera’s dance talent and shows her in a cute, energetic fashion. However, with K-pop being dominated by groups right now, a solo debut has to pop to catch attention with stellar vocals, stunning visuals or both. At the moment, Z.Hera’s “Peacock” shows off neither, sinking it into unfortunate mediocre territory. While the video hasn’t left a big enough impression to stick out, Z.Hera does display talent and charisma, even if it is a little undeveloped. Her challenge will be lasting long enough to become the powerhouse that she could be.

In one way, the MVs suffer from opposite problems: LC9’s MV relegates the music and dance to the background and only focuses on visuals, while Z.Hera’s only makes the dancing work and the visuals are disjoint. On the other hand, they both result in MVs that are just okay, if a little questionable or confusing. For middling results from rookies that are clearly talented, I’m giving both MVs a 3.

Readers, what do you think of these rookie debuts? Is LC9’s MV too violent? Could Z.Hera be the next BoA?