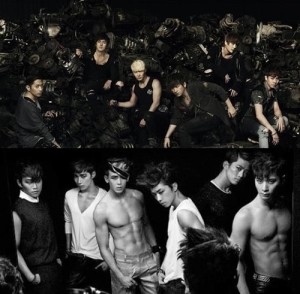 This week has both Shinhwa and 2PM comebacks on music shows, allowing for a head-to-head showdown between the representative beast idols from different generations. The two have previously faced each other on MBC‘s God of Victory, a face-off that ended in victory for 2PM and 1,000 lunches for some lucky Hottests in celebration for 2PM’s comeback. But this week in music comebacks pits Shinhwa’s “This Love” against 2PM’s “A.D.T.O.Y.” to see which of the most masculine captures the stage.

What’s interesting about these comebacks is that choreography-wise, both have gone a more restrained route. Shinhwa incorporates voguing into their performance: an unexpected choice and also one that cleverly replaces more strenuous choreography to cut down on injuries. Though initially I had my doubts about how the style and more restrained movements would translate on stage, I shouldn’t have been worried. The entire performance comes off as sophisticated and sensual, with the six men owning all the moves.

Music-wise, Shinhwa has kept with their usual dance pop, and their title track bears some similarity to “Venus” in this respect. But “This Love” lets the vocals come out much more strongly and overall gives a strong impact. The song is catchy and very much within Shinhwa’s own style showing that the men still got it.

2PM, on the other hand, focuses on more hip movements, surely pleasing their fangirls. They also use some chair choreography, though their use isn’t anything innovative. While the choreography is sensual, for a comeback after almost two years it seems lacking. The group has impressed largely due to their boundless energy on stage with large movements and occasional incorporation of acrobatics. As such, to comeback with something like what “A.D.T.O.Y.” brings is disappointing.

However, 2PM is no slacker in the music area. “A.D.T.O.Y.” is fraught with tension and represents a return to a darker and emotional 2PM. The falsetto carried out by Junho and Nichkhun a bit past the halfway point was an excellent addition and is one of the best parts of the song.

On the note of choreography and stage presence for their comeback, I’d give Shinhwa the win. On the point of music, it remains a tie for me. For what we think here at Seoulbeats about the music videos and albums, check out our Grown and “A.D.T.O.Y” reviews, and stay tuned for a review of Shinhwa’s eleventh!

But in the meantime, what do you think about these two comebacks? Is there a group that shined more than the other for you?