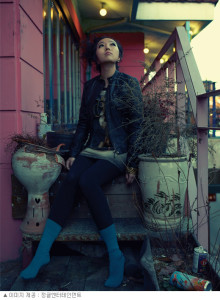 With the recent shaking up of the We Got Married couples comes the “real-life” couple Jo Jung-chi and Jung In, a couple that has been in a relationship for more than a decade. They are the second real-life couple to join the show, following in the footsteps of SG Wannabe‘s Kim Yong-jun and actress Hwang Jung-eum from the second season of the show way back in 2009.

Having another real-life couple on the show is most likely part of an effort by the producers to re-establish a feeling of sincerity that was broken by the recent scandal between Lee Jang-woo and Oh Yeon-seo, which presumably led to the premature departure of the JoonSeo couple from the show.

Setting the obvious paradox of sustaining fantasy with reality aside, the addition of this couple to the show is great in that it introduces new audiences to two up-and-rising musicians in the Korean indie scene. Since some of you — especially international fans — may be unfamiliar with just who they are, let’s take a look at their work as musicians outside of We Got Married thusfar. 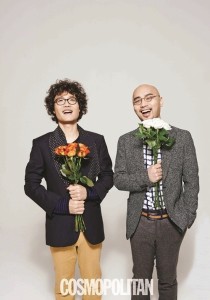 Jo Jung-chi is a guitarist and singer/songwriter under the music label Mystic 89, who has been active in the indie/folk scene for quite some time. He also recently re-emerged to the public spotlight through a notable appearance on MBC‘s Infinity Challenge. He is currently a member of the band ShinChiRim.

Trio band ShinChiRim (an eponymous acronym of members Yoon Jong-shin, Jo Jung-chi, and Ha Rim) originally started off as a project group between just Yoon Jong-shin and Jo Jung-chi, who worked not only as performers, but also producers arranging music. As composers, they have made contributions not only to the indie scene, but to the K-pop scene as well.

In 2011, the duo teamed up with multi-instrumentalist Ha Rim (on accordion) as well as Superstar-K2 contestant Kim Greem (vocals) for Yoon Jong-shin’s September 2011 project.

Not long after, Ha Rim became the official third member of the group, and while Kim Greem has been making a successful career as a soloist, she still maintains a close working relationship with the trio, even appearing with the band on a recent episode of We Got Married.

In addition to being an active member of ShinChiRim, Jung-chi is also a member of the rock band 친목도모 (formerly known as Green Cheese). He has also simultaneously been active as a soloist, having released his first solo album Our Beautiful Love Story in July of 2010, as well as his second solo album Posthumous Work in January of 2013, with title track “When Winter Comes” (featuring Jung Joon-il).

Jung-chi’s other half, Jung-in (who — fun fact — has managed to make a successful career as a singer despite being deaf in one ear), first made it into the mainstream spotlight in 2002 as the featuring vocalist for my favorite Leessang song of all time, “The Woman Who Can’t Say Goodbye, the Man Who Can’t Leave”.

From 2004-2008, Jung-in was the lead singer of 5-member R&B group G.Fla (Groove Flamingo). She has also featured on songs with a number of well-known artists including Brown Eyed Soul, Dynamic Duo, Bobby Kim, Drunken Tiger, and Tasha.

In 2010, she debuted as a soloist under Jungle Entertainment with her first mini-album Jung In From Andromeda and title song “Hate You“. My personal favorite from the album is “Show!” which features Clazziquai‘s Alex as well as Tablo.

In 2011, she released an EP entitled Melody Remedy whose title track “Rainy Season” (Monsoon) explosively swept the charts and went on to become a summer hit. Jungle Entertainment also released a live acoustic rendition (with Jung-chi playing guitar in the background):

In 2012, in addition to appearing on MBC’s I Am A Singer 2, she also released her third mini-album That Woman whose title track “Those Obvious Words” talks about a realistic love story from the vantage point of a woman. And now in 2013, she gets to show us her real-life love story on-screen with Jung-chi for We Got Married!

What are your thoughts, readers? Are you a fan of the latest “real-life” couple on WGM?