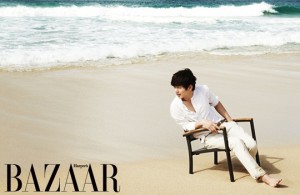 It was another action packed weekend as we head into the ending of February.  Another week of scandals, intrigue, love, drama, photo shoots and K-pop–what more could a fan ask for?  Some of my favorite things that just missed the cut: C.N. Blue challenging Sung Si-kyung in 1N2D, a  little drummer boy playing with F.T. Island on Star King and the incredible Kim Joon-soo and his dad Kim Jong-hyuk taking on a bug in Dad! Where Are We Going?

The following are the top 5 Things in K-pop that happened last week that I thought were a bit more special than the rest.  If you don’t like spoilers turn back now because they most definitely lie ahead.

The men of Flower Boys Next Door continue to be adorable in their pursuit of life and love, the drama–not so much all the time.  This week their efforts included wooing the object of their affection with a dance in full panda gear or soothing their chopstick wielding editor when they tell her their whole next episode (due right now) was wiped out by a power outage and then moving her by staying to help her do damage control.  Anyone else aboard the Oh Dong-hoon & Kim Seul-gi (editor) ship?  I LOVE this couple.

Sure everyone is excited over SHINee’s comeback, but perhaps no one is excited as SHINee themselves?  The boys showed their awesome performance skills as they continued performing like pros even with a mic mishap on M!Countdown (why is it always mic troubles with SHINee?).  I didn’t even notice the mishap while watching the performance which only goes to show how good they were at covering it up.

And the boys were super cute as they helped SISTAR 19 celebrate their latest win on KBS‘ Music Bank by warming up the girls’ glass table.

One of the favorite acts in this season’s K-pop Star 2, the Raccoon Boys, put on a stellar performance of Beyonce‘s “Love on Top” in their fight for K-pop superstardom.  The trio is known for their awesome covers and this performance was no exception as they advanced into the Top 8.

For a segment on last week’s episode of Weekly Idol, BTOB‘s Il-hoon and MC Jung Hyung-don had a showdown as they tried to get a reaction out of a female PD with their “sexy” dancing.

1. No free gifts at this wedding shower

Comedians Yoon Hyung-bin and Jung Kyung-mi got married on February 22nd and for the latest episode of Qualifications of Men, of which Yoon Hyung-bin is a cast member, the cast shot highlights at the couple’s wedding and had a little wedding shower-like segment.  In the segment, each of the members took on Hyung-bin at various tasks or games and if the member lost to Hyung-bin they had to buy the couple a wedding gift, a very expensive wedding gift–shouldn’t these guys have tried harder at losing? Do coffee machines really cost 1,639,300 won (a little over $1,500)?!  It was a lot of fun–maybe every couple should have to play for their gifts… kidding.