Streaming to Be Heard: K-pop on Internet Radio 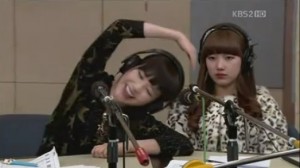 nspired by a recent Seoulbeats Roundtable discussion on discovering K-Pop, I started thinking about my own exposure to foreign music.

Though YouTube‘s advent in 2005 helped catalyze my education, I first learned about Korean artists from listening to Internet radio.  Streaming foreign music, however, comes with many potential problems, including international licensing restrictions and character display settings.  I remember the frustration of hearing a song I liked, only to see the ominous <Unknown> – < Unknown> tag displayed on my screen.

Almost a decade later, personalized streaming radio services are as sophisticated as they are ubiquitous, and almost all use their florid features to tempt listeners into buying premium subscription services.  While some allow subscribers to create their own playlists, what all of these services really emphasize is the ability to discover new, relevant music.  Each has a wide array of Top 40 and indie hits available, but I wondered how the services would measure up in playing non English music.  Are the premium services worth it for streaming Korean music?  I decided to review 8 popular music streaming services, trying to put myself in the shoes of a new K-Pop fan. 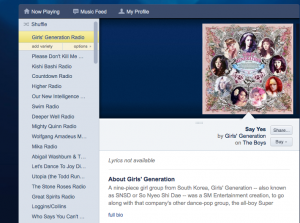 For use in: US, but limited service in Australia and New Zealand

Pandora’s one of the oldest names in the personalized streaming radio market — and with good reason.  It has a large library, stable (if not lightweight) streaming, and a complex set of algorithms designed to identify features of music each listener finds appealing. Without a premium subscription, however, the ads can get fairly overwhelming.  The available K-pop artists are largely restricted to those with a sizeable international presence — SNSD has a huge catalog, but even groups like Jewelry are underrepresented.  2 hours listening to “Girl’s Generation radio” found the service successfully playing almost entirely K-pop songs, many by female artists.  While I didn’t find any new songs, Pandora did seem to do more than just play “K-pop” songs, actually adapting to the songs styles I like.  Still, the audiovisual onslaught of the advertisements every few minutes was distracting from a fully pleasant listening experience.

Verdict: Use when you have the cash to spend on a premium subscription or the processing power to withstand the advertising assault. 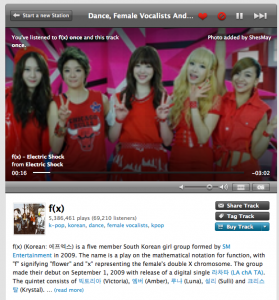 For use in: US, UK and Germany, limited service elsewhere

Compared to Pandora, Last.fm adopts a Montessori style of music discovery, allowing the listener more input and feedback into their radio habits.  Last.fm’s real strength, however, lies not in streaming but in discovery, and it has a comprehensive back catalog emphasizing less popular groups. Users can suggest up to three categories to constrain the radio’s playlist, then allow the station to evolve by liking or disliking tracks. However, the skip limit that came into effect in August 2012 has soured many people’s views on the product. For non-premium members, the ads have gotten a bit overwhelming, playing before every station starts, and at intervals of every 5-6 songs.

K-pop has a strong representation, and the service has a large enough diversity of artists that finding new music in this genre is almost guaranteed.  However, if you play a “K-pop” radio station, you will hear a combination of current top hits, obscure B-sides from the 1990s and occasionally even some instrumental tracks thrown in.  While tags like <5000 listeners allow you to specifically listen to obscure tracks, there is no way to restrict your listening to mainstream K-pop.  This might be frustrating for someone new to the genre trying to gain exposure to the highlights.  For more seasoned listeners wanting to explore new music, however, it’s hard to beat last.fm.

Verdict: Use if you want to hear Korean Christmas songs by female vocalists, indie-influenced country music popular in Seoul, or any other specifically strange combination your brain can invent.

Grooveshark, the most questionably legal of streaming services, is immediately appealing for its virtual lack of restrictions on song choice.  Songs can be played on demand and restarted without limits. The ads are predominantly visual, but can distractingly fill the screen with movement. K-pop tracks are abundant, but thanks to an emphasis on self-curation, the site lacks organization. T-ara, for example, are listed under at least two dozen names. The artist biography for 1990s K-pop group S.E.S. also sounds strikingly familiar to Bruce Springsteen’s. Music discovery is a recent feature of Grooveshark, and one with much need for improvement.  “K-pop” is a category, but not all K-pop artists are labelled, and many Japanese artists are mislabeled as Korean.  Grooveshark is useful for exploring older albums from a newly-discovered artist, but less useful in finding new artists themselves.

Verdict: Use when you are sick of YouTube taking down your favorite audio tracks. 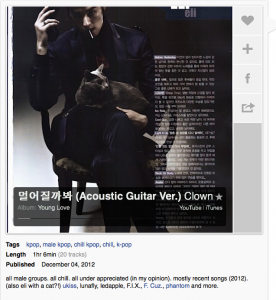 8tracks is a lesser-known service that depends on other other listeners to upload tracks and create playlists.  This means that real people are not only creating playlists, but putting the tracks in a meaningful order. While it’s a neat idea, I found varied results.  Unlike any other service on this list, 8tracks has occasional problems with sound quality.  I listened to a few tracks that sounded like they had been recorded from YouTube at 64kbps.

The back catalog is not as extensive as Grooveshark or last.fm, but it is rapidly expanding.  However, there are already some great K-pop playlists, including my new favorite ‘K-Pop Disco Party.’  While it’s not a top site yet, I see potential for this becoming a great resource for new fans to learn from seasoned ones.

Verdict: Use when you want a cohesive listening experience.

The most popular option worldwide, Spotify is a powerhouse of Top 40 hits and indie songsters.  It’s lightweight, well-designed and intuitively navigable, making for a pleasant user experience.  It’s also highly social, easily linking with facebook and blogs. Compared to many of the other options, K-pop songs are well curated. There are virtually no ‘unknown character’ issues, and different iterations of the same artist’s name call up an identical display of songs.  However, the artists represented are fairly limited, and it’s hard to find albums that are more than a few years old. If you are brand new to K-pop, there’s enough there for a basic education, but more frequent listeners will soon find the selection lacking. For discovery, there is a radio service, but I found that it struggles to differentiate among Asian artists.  After an hour of listening to ‘Girl’s Generation radio’ I had heard only 3 K-Pop songs, in addition to 4 Japanese songs and 2 Chinese songs.

Verdict: Use when you want to get Facebook friends hooked on the next big Hallyu stars. 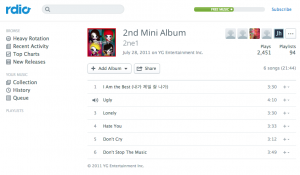 For use in: US, Canada, Australia, Brazil and most of Europe

Rdio is visually stunning, especially on tablets where the album art-led navigation is very effective. Like Spotify, Rdio allows you to designate tracks for offline listening.  Though I was finally able to find a few K-pop tracks, the major drawback to this service is the range of foreign artists available for streaming. With the exception of BoA, each artist is represented by a few songs from recent albums. Reviewers praise the service for its music discovery abilities, but I’ve never found their algorithms particularly effective at proposing music I like.  After practically exhausting their Korean music selections in two hours, the discovery service had only one relevant recommendation…Psy.

Verdict: Use when you want to pay through the nose until you bleed from the ears, to hear “Gangnam Style” on repeat. 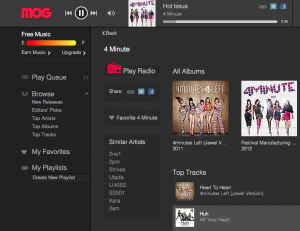 For use in: US, Australia

Mog’s offerings are almost identical to Rdio’s, though the user interface pales in comparison.  The selection of K-pop songs is slightly worse and much less organized. I listened to ‘KARA radio’ for an hour and only heard two K-pop songs, both from 2AM‘s 2011 album.  There were songs from a KARA, but they turned out to be from the debut album of Christian pop singer Kara Williamson-Tualatai.

Verdict: I cannot think of a good reason for K-pop fans to use this service. 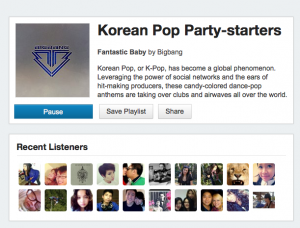 Songza is a fairly recent addition to the music streaming world, but it bears mentioning because, unlike the rest of these services, it is 100% free.  No premium services, no subscriptions, no option to pay to remove ads. Advertising, while present, is minimal, and doesn’t detract from the listening experience.  The concierge-styled service is playlist-based, so you are limited to a pre-selected song order.  Among the thousands of playlists, one is made entirely of K-pop songs, and several others  predominantly feature K-pop hits. Compared to services like Spotify, Songza has a breadth of artists, and a good mix between recent and past hits.  It’s selection also favors more commercially-successful songs, so it’s an excellent starting point for new fans seeking an overview of the genre

Verdict: Use if you want a basic, free service to start your K-pop education.

So, do you agree?  Are there any services that I’m missing?  I’m especially keen to hear about Deezer and Fizy’s K-pop selection, as they are not yet available in the US.