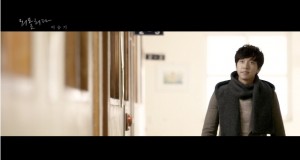 After a whirlwind year of hosting, acting and hawking almost any known product, it’s time for Lee Seung-gi to go back to what he was first known for – singing. One reason to give Lee Seung-gi’s newest single “Return” a listen would be his slightly renewed musical approach. Having switched producers from known balladeer Bang Si-hyuk (Hitman Bang) to Indie composer Epitone Project, it would be interesting to hear what changes there would be.

And for the most part, the changes are for the better. Where Bang Si-hyuk’s ballads tended to draw most of their emotional punches from the vocalist’s belting, the Epitone Project tends to call for more nuanced, fine tuned vocal deliveries. This style suits singers who are in the midst of evolving their singing abilities, which is just what Seung-gi would do good to have at this stage of his career. After all, belting is not the only mark of a good singer and being able to convey emotions befitting one’s years is just as important over time.

I also liked how the song’s composition did not play up to the clichés of ballad, by not sounding overly sappy or melancholic, or let the song be dominated by one aspect of the song. Instead, the gently swelling piano and simple instrumentation just to do the bare minimum, allowing the vocals to shine through. It also helped that the lyrics portrayed a different side of sensitivity. Instead of touching on the usual topics of love found or heartbreak, it chose to look at the mixed feelings on reminiscing about one’s first love. Of how the memories are still so fresh, of simple moments spent together and of how with hindsight it was not to be. By far the most poignant lines though, would be ones near the end (Where are we now?/Were we happy?). This part really speaks for most of our feelings toward most of our first loves. Though the parting was amicable, and that getting back together again after so many years would be impossible, we still wish them well in their lives, and are always curious about their fates.

And that’s not mentioning the music video, which simply complement the song. While the premise is rather simple, with Seung-Gi driving to a secluded spot, and opening a metaphorical door to his memories, it’s the execution of the flashbacks that make the video so compelling. 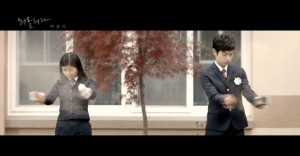 Anyone who has had a first love or crush on someone could relate to the little moments portrayed. Willingly partaking in corporal punishment just to have a little more time with your crush? I sure did that before. Feeling those little pangs of jealousy when you see another person getting close with your “loved” one? Definitely. Or willingly standing up against your friends or whoever tried to bully your first love? Of course.

Another moment that also hits hard is how that budding love came to an end through circumstances entirely out of their control. I am pretty sure anybody who has seen a good friend leave due to a school transfer or change of environment could totally emphasise with that. It also helps that the acting (featuring child actress of the moment Kim Yoo-jung) very nicely captured the mood of the flashbacks, where the expressions of love are so innocent and sweet in nature, as well as how the actions are convincingly naïve in their actions, like how we approached our first loves.

About the only thing that stood out as jarring in the video was the parting gift. While I get the symbolism behind the piano key, and how she was like a missing piece in his life, it just seemed too odd as a parting gift. Besides it’s clearly vandalism to steal off school property to give it off as a memento.

One last thing: We all know that Lee Seung-gi probably is the face of advertising there, but does the subtle product placement even have to happen in the music video? Swore that almost everything, if it could be made by Samsung, was by them. Then again, I guess he had contractual obligations to fulfil.

Still, if the only criticisms of the music video are so minor, then I would have to admit that I am very impressed with this release. With singing that reflects Seung-gi’s further refined abilities, and a message that many will have in common with, “Return” gets a well-deserved 4.8/5.