Counting and Takkbam-ing Your Way to Variety Fame 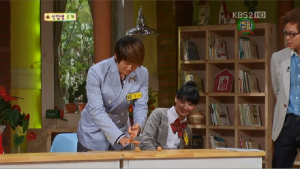 If you watch any K-pop variety shows, you have undoubtedly seen your favorite idol doing the same trick over and over at the request of hosts. These “talents” range from impersonations, to eating fast, to random magic tricks, and are a staple of the idol variety circuit. To be successful in the variety world it is important to have a shtick, character, or joke that you can have ready at any time to show off your funny or interesting side so that the cameras will stay focused on you and won’t cut to someone else. Some idols come by this more naturally than others, but even if they don’t have a naturally outgoing personality, by having a certain talent they can make themselves a niche on the variety shows. The only problem is that after going on multiple variety programs, these tricks can get a little old, so it is important for idols to evolve as time goes, or the audience as well as the hosts may get bored. However, without these little defining talents, no matter how hackneyed they may be, the K-pop TV world wouldn’t be the same.

Lots of K-pop idols do lots of hilarious things on variety shows, but there are certain “talents” that become the equivalent of a household product, like Onew of SHINee’s famous spicy ttakbam (a forceful finger slap that is used to crack nuts and hit people in the head ) and most recently BTOB’s Ilhoon’s “gwiyomi player” (a cute way of counting).

With both variety talents, once the idol showed it on TV it became something they were expected to do it all the time. Unlike Onew’s ttakbam, however, Ilhoons gwiyomi player has also been picked up by other idols (because unlike the ttakbam it doesn’t take a middle finger of steel), and likewise a cornucopia of videos of K-pop idols counting with adorable hand motions have appeared on YouTube. This may be a good thing for Ilhoon, since he already seems to be getting tired of being asked to do the gwiyomi player himself, so he can pass it off to other idols. This is the first big variety talent trend we’ve seen in a while, but there have been other notable ones in the past, as well as notable individual incidences.

Another common variety talent trend is guy group members dancing girl group dances. The king (or is it queen?) of this is Key of SHINee, although he certainly isn’t the only one he seems to be one of the ones most often asked to display this talent and the most likely to do it justice. Dongho and Kevin of U-KISS are another example of guy group members that have danced girl group choreography on multiple variety shows to the point that it could be classified as a talent. Idols like 2AM’s Jo Kwon and Super Junior’s Heechul fall more into a category of dancing to girl group songs as a joke, and less as a specific talent, because both of them have the 4D personality to rely on for variety shows instead of one specific talent.

As for individual talents, that don’t qualify as trends, there is MBLAQ’s Seungho who has an uncanny ability to fix things. This particularly was seen on MBLAQ’s two appearances on Weekly Idol, where the hosts had him fix a computer, first, and then fix a bicycle the second time. Another common talent is imitations, and Eli of U-KISS is known for his pigeon impression, which may sound strange but it fits the bill for a variety suitable talent perfectly. Imitating a pigeon makes Eli look silly, but it also makes people laugh, which makes the slight damage to his image as a cool rapper idol worth it. Sooyoung of SNSD is also known for her talent of imitating other people, including her fellow group members as well as other famous Korean people.

So what purpose do these talents serve? They make audiences laugh, which makes sure the variety shows get good ratings, depending on the nature of the talent they can make specific idols very memorable, and having a talent gives idols something to fall back if they are ever asked to “perform” something on a variety show. The negative side to these talents? For a specific example you only need to look into Onew’s ttakbam talent; he suffered injuries to his finger due to the constant ttakbam he was performing on shows, and probably the amount he had to practice at home to achieve the suitable finger strength. Less physically harmful but annoying is the frequency of which the idols have to perform these talents. If you consider the amount of variety shows a group will go in while debuting, then promoting, and then in between albums to keep up a media presence, they could be performing their talent to the point that it became a chore.

This seems to be the case for Ilhoon, since he showed his gwiyomi player on Weekly Idol he has been asked to do it multiple times and has made visibly irritated faces about it, as well as beginning to alter it in different ways to keep it interesting, probably more for himself than for the audience.

Not only are idols expected to be talented in their area of expertise in their group, such as dancing, singing, or rapping, but they are also expected to have novel entertainment talents that they can show off at the drop of a hat if they are going to go on variety shows. This is all part of being an entertainer, and that is what a K-pop idol is, an entertainer, not just a singer or a dancer. If they wanted a simple job of just singing or dancing they could have taken a different path, such as ballad singer or a back-up dancer. However, the idol status brings a lot of things with it, one of which is the need to have special talents to show off on TV. Personally, if all it takes to be an idol on variety shows is being able to eat fast, sign me up, because I’ve got that covered. I joke, but seriously, sometimes the simplicity of the things idols do on variety shows is baffling and causes me to think, why I am I watching this for entertainment?

What is your favorite idol “talent,” readers? How do you feel about watching idols do silly things on variety shows over and over again?