2012 in Acting: Underdogs Steal the Show 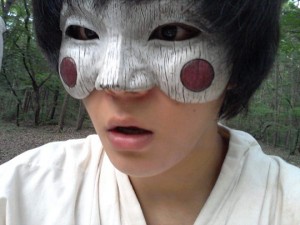 2012 is almost over and it’s time to take a look at some of the year’s best performances in acting. The last twelve months were filled with tears, laughter, and eye-rolls for us K-drama fans, and it’s all thanks to the stars of the strongest dramas this year. But perhaps the biggest surprise to me (when I started writing this article) was how many of my favorite performances this year were by rookie or underdog actors and actresses. Sure, many of the more established actors and actresses put on solid performances in their respective dramas (such as Kim Soo-hyun in The Moon that Embraces the Sun and Park Ki-woong and Joo Won in Gaksital), but the performances that really sparkled and shimmered onscreen came from really unexpected names this year. Without further ado, here are my picks for the best actor(s) and actress(es) of 2012. 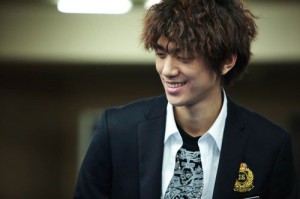 Bang Sung-joon put on one of the best performances I saw this year in Shut Up! Flower Boy Band (be still, my heart!). tvN‘s second installment of their “Oh! Boy” project (targeted at the younger audience) was a solid one. It was fill of grit and angst, but also huge amounts of heart. Sung-joon’s performance cut me right to the core and his acting was wonderfully subtle, but not stoic. I never felt like he was just simply delivering lines off a script, but more like he was Ji-hyuk. I think everyone was a little worried at first about how he was going to fill the hole left by Lee Min-ki‘s character since his took the backseat during the first two episodes, but Sung-joon proved us all wrong. Everything about this drama just felt so real, from the hardships the boys faced as a group to the shy romance between the lead couple — and it touched something deep within everyone, what it felt like to be young and hopeful. Major props to Sung-joon for helping bring that factor to the table. 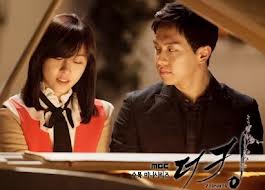 On the heels of Shut Up! Flower Boy Band came the emotional rollercoaster that was The King 2 Hearts, starring two of my favorite seasoned drama actors, Lee Seung-gi and Ha Ji-won. Boosted by solid performances from Jo Jung-suk as Eun Shi-kyung, the stoic bodayguard, and Yoon Je-moon as the whimsically evil Bong-gu, our main couple delighted fans as they navigated political pitfalls between North and South Korea, bickered about everything and anything between fights with Bong-gu’s evil henchmen and bubble baths, and snuck in some drunk kisses in all of that. Lee Seung-gi is a pro at playing the rich spoiled brat (we all know that already, so the first chunk of the drama was nothing new), but what really impressed me was his transition from inexperienced prince to savvy ruler after his brother’s death. He made the serious scenes feel serious, but he also injected a bit of life and humor into a character that could’ve been way too one-dimensional if any other actor had taken the role. Ha Ji-won also impressed with her perfect balance between spunky badassery and typical vulnerability as Hang-ah. Their chemistry together, while unexpected, was just pitch-perfect, and made The King 2 Hearts one of the best dramas this year. 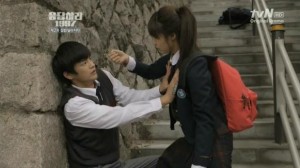 If King 2 Hearts was the perfect combination of tense political drama and suspenseful romance, Answer Me 1997 was its counterpart, full of nostalgic moments from the 1990s, a focus on quirky humor rather than plot, and an innocent budding romance between two best friends. Aired by tvN during the second half of the year, Answer Me 1997 starred Jung Eun-ji and Seo In-guk. Set in Busan, Answer Me 1997 was a drama centered around the lives of a high school friend group. Eun-ji played feisty, immature Sung Shi-won, the love interest of Yoon Yoon-jae, Seo In-guk’s serious childhood friend. The drama followed them through the ups and downs of high school life, including Yoon-jae’s heartbreak when Shi-won began dating his older brother and Shi-won’s obsession with H.O.T.. I think Answer Me 1997 struck a chord within all of us, whether it be Eun-ji’s convincing fangirliness or the confusing emotions we’ve had for a friend of the opposite sex, thanks to the impressive performances of Eun-ji and Seo In-guk. During the entire drama, I never felt for one second like they were acting, but it seemed more like they were just being themselves onscreen. No matter whether it was a result of lucky casting or hidden talent (or a combination of both), Eun-ji and Seo In-guk, rising idols in the K-pop-verse, made Answer Me 1997 one of the most memorable dramas of 2012. 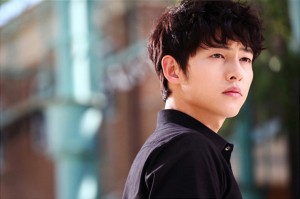 The strongest melodrama of the year, Nice Guy, aired its last episode only a few weeks ago. Even though I’m not the biggest fan of car wrecks, daddy issues, or amnesia (so basically the entire plot of the drama), I was quite impressed with baby-faced actor Song Joong-ki as Ma-ru, our hero with a dark side. Our poll for best actor showed that you guys did as well. As Amy mentioned in her article a little while back, Song Joong-ki fans have been waiting for his moment in the spotlight patiently for a while now. With so many actors his age, it was a little hard for him to get the recognition he deserved as a truly talented actor. With a pivotal role in Sungkyunkwan Scandal two years back and a solid performance in Tree with Deep Roots, Song Joong-ki has been rising to the top slowly but surely. 2012 was definitely his year with a lead role in this drama and the movie Wolf Boy as well. In Nice Guy, he channeled his bad boy side (surprising for his image) and pulled off all Ma-ru’s complex angst and heartbreak startlingly well. His acting kept the drama moving quickly at parts when you would expect it to really drag, and that helped pull Nice Guy to the top. 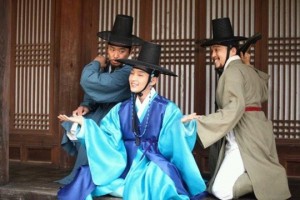 Honorable mentions this year go to Yoon Eun-hye in the ongoing melo I Miss You, Lee Jun-ki in Arang and the Magistrate, and Lee Jong-suk in School 2013. All three have exceeded expectations and helped bring their respective dramas to national recognition. Cheers to all the great actors and actresses who have made 2012 such a wonderful year of dramas and many more to come!