D-Unit, the rookie group under D-Business Entertainment, is back with their second MV since debut entitled “Luv Me.” The name of the song is pretty self-explanatory of the plot; Ujin, Ram, and Zin are out to get the guy to love them, no matter what. The group has met with backlash since their debut song “I’m Missin’ You” for being too much like 2NE1, as well as for their relation to T-ARA — but the group has continued ahead despite all of that, with the same members, and may be able to get past it with this comeback.

Everything about this MV screams guy group. You could easily replace the three members with boys and the concept, outfits, and dance would all work just as well. In the original information released about their comeback, the company stated that they were experimenting with using masculine clothing and tattoos for this MV, and they did not disappoint. All three of the girls are wearing long sleeved shirts under their outer layers that have a tattoo design on them, which makes the girls look like they inked up all the way down to their hands. The first time watching the video I actually thought the tattoos were painted on, as they sometimes do for MVs, which attests to what a properly styled item of clothing can do. The outfits overall are dark and androgynous with slashed tight black pants and loose fitting but stylish tops. There have been some complaints by netizens that the outfits are too black and some color would be better, but I disagree. Not only does black suit the feel of this song, and their previous release, but it looks good on them. 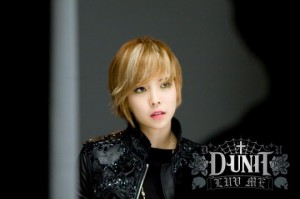 Their more masculine and dark image is what is unique about them. The wardrobe looks like it was pulled out of a male idol’s closet and there is neither a single skirt nor pair of high-heels in this entire MV. Ujin’s feathery shoulder wrap reminds me of the outfits in SHINee’s “Ring Ding Dong” MV and Ram wears a pair of pants with fluffy fur tails attached to it which is reminiscent of SHINee’s recent Japanese release “Dazzling Girl.” I guess we can assume that the closet they raided was, in fact, SHINee’s.

Probably the only thing about the styling I could have done without is Zin’s makeup and hair. The purple lines above her eyes are distracting – it looks like a second pair of eyebrows — and her lipstick color is way too pink for the rest of the wardrobe. Her hair is just too much, what with the angled cut, multiple colors, and being braided off to one side. Something slightly less asymmetrical, like being braided back on both sides, would have fit better visually. 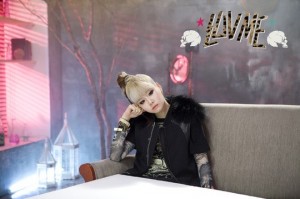 As for the story of the MV, judging by the lyrics, I am going with these girls are willing to do some crazy shit to get this guy to love them. The lyrics approximately translate as “I am standing in front of you again, I don’t care who is next to you, love me, you will love me” and “you will love me, you will only know me, even if things can’t be turned back now.” The lyrics certainly give off an obsessive and slightly crazy vibe. Interpreting the member’s actions in that light, Ujin is going to turn her guy into a vampire to force him to love her, Ram is going to create a toxic love potion, and Zin is simply going to use violence. But honestly, love makes you do crazy things, and there are times when emotions take control and block out logical thought.

That is what this song seems to be about, but the problem with the MV is that the story is half formed. We come into it in the middle, with the members already taking action to get the guy, and there isn’t any real conclusion as to whether or not they are successful in the end. There are also the odd shots of someone witnessing these actions on an antique TV, which didn’t make sense in any sort of story context. The story plot shots are well done and visually appealing, but also too scattered about and vague to add a cohesive story to the MV. 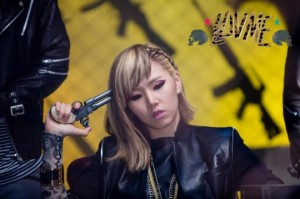 The dance shots and solo singing shots were a little heavy on the flashing lights. There always seemed to be some light source strobing in the background as I was trying to watch the girls dance. The most appealing dance shots were the ones filmed in what looked like a concrete parking garage – where the speed limit is 65 mph? The industrial setting fit the image of the MV and complimented the girl’s wardrobe and dancing without distracting from them. The shots with the hummer were, well, just too much. The Hummer is a huge use of visual space, and the headlights kept flashing, when the focus should have been on the members, not a car. Looking at a flashy car in the background is nothing new to K-pop, but no matter how often it happens, I’m never going to like it.

The dance itself was both feminine and masculine at the same time. The side sashay had a distinctly female sass to it, but the majority of the foot work and arm choreography was distinctly similar to guy group dancing. There was a good deal of cross-stepping, low to the ground hip-hop leg work, and hands held in fists, which are all choreography themes more associated with male dances. It is refreshing to see a girl group focusing on just dancing the choreography and not making it into anything cute or sexy. Arguably, they look sexy in their own way, but it isn’t because their dance moves make their butt and chest the focus. It would be great to see them with some even more complicated choreography, if they are going to stay with their androgynous image, to really put their lack of high-heels to good use. 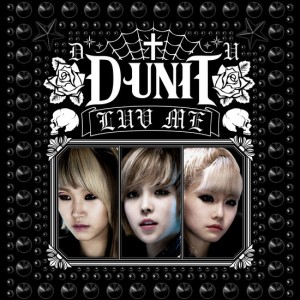 The song itself is catchy. All three of the girls have good voices and there is certainly some impressive belting in the song. The song isn’t as aggressive as may have been expected for the concept of the video, but it isn’t too much of contrast either. It would be interesting to see what D-Unit would sound like doing a faster song in the future since both “Luv Me” and “I’m Missin’ You” have both had a slower R&B feel. In conclusion, the MV is good, but not great. For me the wardrobe, visuals, and dance made the MV worth watching, but some of the sets and the story were definitely lacking.
Overall: 2.75/5

Are you liking this song more that their last effort, Seoulmates? And did I mention I have a huge girl-crush on Ujin now?