“Humanoids” is a new track on TVXQ’s repackaged album released on 26 November. The MV is simultaneously visually stimulating and utterly boring. The best part of the MV is undoubtedly Yunho and Changmin and their back-up dancers, which is great for TVXQ, but the rest of the video is underwhelming. The overall theme of the song is time, the future, and a humanoid utopia — basically, standard sci-fi fare. This concept meshes with the song’s sound and its MV’s sets, but the overall product feels undeniably choppy and disjointed upon watching. It seems like the producers were working on a bank of awesome ideas, but weren’t able to decide on one. The result is “Humanoids” being turned into a mishmash of everything without the depth each one of those ideas deserved.

The story line is… not really a story line at all. The dramatic scenes seem promising at first, with both members looking at their individual gear/clock pieces, but the climax plummets when they simply drop them to the ground. Zilch, nada. Following a build up like that, it’s almost as if we got cheated. Thereafter, it becomes apparent that the rest of the clip leaves you wondering, perhaps even questioning. Loose ends comes to be a running theme throughout the clip. No doubt, there was definite potential in the sci-fi plot, but it had little connection and direction. You’d think the lyrics would help resolve some of these curiosities, but no, yours truly couldn’t find a distinct story. In fact, it would’ve been better if they left out the drama sequences all together and let “Humanoids” be the dance MV it was meant to be. There’s nothing worse than half-doing a story, making the MV feel incomplete and then leaving viewers dissatisfied. 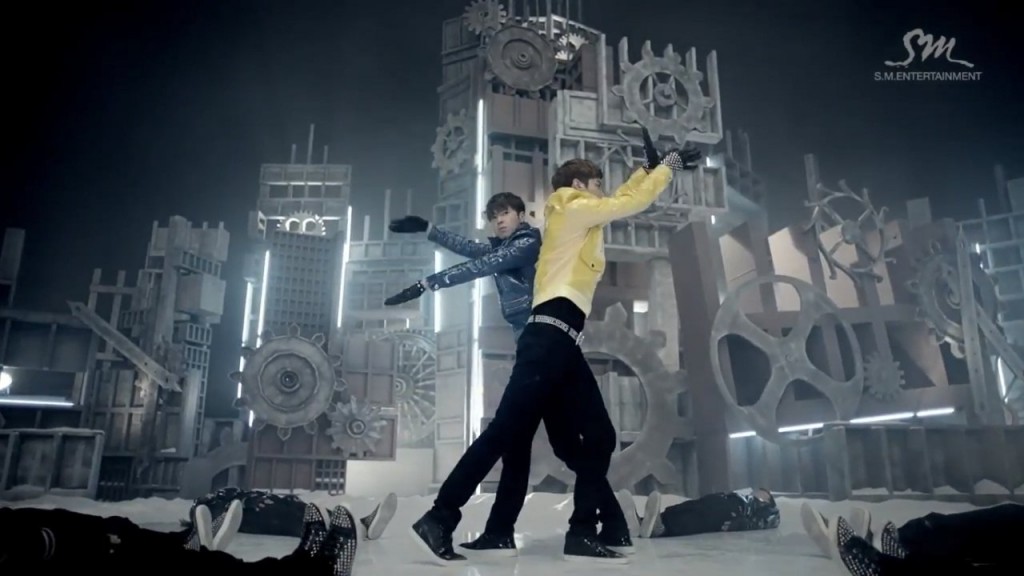 There are multiple rooms, outfits, and other physical elements that end up making the MV feel choppy. Among the solo shots in the light triangle, the solo shots in the light-colored jackets, the drama shots, and the two different dance sets, the MV weaves a rather overwhelming story. It doesn’t help that multiple sets had a strobe light somewhere in the background which made it even harder to focus on anything but the flashing. The sets are box rooms and green screen backgrounds, and since this has been the trend with SM Entertainment for a while I guess it would be too much to expect a change now. The gear tower was visually interesting, but similar to the background in Super Junior‘s “Sexy, Free and Single,” — it was obviously CGI. There was more CGI in this MV than I would’ve liked, but it was probably the only way to cost effectively make a giant tower with floating gears. The overdone background drew my attention away from Changmin and Yunho, instead of enhancing their presence, which is the opposite of what a set for an MV should do. 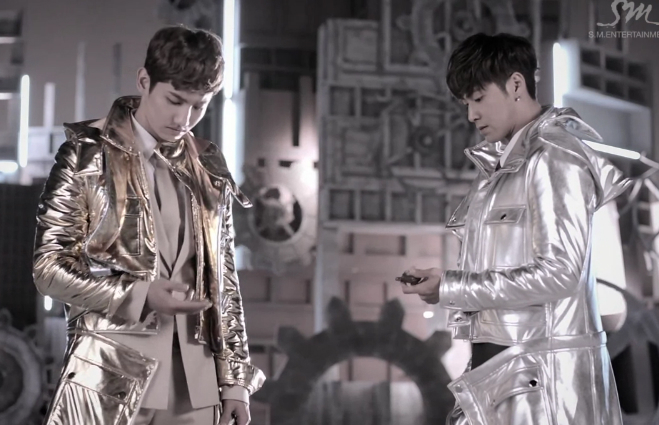 The outfits were less odd than their outfits for “Catch Me,” but they also fit less well in the MV. The stylist should have stuck with the theme of metallic and built off of the silver and gold jackets instead of switching to bright colors. The bright colors do make them stand out against the grey background, but shiny metallic would have done that as well. I could have tolerated the yellow and blue jackets, but the plastic pastel cardigans were particularly bad, throwing off the entire feel of the MV. The black suits in the triangle shots were classy and looked sexy on Yunho and Changmin, but they didn’t fit in with the MV. Nowhere else in the video are they dressed in formal wear, and suits simply aren’t futuristic. The saving grace was the simple tight black pants, which worked well for the dance and with all the tops. The tight pants, as opposed to harem pants for example, were excellent for the intricate leg work in the dances because it gave you a good view of every action. 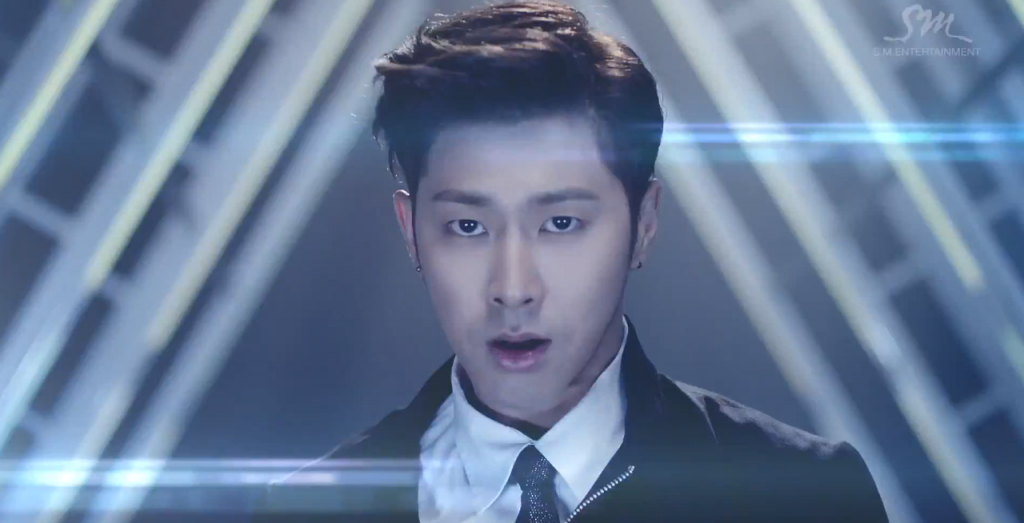 Despite all of my complaints, the dance was certainly a strong point in the MV. The formation of the group being a duo with many back-up dancers allows for unique choreography that is unlike other groups. Similar to “Catch Me,” the dance fit the futuristic and robotic theme of the MV with jerky movements and isolated arm choreography. The more complicated and contemporary choreography fits TVXQ better than simply cutesy choreography now that they’ve matured as people, and as a duo. The song was also enjoyable. With a combination of different beats, “Humanoids” has achieved an electronic, futuristic sound. Also, a nice thing to note is that dub-step effects, as per “Catch Me”, were avoided, and this will be a relief to many fans.

Despite the high production quality and flashy graphics, the MV still fell short for me. As mentioned in the beginning of this piece. the disconnection between sets and scenes, coupled with the hit-or-miss wardrobe choices, have only made this rendition of “Humanoids” quite incoherent. None of these complaints are TVXQ’s fault, as the dancing was spot on and the song was good, if a bit electronic for some listeners. Next time they come out with an MV, hopefully it will either be a drama MV or a dance MV, not a poorly done bit of both. Overall rating 2.5/5.