Idol group in need of a career boost? Willing to forego standard pop trends by reinventing older genres? If so, then Sweetune is the right composing duo for you! Continuing with our series on 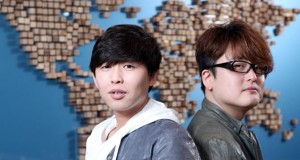 freelance and inhouse hitmakers, the spotlight is now on Sweetune, a tag team of composers by the names of Han Jae-ho and Kim Seung-soo. Sweetune got their start with DSP Media, composing for girl group KARA which helped to transform them into the force they are today in both the Korean and Japanese music markets. From then on, Sweetune has remained loyal to KARA and their sister group, Rainbow, but they have also managed to spread their composing around to other groups, sometimes with equally as successful or unsatisfactory results.

Just like Yoo Young-jin, it’s almost impossible not to recognize a Sweetune composition. The two men seem extremely nostalgic about the 80’s brand of synth pop. And similar to Yoo Young-jin and R&B, they’re a match made in composition heaven.

Sweetune got their start with composing KARA’s “Rock You” and it was around that time that the girl group was struggling to connect with the mainstream. Despite having debuted with the musically strong single, “Break It,”, the group headed towards a kink when they lost vocalist Han Sung-hee. With the addition of Jiyoung and Goo Hara, KARA underwent an overhaul of their image and transitioned into cutesy K-pop to coincide with the youth of their new members. Sweetune managed to maintain the essence of this cutesy concept with their music by coupling it with catchy synths that weren’t heavy on the ears. But “Rock You” was not as 80’s-inspired as much of the rest of Sweetune’s future work, but it does have a strong old school vibe to it. 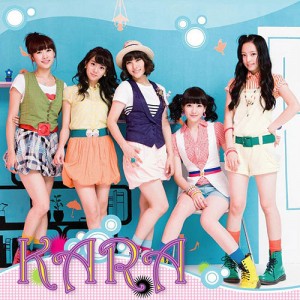 “Rock You” was KARA’s first hit on the selectively permeable wall of mainstream relevance, and Sweetune steadily helped them spit out more hits with “Honey” and “Pretty Girl,” until they unleashed the one song that finally destroyed the wall for KARA, “Mister.” Although “Honey” and “Pretty Girl” were inherently cutesy and distinguishable from the retro pop music that inspired them, “Mister” incorporated a lot of the traditional elements of an 80’s pop song — from old-school suspender pants to escalating beats reminscent of disco, borrowing more heavily from this era helped to perfect the sound that Sweetune was crafting for KARA.

The layering of music that has endured with Sweetune’s other compositions is evident in Mister with each layer of music building upon the other to reach a culmination that manages to make the song come full circle. With the success of “Mister,” the relationship between DSP Media and Sweetune tightened as it allowed for the company to gain another strong source of revenue in the form their now headlining girl group, KARA. Sweetune went on to become a dedicated composer for KARA, indirectly voicing this when they made their support vocal during the group’s near-break-up furor.

As Sweetune helped to follow up on KARA’s success with “Jumping” and “Step,” DSP would soon ask for Sweetune to help out their rookie group, Rainbow. Surprisingly though, with slight retuning on the pop sound front, Sweetune’s compositions for the younger group did not resonate as well with the mainstream. Altogether, Sweetune’s tunes have largely been cut from the came cloth, with the same synths-and-hooks formula as frame. In terms of Rainbow, they’ve had some strong melodies and one in particular is “Mach,” but no dice in drawing attention. It’s probably one of the reasons why Rainbow hasn’t been putting out much music. Despite the disappointment of Rainbow, Sweetune managed to make another group break into the mainstream the very same year, Infinite. I had always been able to see similarities between KARA and Infinite in terms of singing styles and so it didn’t come as much of a surprise when I find out that Sweetune composed for both groups.

Much of Infinite’s music, since their debut, has been very 80’s-esque. The added detail on their brand of pop is the infusion of electronica rather than disco. The first song Sweetune composed for Infinite was “Be Mine” and it had a very evident 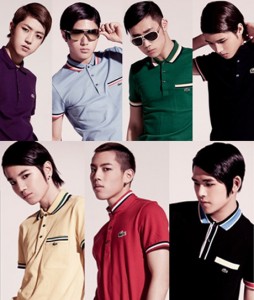 old-school electronica vibe, but more so Japanese 80’s electronica than its Western counterpart. The genre is what Sweetune primarily explores with Infinite, as seen in Infinite’s comeback this year with “The Chaser.” AS catchy and addictive as “Be Mine” came to sound, I was delighted with Sweetune’s change to the dark with “BTD” and “Paradise.” It separated Sweetune’s work from its electronica roots by adding orchestral and gothic elements to their music, which then supplied more emotion and atmosphere than either “Be Mine” or “The Chaser.” As it turns out, this is a genre that I would love for Sweetune to further explore. … perhaps for Infinite’s rumoured comeback in December then?

I’d also like for them to explore the lighter brand of electronica that came in the form of “Nothing’s Over” and “She’s Back.”  With Infinite’s success with “Be Mine,” “BTD” and “Paradise,” Sweetune has been able to clinch another group to be a dedicated composer for. The duo even composed Infinite’s latest song, an OST piece for L’s sitcom, What Is Mom.

Following their winning streak with boy group in 2011, Sweetune started off this year with Spica‘s “Russian Roulette” and Nine Muses‘ “Ticket.” These extremely catchy songs encompassed both sides of the 80’s genre that Sweetune has perfected, the dark and the catchy. These tunes went on to become (small-margin) popularity boosters, and of the two, “Ticket” has been rather enjoyable in that it’s helped to masquerade Nine Muses’ clear vocal hinderances. I’d say the song even highlighted some of their strengths. The best thing about Sweetune’s compositions is that they are incredibly catchy. At the same time however, the synths don’t drown but support the overlaying vocals. With Spica’s “Russian Roulette,” they managed to fit Spica’s soulful vocals by keeping the hooks at a minimum and letting them shine through. So far, with their follow-up songs for Infinite and KARA helping to solidify their statuses in the K-pop mainstream, 2012 has proven to be a good run for Sweetune. If there’d been one misstep, they’d have to call it on their collaboration with Boyfriend and “Love Style,” which benefited neither parties.

I definitely enjoy a lot of Sweetune’s compositions and wish that the two of them would get a lot more recognition for their music. Most of the information on the duo surround the idols they work for, which is unsurprising, but they don’t nearly get their dues as often as some other freelance hitmakers do. All of their music transcends a lot of K-pop and makes them an anomaly with the wonders they do infusing 80’s-inspired synth-pop into K-pop and avoiding auto-tune and simple hook-lines. Although Sweetune’s music is definitely better suited for groups with higher vocal ranges, with the exception of “Russian Roulette,” their music is refreshing within K-pop and I can’t wait to see the other works they come out with for KARA, Infinite or any other new group.

So, readers, what do you think of Sweetune’s music? Leave your comments of praise or displeasure down below!