Dal Shabet Remains Wacky and Relevant with “Have, Have Not” 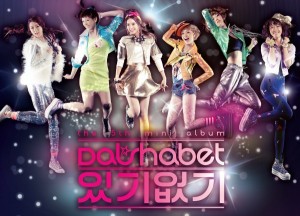 Out of the free for all Battle Royale–like blood bath that was the exponential spawning of rookie girl groups in 2011, Dal Shabet emerged arguably on top winning several rookie awards including the Golden Disk for “Best Newcomer Artist.” It turns out that the great girl group explosion was more of an implosion as many groups fought viciously to stay relevant with most failing to do so. Now almost two years since their debut, Dal Shabet is part of a small handful of girl groups to debut in 2011 to have actually generated enough staying power in the industry. How have they managed to do so? With a lot of prancing, puffing (of the cheeks), and pink.

Out of those who were birthed in the girl group inferno of last year and somehow managed to claw their way out, Dal Shabet, A Pink, and C-REAL have laid claim to the young, cute, and innocent niche for those uncle fans who feel that SNSD have gotten a bit too old and mature for their liking. Dal Shabet has stood out from the class of 2011 by being just a bit weirder and quirkier than the rest. Their formula for success relies on combining a simple yet flashy concept with a memorably catchy dance and standard auto-tuned electro-pop fair. The rationale behind the producers of the group, E-Tribe (also the producers of SNSD’s coming out party, “Gee”), is that if such a formula worked for SNSD, then it should work again. Unfortunately, the industry landscape has changed quite a bit since 2008. To their credit, Dal Shabet is still here, they’re somewhat relevant, and now they’ve finally ditched E-Tribe to hopefully explore a different image and musical style through “Have, Have Not.” Here’s to growth and progression!

Maybe, maybe not. Other than “Hit U,” their one and only comeback which attempted a mature concept, all of Dal Shabet’s releases to date have been on the cute and ditzy bubbly side. And considering their returning to form in their last release, “Mr. Bang Bang,” they certainly weren’t expected to turn the corner overnight. To be fair, the producer they hired for “Have, Have Not” isn’t quite accustomed to working with their overtly cutesy brand of music. Kim Do-hoon has created hit tracks for acts such as Beast, CNBlue,  G.NA, and Phantom while specializing in working with ballad artists the likes of IU, 2AM, Wheesung, and K.Will. He’s an industry renowned producer with a wide selection of successful hits in his production discography, but here he is asked to bring more complexity to a group whose image is centered on being glitzy, girly, and at times nutty. The end result is another product that is very similar to what we’ve seen before from these girls with perhaps slight growth in their image and music. 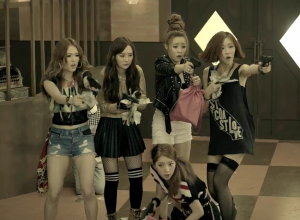 Conceptually, they are attempting to recreate the catchiness of T-ara’s “Roly Poly” with their own style of silliness which they established in “Mr. Bang Bang.” Given that Dal Shabet has already done disco, this second foray into funk is a welcomed return but it still can’t help but feel like a lackluster version of “Roly Poly.” Not that “Roly Poly” is the said all end all of the disco concept, but it’s hard not to draw comparisons when their cute posturing, high pitch registers, and arm-flailing dance moves are so tactfully similar. While not everything about the song and the concept may be highly original, Dal Shabet does incorporate its own playful sense of humor to make the MV and song stand out a bit more. Is this a sign of artistic growth? Maybe.

Where “Have, Have Not” differentiates itself and really comes to life is in its use of humor. There’s been comparisons drawn to Girl’s Day’s “Oh My God” but the comedy in “Have, Have Not” is a bit more refined and relies less on gag humor. The cheap gags come from the captions which stylize the MV as a comic book-like medium featuring extraterrestrial beings. Alien concepts have already been done (B.A.P and Glam), but each time the aliens are nothing more than the idols being themselves. The ladies of Dal Shabet actually give their alien characters some personality as they seem to be readily enjoying their mission of converting people into dancing fiends through their magical zappy fingers. While their personas are not a far cry from the gun-toting, dazed, and confused bank robbers they played in “Mr. Bang Bang,” at least they’re no longer wielding guns as a masculine contrast to their feminine aesthetics, as was also the case in “Hit U.” 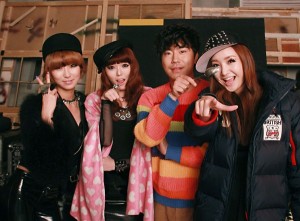 Adding to the wacky fun is actor Lee Si-eon, from Reply 1997, who plays the main abductee of the girls and is held in a prison cell (probably the same one the girls ended up  going to after the conclusion of “Mr. Bang Bang”). After he digs himself out of the prison Shawshank Redemption-style (with nothing more than a spoon) and finds the girls surrounded by reporters, he discovers that he has also been infected with the disease of dance and begins to break dance uncontrollably. Although shrouded by the MV’s comical tone, there are hints that the storyline is actually a symbolic representation of the South Korean government’s global political reach through its exportation of K-pop as a means of soft power. Maybe not.

As if the first MV wasn’t weird enough, they decide to get weirder by releasing a second MV filmed almost completely at, of all places, a livestock market. This is mind-boggling on several levels. First of all, let’s distinguish the reason for having two MVs in the first place. The song’s English title is “Have, Have Not” with the first video being called the “Have” version and the second one being the “Have Not” version. Secondly, the “Have Not” version is the electro swing remix of the song which is surprisingly less loud and electronically processed than the original. Thirdly, the title of the song and its subsequent labeling of these two versions make absolutely no sense whatsoever. A more proper translation of the Korean title through the lyrical context of the song is “Will you or will you not?” a dilemma related to one’s choice of action or inaction in a particular situation. In perhaps one of the only instances of allusion to a work of classical English literature, the rap verse ends with a very appropriate if out of place reference to the famous line from Shakespeare’s Hamlet – “To be or not to be [that is the question].” Surprisingly, that is a very accurate literary interpretation of the song’s main idea but it still doesn’t explain the highly inaccurate translation of the song’s English title and why the “Have Not” version is shot in such a shoddy location. The title may not be the only thing lost in translation in this second version of “Have, Have Not.” 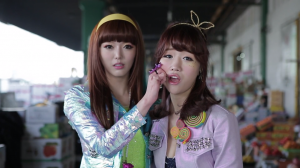 This second MV for “Have, Have Not” gives each individual member a chance to show off their quirky personality as they act like stoic, oddball creatures through their interactions with the workers, the props, and one another. In this oddly-mundane setting, the glitz of the girls is heavily contrasted by the grime of the market and its employees. Utilizing the factory warehouse and loading area as dance floors further contributes to the MV’s intended strangeness. As if that wasn’t strange enough, the girls’ names are introduced sporadically throughout the first part of the video along with a caption of the line in which they sing and, of all else, their age. Each of the three pieces of information are needless, but having their age displayed on screen feels most eerily strange. The lyric captions just seem out of place, especially since they are designated for random lines only. And isn’t this Dal Shabet’s sixth release already? If people didn’t care to know their names before, they’re definitely not going to bother remembering them now. To top the cherry on the cake, the MV features rap duo Jungtuk and the Cheerful Men who don’t add to the song musically, but are there only to add to the viewer’s bewilderment as they act as some sort of alien overlords who control the girls somehow with old school boom boxes.

Incorporating the “Have Not” version was probably not the best marketing strategy on the part of Happy Face Entertainment. To draw yet another comparison to “Roly Poly,” it seems possible that the “Have Not” version was intended to be their “Roly Poly in Copacabana,” but they decided to release it just a few days after the original version instead of including it on their repackage album. At the time of planning, as clever of a marketing scheme as it may have seemed to release two contrasting MVs almost simultaneously, the rather lethargic execution of it voided any benefits of doing such. The “Have Not” version is under-produced, it doesn’t quite fit the concept of the song, and it makes poor use of its guest stars, making it seem utterly unnecessary and redundant.

In the end, like in the beginning, Dal Shabet is trying desperately to solidify their hold on the industry with their developing form of cutesy, wacky humor and periodic hints of musical progression. They will continue releasing music at regular intervals because that is their their only hope of staying relevant. Other than updates of former leader Viki leaving the group, Jiyul being cast for small movie roles, and Ga-eun being really fast, there’s nothing really news-worthy that happens to the members of Dal Shabet which would put the group in the spotlight. In an effort to garner more publicity for their individual members to either earn them more appearances on variety shows or cameos on dramas, they’re utilizing their MVs to showcase the potential personalities these girls possess. Since their debut, they’ve been at the forefront of battling irrelevancy, and sadly, as far as they’ve gone, they’re still fighting an uphill battle.

If to be or not to be were the question in this case, I would much rather put poison in my ear. Have you or have you not a better opinion of Dal Shabet’s latest release? Will you or will you not give them a fighting chance?