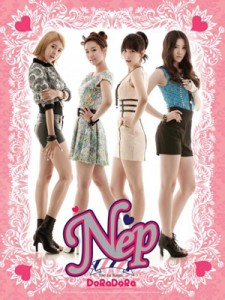 Another week, another set of debuts. While some might question the merit of covering new groups, especially given how most of
them fade away after a year from making little success, I always like to keep a lookout for diamonds in the rough.

This time around though, the rookie coverage is getting a twist. Given the immense competition in K-pop (and our love of comparing acts), what better way to access rookies than pitting them against, other rookies? Before talking about emulating or bettering the big boys, each of these subjects need to be equal to, or better than acts of the same level.

As such, we have here today, girl groups NEP and 84LY going up against each other (in the musical and entertainment sense).

NEP: NaEum Entertainment’s entrant into the crowded girl group field consists of four members. As usual with any debutant, 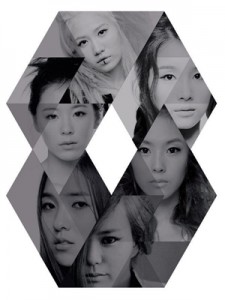 heavy name dropping ensues. The official video page lists the song as having been composed by the men behind a few of Secret’s hits such as “Madonna” and “Shy Boy”, while the dance portions are handled by IDMYO, who list JYJ as one of their many clients. The resulting work promises to showcase NEP’s talents, with “easy and addictive choreography… that will appeal to the public with its cuteness”. Expectations are in place there.

84LY: Consisting of six members, this group hails from Show M Entertainment. However, little is known about the song, due to there being no attaching MV.

NEP: A typical dance-set heavy, plot-free affair, the music video has a whiff of “low budget” to it. Commendably, the jump cuts were not in excess and at least helped to vary the visuals a bit, even if it was just from a light to dark background.

One particularly annoying aspect of the music video though, was that constant spot of white light shining in the background, or shooting in rooms with windows behind them. Not too sure what they were aiming for with that effect, but all it seemed to do was make the room look overly bright. As a result, the girls also look annoyingly washed-out.

84LY: No music video, as above, despite the group having an official YouTube page.

Winner: NEP, only because there wasn’t anything to compare with. 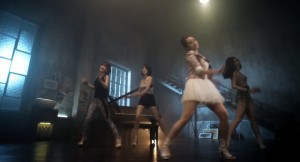 NEP: Nicholas expects… and NEP only partially delivers. “DoraDora”, was reasonably catchy, in that it managed to get stuck in my head, but there were some iffy parts to the song. It was hard to care for the constant buzzing that seemingly ruled the melody, as well as the chorus that only worked toward making the girls sound whiny.

On the other hand, while the belting at the end by Ji Su (the red haired girl) did seem obligatory, I did like how it was pulled off. Well, at least it proves someone in the group can sing.

84LY: “Girl’s Talk” comes across as a typical club anthem, with high emphasis on the beats. It came paired with insanely repetitive lyrics (Girls’ Secret Party Tonight) and vocals that appeared to be mixed into a cluster of unidentifiable unity of voices.

Towards the 2:30 mark though, the song takes an odd progression and slows down abruptly, proceeding into a dubstep/electronic hybrid break, before returning to its original pace at around 3:00. It escapes me how such a weird break could add to the song. I settled with the fact that it probably added an element of surprise, to break the monotony.

Winner: It’s a tie. “DoraDora” featured better vocals while “Girl Talk” made for fun listening, in the mindless but enjoyable dance tune sense. Both songs however do make mistakes common with rookie groups — annoying and delighting equally. At the end of the day though, the tunes are not much better than average.

NEP: With basic hand and leg movements, the choreography came off mediocre. Then again, it might have been a good decision, since nailing the simple things would give them a better start than running out of breath (literally and figuratively) amidst trying hard to impress. My impressions of the song were not any different after having seen both MV and performance. This was really just a competent live rendition, and nothing much else.

84LY: If an award could be given for “most ridiculous, yet interesting prop used in choreography”, it would have to be 84LY and the clutch bag in their hands. While it did make for interesting viewing and served as an interesting focal point, it shortly came across as pointless, especially from how it restricted their hand movements. If one hand was holding on to the clutch, there was only so much that could be done with the other. My attention was gradually diverted and eventually trained on the clutch (alone).

The rest of the performance was not much to write home about, apart from the music break mentioned earlier. Turns out that was an opportunity for a group dance break, as well as some rather annoying rapping.

Winner: 84LY, if for the really unique use of a clutch bag. But apart from that, NEP were slightly more assured on the stage.

Judging from their debut releases, both groups still have a long way to go before really worrying the big names in girl groups. In terms of song production, stage presence and recognisability, both still have a long way to go. I liked 84LY’s unique clutch bag choreography and dance friendly tune, but NEP has presented itself as the (slightly) better debut in this match up. I far preferred NEP’s approach of a more traditional pop song, as well as their attempts at getting the basics right.

That said, these two will be groups whose successes and/or failures hinge on their subsequent releases, given how average their debuts are.

So Seoulmates, what are your sentiments and which other comparison/s would you like to see in the future?