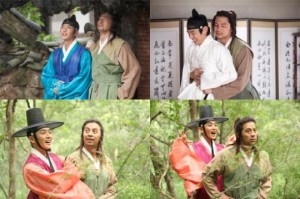 This last week brought us the final two episodes of Arang and the Magistrate and also one of the most satisfying endings I’ve seen from from a drama in a while. Though in the last episodes, I must admit the effects were getting a little corny. I had been getting a little worried since Episodes 11-14 had been dragging in comparison to other parts of the drama. But Episodes 15-16 certainly ramped the action up, a change that stayed until the end. To celebrate the end of a good run, I’m pointing out eight aspects of the drama that I liked and that also made the drama one of the better watches.

1. The Idea of Reincarnation and Cycles of Life

Part of what was so satisfying about the ending of the drama was a just resolution to the romance between Arang (Shin Min-ah) and Eun-oh (Lee Jun-ki). Sometimes dramas neglect an aspect that was previously crucial in the plot during the ending or some sudden fix that allows the plot to develop in the main couple’s favor arises. But neither of those occur here. The idea of reincarnating with full memories and repeatedly meeting one another in life cycles was previously brought up when discussing the history of the Grim Reaper Moo-young (Ha Jung-soo) and his sister Moo-yeon (Lim Ju-eun). As such, it seemed fitting that both protagonists receive a similar fate. And it didn’t hurt that the ending was more than adorable.

From the start, having a shaman that was book-smart but incapable of using her senses to make better use of her knowledge was an unexpected twist. Though she could hear, the lack of sight was a sore subject for Bang-wool (Hwang Bo-ra), and with good reason. If even the Magistrate can see ghosts, then what does that make a shaman? 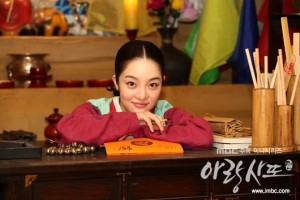 Apparently, it only takes blows from spirits to reactivate sense: the first being from a demon, the second from one of her own ancestors.

The relationship between Bang-wool and Dol-swe (Kwon Oh-jung) started off comedic and stayed that way until the end. Both are so drawn in by the other that they think about the other, make great efforts to see the other, and get entertainingly jealous over misunderstandings. The awkward ease at which their relationship progressed was in direct contrast to Eun-oh and Arang’s push and pull, markedly because of the lack of time constraints affecting decisions. But when the drama got heavy, these two characters, whether together or separately, were welcome releases of tension that kept the drama from plodding ahead to what seemed to be an unhappy ending.

This woman legitimately frightened me every time she opened her eyes just a little wider. We were first introduced to Kang Mun-yeong as Eun-oh’s mother, she who rejected his being due to laments over the past and visions of revenge in the future. Though clearly a bit too focused in revenge, she didn’t seem abnormal until her reappearance as possessed by Moo-yeon. From that moment on, every action seemed infused with haughty confidence and plenty of arrogance to last lifetimes–as it clearly did for Moo-yeon. But it wasn’t until the last episodes that I think Kang Mun-yeong’s acting shone most. It can’t have been easy to simulate souls battling within her body, throwing all of her energy into the motions to the point where veins were visible at her temples. And the difference between Mother and Moo-yeon was always clear to me, even when Eun-oh himself doubted whether his mother was actually present in the body. A part of this drama’s success, no doubt, it owed to Kang Mun-yeong’s great acting. 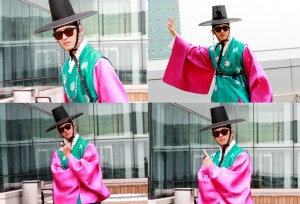 Continuing on with the acting, I don’t think we can forget Yeon Woo-jin as Choi Joo-wal. Naturally stony-faced throughout the majority of the drama, this actor kept a good poker face. He was constantly berated by Moo-yeon, Excellency Choi, and Eun-oh, was rejected by Arang, and honestly had very little to be happy about. This cold look also added to the early perception that he was simply a cold-blooded killer. But the knowledge that someone had loved him, died for him, and he had simply dropped her off of a cliff was more than enough to utterly break down the man.

It began early with the simple information that Lee Seo-rim actually liked him, loved him even. As memories returned with Moo-yeon’s weakening spirit, that stockpile of memories grew to include her dying for him, and his own merciless actions, all the sorrow from that recollection compounded by the fact that he had been attracted to her ghost. It’s a twisted cycle, one made even sadder by the fact that all Joo-wal had wanted was to be considered a human by others, to have a warm meal and a good place to sleep. These aspects developed him into a character very difficult to hate, primarily because of his good intentions, but also because he acted as a pawn for other for the most part. Joo-wal also played a good foil to Eun-oh, essentially gaining nothing in the end while Eun-oh gained practically all he wanted: the love from a mother, someone who loved and cared for him as a significant other, and respect from others.

5. Moo-young and Moo-yeon: Lovers to Siblings

This backstory didn’t hit until the later episodes. The idea that Moo-young and Moo-yeon had ever been lovers honestly came as a bit of a shock to me, most likely because the thought that they were siblings was so well-rooted that I didn’t expect anything else from the obvious affections. Their issues painted heaven as such a confining place, one devoid of desires, which was not the picture I had been expecting or the picture painted from previous episodes. But their story perhaps brought more questions that I think are unanswered. For example, how do souls end up as Grim Reapers or Celestial Fairies? Joo-wal made his way to being a Grim Reaper, so does that role involve having experienced some type of great sorrow? Overall, the connections between these two souls was necessary for the issue at had to cease trouble. I hope Moo-young enjoys life as a goat. 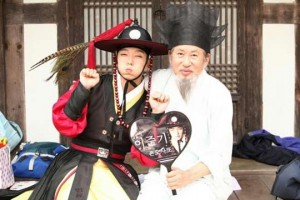 6. The Take-down of Excellency Choi

It was difficult to find someone more annoying than Moo-yeon, who thought it was okay to regularly kill innocent souls just so that she could remain human. And sit inside a house, not doing anything. How that makes any sense, I don’t think I’ll ever understand. But Excellency Choi probably overtook her as the character I would most like to soundly give a beatdown.

This man sold children as slaves, withheld food from the starving town, and used false accusations to get anywhere in power. And man did Kim Yong-geon play him fabulously. Every movement of that bearded mouth made me want to somehow slap him through the computer screen, most especially when he laughed. The manner in which he earnestly believed he was somehow superior to others oozed through his every pore and become more obnoxious than possible when feeding others lies. The tremors that ran through his body as Excellency Kim (Yun Ju-sang) read a royal command was satisfying, but not more so than the look on his face when he realized he was caught as Eun-oh found him attempting to get away with his gold collection. Because escape means nothing without gold. And we can’t forget Geo-deol (Kim Min-jae) reminding him that as ghosts, there’s no such thing as classes. Episodes 18 until the end wiped the smirk off of Excellency Choi’s face, and it was a long time coming.

A fight here and there always livens up a drama. And these were a plenty considering the job the Grim Reapers had to do and the fact that Arang gets into trouble all the time. I mentioned previously that Lee Jun-ki did his own stunts, and I continue to be impressed by that fact. However, one aspect about the fights that was minor but did disappoint was how Arang seemed to lose her fighting spunk near the end. It seemed that having pretty clothes and immortality dulled her fighting abilities to the point where she was easily within harm and caught in a daze each time. While I don’t expect her to spring out moves like Eun-oh or Moo-young against demons, her previous dirty tactics were nowhere to be found, which slightly weakened her character.

Initially, the Jade Emperor (Yoo Seung-ho) and the King of the Underworld (Park Joon-gyu) seemed to be benevolent Gods that played ba-dook every minute of the day, both wanting to keep the world in balance. 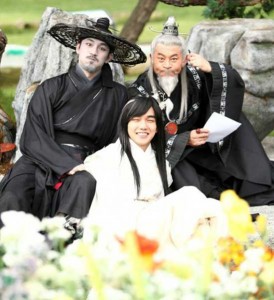 They even let Arang return to Earth to find out how she died. But as the series progressed, it became more and more obvious that these were really Gods, beings responsible for the life and death of many, entirely above humans in their eyes. Affection was unnecessary, ambition harmful, and no one was exempt from being used to accomplish their means.

And I appreciate this development. These Gods could have remained as stagnant characters, always all-knowing and predicting every move. But they couldn’t predict what would happen on the very basis that the cards they were using were human and thereby unpredictable. They found love to be a peculiar driving force and had some understanding of it, enough for the Jade Emperor to effectively use Eun-oh. But they were also very particular, to the point where granting Arang’s desire to find out the truth about her death while teasing the possibility of going to heaven was accompanied by Arang’s immortal body, which thereby prevented her from actually being able to fulfill her objective. It’s difficult to say how much of what they actually predicted came to be, but it’s probably certain that the Jade Emperor’s pretty pleased that he’s still in Yoo Seung-ho’s body.

While these are my favorite eight aspects from Arang and the Magistrate, there are certainly more out there. Seoulmates, feel free to leave your thoughts and add your own favorite parts of the drama in the comments!