Everyone knows Song Joong-ki, right? The actor has appeared in a variety of dramas and moves, most famously Sungkyunkwan Scandal and Deep Rooted Tree. In the drama Sunkyunkwan Scandal, Joong-ki played the part of Gu Yong-ha, a rich playboy, alongside JYJ’s Yoochun. It was a role that shot him to fame, making him a well-known name in Korea and internationally. Joong-ki continued to have success in his later drama, Deep Rooted Tree, another historical drama. Despite only appearing for four episodes, critics fell in love with Joong-ki’s performance. Joong-ki’s new project is Nice Guy, an upcoming drama wherein he plays the lead role, his first ever in a drama.  Korean magazine 1st Look featured Joong-ki on the cover in their latest issue in a spread entitled Not Boy, Not Man. 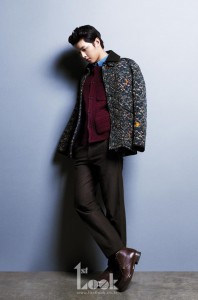 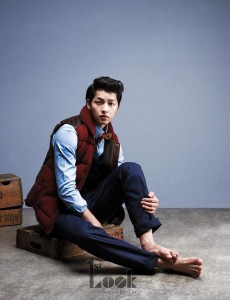 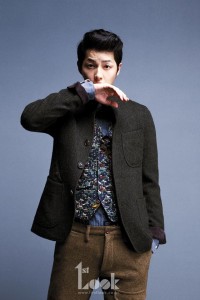 Joong-ki’s photo shoot for 1st Look involves a simple blue background, a grey floor, and a few creates for props. The cool atmosphere of the photo shoot puts the emphasis on Joong-ki and compliments his gentlemanly outfits. The lighting of the photo shoot takes advantage of shadows, using them for dramatic effect to make Joong-ki appear more mysterious and alluring. It’s a very clean, charming photo shoot, and Joong-ki looks amazing in all his photos, even his helmet hair not causing a problem. All dressed up in khaki, tweed, and cable-knit sweaters, Joong-ki emits a posh, masculine vibe, much like that of a young businessman. In his first photo, he wears a printed jacket worn over his shoulders like a cape, grey pants, and a wine-colored sweater. His pose is casual but strong, showing casual indifference. The jacket is a little ugly but he looks fine nonetheless. In the middle photo, Joong-ki sits with shoes off, on a wooden crate. Here he wears an outdoorsy, dark orange-colored vest. There are several woodsy themes in this photo shoot, the outfits mixing high-class styles with parkas and sturdy bags. The contrasting styles go together nicely and create a masculine image. Joong-ki’s bow-tied outfit looks cute with the puffy vest. The final picture features Joong-ki wearing a vest with the same print as his jacket in the first photo, brown pants, a chambray shirt, and a grey jacket. His pose is more coquettish in this photograph but confident all the same. 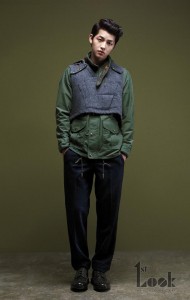 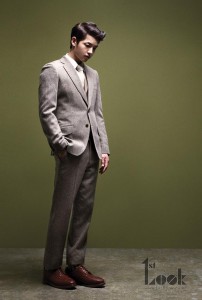 The background shifts to green for some pictures, giving the photos a slightly more earthy look. In the first photo, Joong-ki wears a green jacket with an odd grey crop-top over it, combined with dress pants. It’s an interesting outfit and not the photo shoot’s best but Joong-ki still looks handsome in his nonchalant pose. The next outfit is the most dressy of all, Joong-ki wearing a silver suit and brown brogues. The suit could’ve been fitted a little better and the pale grey doesn’t mix well with the cognac shoes. Joong-ki looks very sad in this photo and the shadowing only heightens the sense of melancholy. 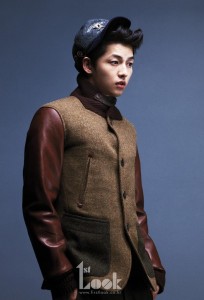 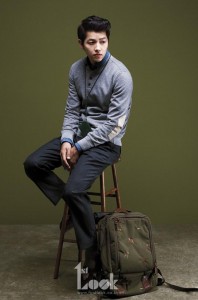 Not all of Joong-ki can be seen the in the nest photo. His face finally shows a tiny bit of emotion; in all the other photos, he bears basically the same expression. He also uses the one-hand-in-pocket trick in most of the photos, which works fine with the theme of the shoot but doesn’t show a lot of variety in Joong-ki’s modeling prowess. However, I do like his jacket and its use of different fabrics. The baseball cap makes the look surprisingly boyish compared to the concept used in the rest of the photos. In the final picture, Joong-ki slouches on a stool, a bag by his side. His outfit is more ordinary, with nothing very special about it.

Seoulmates, what do you think of Joong-ki’s 1st Look photo spread?  Did they successfully portray his “Not Boy, Not Man” persona?

For Your Viewing Pleasure: Descendants Of The Sun