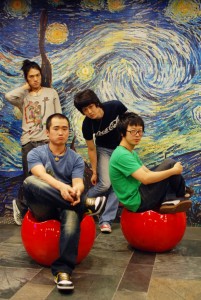 For this week’s Indie Gem we make a stop on the K-rock domain and throw a glance at Guckkasten. The band was formed, as many other rock bands, in Hongdae about nine years ago under the name of The C.O.M. and performed half of their career without making an album. The band consists of Ha Hyun-woo in charge of the vocals, guitar player Jeon Gyun-ho who sometimes lends his voice to their songs, Lee Jeong-gil the drummer who participates in the singing as well, and last but not least Kim Gi-bum the bassist of the group.

The band’s artistic signature could be summed up in the word ‘psychedelic’ and has become often attached to their hardly-describable sound. While their music has a solid rock base, opera influences play a key role (Ha Hyun-woo underwent opera training before) and recurring additions include some metal, latin sounds, crazy synths, a slightly jazzy feel and small doses of pop in the mix. The lyrics are self-penned and according to Hyun-woo, the name perfectly expresses their artistic creed:

Even though I’m just a band making music, the fact that I can express such psychedelic sounds from analog, basic sounds would be better articulated through this name.

Guckkasten stands for ‘zograscope’ (peep show in other translations), a device used to enhance the depth of the objects we perceive. By hinting at playing with light and perception, the band reminds its fans their lyrics are introspective while joggling with different images in a dream-like hyper-reality. Absorbed with the potent human mind and its rich imagery, both the music and message seem to put pieces of dreams and nightmares together with unexplained feelings and experiences.

Their first digital single was released in 2008, followed in 2009 by a full-length album and then a re-recorded version of the album, both self-titled. The album is representative for the group, with tracks like “Mirror,” or “Vitriol” incorporating a variety of sounds and a hazy, confusing and noisy late-night atmosphere. The themes vary as well: “Raflessia” hints at a parasitical leafless and stemless flower which grows isolated and has a corpse-like smell.  It’s used as a metaphor for the misery of fate and destructive sorrow. “Faust” speaks for itself, with the song talking about love, evil and death. 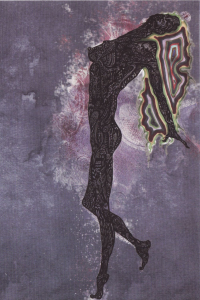 After receiving “The Best Rookie Award” after about seven years of activity, Guckkasten will come back with Tagtraume. According to the singer, the name comes from a term coined by Freud:

It means a disillusioned dream. You weren’t dreaming. You weren’t even asleep. But you see dream-like images right in front of your eyes. They say it’s a fundamental trait all prophets and all artists have.

Tagtraume means daydream and announces the inspiration Guckkasten already had from the surrealistic agenda. The album brings two new songs: “Red Field” is about human’s insatiable desire to have it all, from sinful pleasure to pure redemption. They inserted parts of Hitler’s speech in the song, using the nazi leader as a symbol: an uncompromising power-achiever that fell due to the ideology that got him there in the first place. 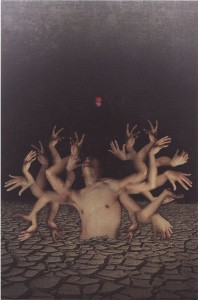 Next is “Manicure,” one of the most addictive tracks from them. Reflecting an apparently impure love story about his condition, the lyrics are minimal yet strong. The instrumental is powerful and multilayered, with a playful bridge followed by a compelling guitar and bass harmonization, with the drums being the final touch.

Last on the menu is Guckkasten’s “Montage.” Released earlier this year, it’s an angst-filled track about the meaning of suffering and matches Hyun-woo’s hypnotic voice perfectly. Listening to their tracks feels more like a journey: it takes sudden turns, unexpected brakes, walks smoothly for a while until you have a car crash. The same thing happens with “Montage:” it’s a roller-coaster ride on the verge of the same emotions. The video brings up secondary themes like the hazardous fate, alleviating pain or time.

Guckkasten is one of the most popular K-rock bands and they deserve their status. While their studio material is relatively limited in comparison with their years of activity, there are plenty of live recordings which showcase their talent. They don’t have a problem singing on large-scale stages and are confident enough to persist in doing music and leaving something behind. Do you have any recommendations from them? Are you at the first listen?