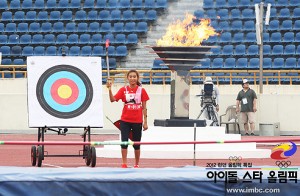 The Idol Star Athletic Championship is my favorite guilty pleasure of the season. Yes, it is random — what do idols have to do with sports, anyways? Yes, nothing –, pretty pointless and often even cringeworthy — can someone please tell them that’s not how you high-jump? I will even say it’s quite boring most of the time, especially those times when SHINee‘s Minho and ZE:A‘s Dongjun participate. However, I watch it religiously every time it comes out, sometimes even more than once and very often coming back and forth to replay my favorite parts.

This last edition marks the fifth one; MBC first broadcasted it on September 2010 as a Chuseok special and decided to make it a regular act after the success of the first edition. This time, and as a homage to the Olympic Games that will take place this summer in London, the program has been renamed as Idol Star Olympics and features fencing, table tennis and archery aside from the usual athletics. And that means more chances to see our favorite idols fail at new sports, yes.

And again, as I mentioned before, I will definitely watch it this year too. Because aside from the punctual second-hand embarrassment, there are still enough reasons that make it worth. Here are mine. 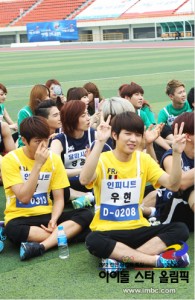 1. Idols in shorts. There’s not much to explain about this point, but if you’re not really into guys in shorts — or girls, but let’s be honest, we have seen them with shorter hot pants on stage — at least you can appreciate idols in tracksuit. Don’t they look like normal people, just for a change?

2. You can feed your inner fangirl or fanboy out of it for weeks. From the announcement to the fancams and pictures from the recording day until the episode actually airs and gets subtitled, you basically have spazzing material for at least one month.

3. It gives spotlight to usually underexposed idols. Because the Idol Star Athletic Championship is not about singing, dancing, being funny or being good-looking, idols who usually get overlooked get a chance to shine. In the last edition, for example, Dal Shabet’s Ga-eun and Nine Muses’ Eun-ji won medals, a short but gratifying moment of glory. And others, such as Sistar‘s Bora and ZE:A’s Dongjun have found a niche as ‘athletic idols’. Even if you don’t have a talent for sports either, you can still manage to garner some attention, maybe falling graciously or jumping in a “special” way — “special” is actually an euphemism, yes . It also works as a de-typecasting method — who would expect Jo Kwon, known by his antics and girl groups dances, to be a pro speed racer?

4. That stupid but gratifying feeling when your bias is faster than others… or clumsier. Some find it endearing when their favorite idols are good at sports. I’m more from the group that likes their idols to be totally uncoordinated people, it makes me feel we may be meant to be after all.

5. You don’t even need to wait for the subtitles. Getting the MCs jokes is nice, but if you don’t feel like waiting for the fansubs you can just skip their parts and enjoy the show.

6. Idols falling sometimes is just…funny. If no one gets hurt, of course. Just healthy and second-hand embarrassingly fun. How do they actually manage to look so perfectly styled even while tripping, anyways?

7. It provides fans with stupid amounts of fanservice. What are the Idol Star Athletic Championship if not a huge ode to fanservice? Starting from the fancams taken back when the program was recorded, with loads of heart-throwing, gratuitous skinship, silly dances, aegyo, etc., etc. to the broadcast itself that, just like any sports championship, encourages competitiveness — but instead of cheering for your country, you cheer for your fandom. Not that it incites fanwars, but fans sometimes need to feel their favorite group is better than the others, even if it’s in sports. 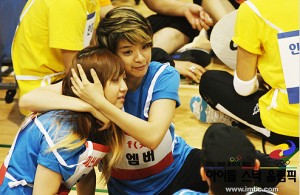 8. Fandoms colliding. We all love some brotherly or sisterly love once in a while, and while there are plenty of occasions to watch band members interact (their own variety shows, to start with), there aren’t that many chances to actually see members from different groups be friendly on air.

9. It’s sports, after all. Anybody who enjoys watching athletic championships would also enjoy the Idol Star Olympics. Idols are obviously slower and awkward, but they can also be extremely competitive. Creepingly competitive, sometimes.

10. It’s just epic — or that’s what the editors manage to make it look like through the teasers. Who wouldn’t want to watch it with this TV commercial? Just listen to those violins and chants, doesn’t it look like it’s gonna be mind-blowing?

So which are your thoughts on the Idol Star Athletic Championship, Seoulmates? Would you be watching it too or would you rather pass? If so, which are your reasons? Leave your comments below!