"Sexy, Free & Single": Good Video, But as Always, Can Be Better

With a “new” sound in this title track — ok, ok, not totally new, but at least it’s not “Sorry Sorry v.4” — Super Junior has come back with Sexy, Free & Single, their 6th studio album. You can check out Jasper’s album review here, but now let’s see if their musical improvement had somehow its reflection in the MV of their title track, also called “Sexy, Free & Single.”

When the teaser came out, I was highly impressed with the reddish colors and had great expectations from this MV. Eventually, the scene turned out to be only one of the three dancing cuts in the MV. The MV basically consists of three sets with the boys dancing in three respective outfits, plus two different solo shots, one with the boys in suits and the other one with SMBD inspired outfits (c’mon, I can’t be the only one who thought that!). Aside from that scene, which is somehow original for the set as well as the colors, the rest are pretty much typical — grayish color palette, white light. So there’s actually a big disruption in the formal aspects of the MV and the reddish shots just seem totally unrelated. 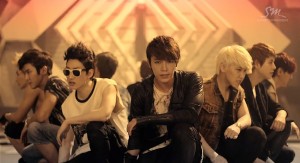 I also feel that the first set is definitely underused — used to your typical Super Junior white box, it looks fantastic. But here it works just as one set more, and it’s a pity since it’s such a complex place — it even has a crosswalk, they could have filmed a semi-drama version just there.

We can find the same lack of connection between the different outfits too: we have the casual look, the rocker look, the suits, the white pants, the semi-naked look… According to the topic of the song, the first one (the one in the reddish shots) is the one that fits the most: it’s youthful, casual, party-esque. The rest of the looks seem out of place, especially when all thrown together. I’m still giving a chance to the white outfits and even the rocker ones because, although totally unrelated, they look good on them. I’m usually a fan of suits, but they could have disregarded them here perfectly.

Aside from an excuse to show Siwon and Leeteuk half-naked, the last look is totally out of place. But because Siwon and Leeteuk are half-naked, it’s probable its sole propose is to attract attention and add a bizarre note – really SM, stop doing that. Besides, if you want to grab our attention next time, try putting Kyuhyun half-naked — that would be new (and something I wouldn’t mind seeing).

The “Sexy, Free & Single” choreography looks really good — not as complex as “It’s You” and not as memorable as “Sorry Sorry,” but definitely better than the last ones from Super Junior. They may not be the best dancers out there, but they are good enough to make choreographies that make the most of having ten members — I don’t want to turn this into an “It’s You” exaltation, but really, how fantastic is it when they use the members to their full potential? If there’s something I’m missing, though, it is the lack of some sort of characteristic step. In this way, the choreography is quite similar to Super Junior-M’s “Perfection” – fairly complex, but yet a bit plain overall. 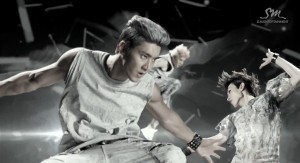 Aside from that, I’m really digging all the steps in which they have to form a circle, the twist and jump from minute 1:50 and oh well, basically any dance step that involves the members executing different movements at the same time. It looks refreshing. And finally Eunhyuk‘s dance solo is integrated well into the song, and manages not to be overly gratuitous or awkward.

But now to the important point: what the hell is going on with those Matrix-like shots? Not only are they unnecessary, but also incredibly cheap. They are reminiscent of the video effects in “A-Cha” — and they looked awkward even back then. Yet again more proof that “Sexy, Free & Single” is basically a ragbag of outfits, sets and camera effects.

Is there any X-Factor in this MV? Honestly, not — we have seen Super Junior doing the similar things way too many times. If anything, I was eagerly waiting for Kangin‘s appearance and then it turns out he basically only shows up during the 5 seconds his line lasts. Really, SM, really? Have we been waiting three years for this? For some reason it looks like SM is trying to conceal Kangin’s comeback instead of using it as a marketing strategy — I’m not really sure why yet.

Dance MVs, as my colleague Antonia pointed out, can work really well when properly done — “Sexy, Free & Single,” however, is not really a polished MV. There’s no visual or conceptual continuity and the postproduction effects are just cheap. And when you have been doing the same MV for four albums… well, it may get repetitive. So although the title track has managed to receive some positive responses thanks to breaking the “Sorry Sorry” jinx that has been following them for years, I haven’t really heard any (positive) reactions towards the MV. Conclusion: underwhelming. And the worst part is, nobody seems to be surprised.

What do you think about “Sexy, Free & Single” MV, Seoulmates? Were you expecting something different or was your reaction pretty much like mine?