Kim: So, I’d like to start by taking back something I said on day one of Music Matters – this year’s acts weren’t a letdown. I attended more gigs in 2011 – more as in a selection of bands as well as nationalities – but they definitely upped their game in the Korean department of things. “Jungle Fam!”, as Maryse has been chanting since we saw them… Hahaha

Mar, would you like to briefly introduce the whole concept behind Digital/Music Matters?

Maryse: Digital Matters / Music Matters is a yearly conference where several industry experts come together for seminars and talks. They also invite some of the biggest acts – Jason Mraz and Simple Plan in recent years – but they also favour lesser-known artists as the purpose of this event is to spotlight new talent. We’ve actually seen a number of Korean Indie acts participating in this annual affair; with the Korean Wave making its mark globally, this year’s Music Matters encompassed a majority of K-pop acts – more of K-hop in fact, with Jungle Family singers headlining the event.

Alright, enough of this boring introduction. Let’s talk about what went down!

To lay it all out, the line-up consisted of Tiger JK, Tasha, Bizzy, Clazzi, Yi Sung-yol, M.I.B, BTOB, Jinsil, MYK, J’Kyun and Rhythm King. Personally, since hearing about their LA concert, I’ve been dying to see Jungle Family in action. Their inclusion at Music Matters came as such a surprise, but left me scratching my head as to why Leessang was left out (boo-hoo). To be honest, breathing the same air as Tiger JK and Tasha got me in jitters throughout the entire press conference. You cannot imagine the knot in my throat as it came to my turn to relate my questions. But it was all good! It was an extreme delight to have been able to meet them and get some answers, so here goes a short transcript of what we got:

To Clazzi – Coming from one of the most unique labels with a large pool of talented and creative artists, who in the label would you consider a competitor and why?

Clazzi: There’s no one, but if I had to choose, it’d be Yi Sung Yol. He’s not really a rival, but more of someone I look up to and draw inspiration from.

To MIB – You’ve been given quite the head-start in Jungle Entertainment having Tiger JK and Tasha as your mentors. How is your relationship like with them, and what is one thing that you have learnt that has influenced you the most in your life and your music?

5ZIC: To us, Tiger JK, Yoon Mirae and Bizzy are all our mentors, and they have never specifically instructed or ordered us to do things, but they encourage us to do the music we like. So if we have any questions, we just approach them. But it is a little (turns and looks at Tiger JK & Tasha), just a little, pressurising because they’re such famous seniors and amazing, and we’ve all seen them on television from a young age.

MC: Is that true?

Tiger JK: (jokingly) I told him to say that.

To Tasha – You completed a rather successful collaborative project with The Creators Project last year. How does that pre-empt your appearance at Music Matters as well as the event’s specially designated hip-hop showcase? 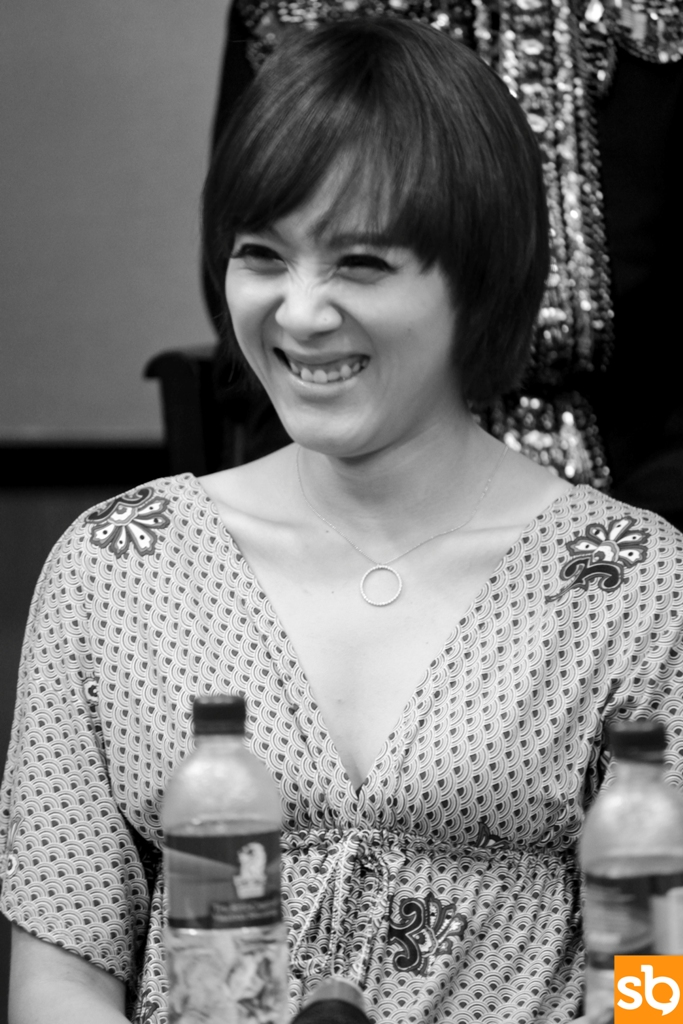 Tasha: The Creators Project collab actually had a lot to do with JK. He was the one who put that all together. I felt really honoured to have the opportunity to work with them. To be honest, I didn’t know much about this global network. JK met up with the appropriate people and arranged it all. Eventually, I found out that they’ve been responsible for giving a myriad of artists a lot of airplay and promotions, regardless of geographical location. They go around the world doing this without expecting anything in return and this is all done in the spirit of loving Music and Art. Especially with Music, it’s universal as a genre and people can feel it. That’s the same mindset I came with for tomorrow’s show. I really don’t know that much about Music Matters, but like I said I’m hoping that regardless of what language we’re singing in, people will feel it and people will know that there are different types of genres. I know K-pop is really huge right now, but I’d like people to know that there’s hip-hop too.

With that, Thursday felt like a very long wait and had me looking forward to all their performances.

Kim: And that was the first taste we got of the stars for the few days that they were here. It was a particularly small room for a press conference and everyone had to huddle together but none of it was for naught. I was so happy to know that contrary to previous clips I’d seen of Tiger JK on Korean TV, he was really at ease for the entire duration. What with Justin Bieber jokes (we brushed it off as one) and M.I.B being an absolutely “horrible name” (as per JK’s flat-out comment)… Tasha was such a sweetheart too. The M.I.B boys were a lull though, they need to smile more – I can already see Mar throwing a Kangnam-can-keep-his-aloofness-infused frown at me… As with freshie boybands, BTOB was super receptive. But someone needs to tell these entertainment agencies that Chilli Crabisn’t representative of Singaporean cuisine… seriously, boring, next! Bizzy and Clazzi were the quiet, charismatic ones – I didn’t know what I was in for till a day later later.

Maryse: Yeah, Tiger JK actually talked about working with Justin Bieber but not a single soul in the room thought he was for real. It might’ve been his off-the-cuff way of putting it but “BAM!”, a month later, Far East Movement releases said Justin Bieber, Tiger JK and Tasha collab. And just like that, I was taught to take him seriously. Sorry, JK! And yeah, I do agree that MIB needed to smile more, but Kangnam looked awesome like that! <3

Anyway, performance day was the following day, with “K-pop Night” held at the fountain square in Clarke Quay. I was there a good few hours early to save a good camera spot (which proved useless, we’ll come to that later) and was lucky enough to catch some of them rehearsing. [Kim: OK, oncoming fangirl moment…] Amongst the shots I got, I had this really awesome one of Kangnam looking into my camera (or so I’d like to assume). For this, my comrades have told me I’m weird. Oh, whatever! 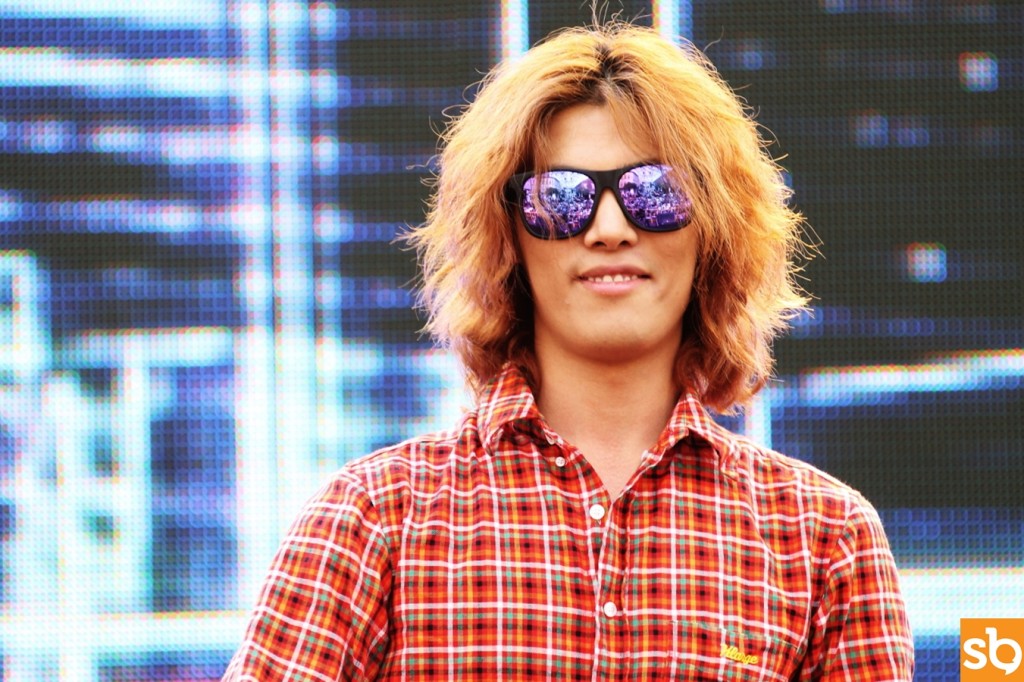 Not doing it for you? I think he’s incredibly beautiful; perfect. [Kim: Earth to Mar, earth to Mar.] Thusly, we had our sneak preview of what was to come that night. Rehearsals with Tiger JK, Tasha and Bizzy were enough to get early fans pumped up before the actual show.

Kim: To go a little into the narrative bit of things… Music Matters fell right into the heat of Summer. Singapore’s warm all year round but 2012’s mid-year humidity has been crazy. I guess you could say the evening got hotter by the hour. Fortunately, as I saw no point in dressing up for the gig – just blouse and shorts – I think I was in the right attire to mosh with the night’s 300-strong crowd. There were A-LOT of people. MM event organisers sure got K-pop Night well-publicised. Pretty sure all of us could’ve filled a small Uijeong-bu neighbourhood. T-minus 10 minutes to the first performance and it was already a thronging sauna of K-poppers and hip-hoppers. We were seeing the infamous fan-boards, the mortal enemies to our cameras. These were more for BTOB though. Arrangements, we were told, were to be three recordable songs for each artist, which meant that we would be ushered in and out of a narrow length of space at the edge of the stage. How that was gonna work out, we weren’t sure.

Maryse: I did think there were more fans for BTOB too. No lie, I thought they’d scoot off after the boys were done. But that atmosphere was way too infectious; judging by the increasingly sticky pushing and shoving, I’m pretty sure everyone stayed till the end.

Prior to K-pop Night, I’d only been looking forward to seeing Clazzi, Tiger JK, Tasha and M.I.B in person. But K-pop Night surprised me with Clazzi’s collaboration with Yi Sung Yol, Jinsil and MYK. That one left a HUGE impression on me. Cheesily put, it was simply amazing. I’d never come across such an aesthetically beautiful musical combination before, I was completely in awe with the musical genius that Clazzi was, and still is. 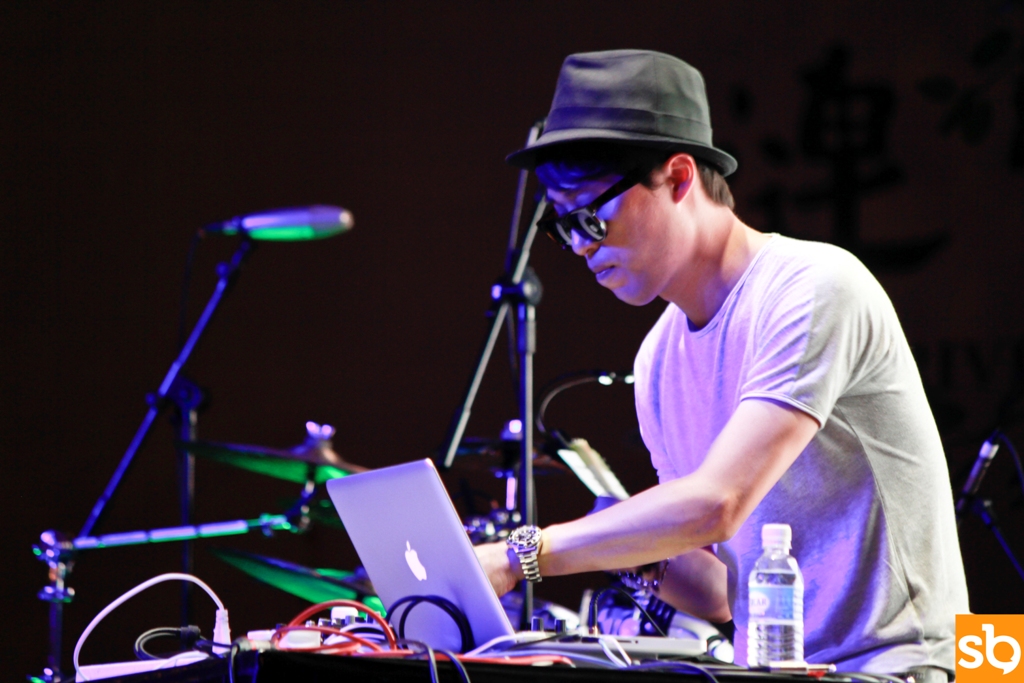 Then came the highlight of the night. Jungle Family totally tore the house down! The ambience was screaming “screw the heat and party!”; even Leessang’s non-attendance was forgotten thanks to the mind-blowing performances that Jungle Fam put up. M.I.B started the set and Kangnam’s pretty locks nearly distracted me from my videography duties… [Kim: *mimes Mar giggling*] On the whole, despite being given a measly two-song-set, the boys put on a really good performance. Bizzy, one of K-hop’s most underrated artists, came on next. I have to admit that I didn’t get around to checking out his music prior to the event, but his performance had everyone on their feet. Huge consolation, I was absolutely hooked to “Bam” for days after! 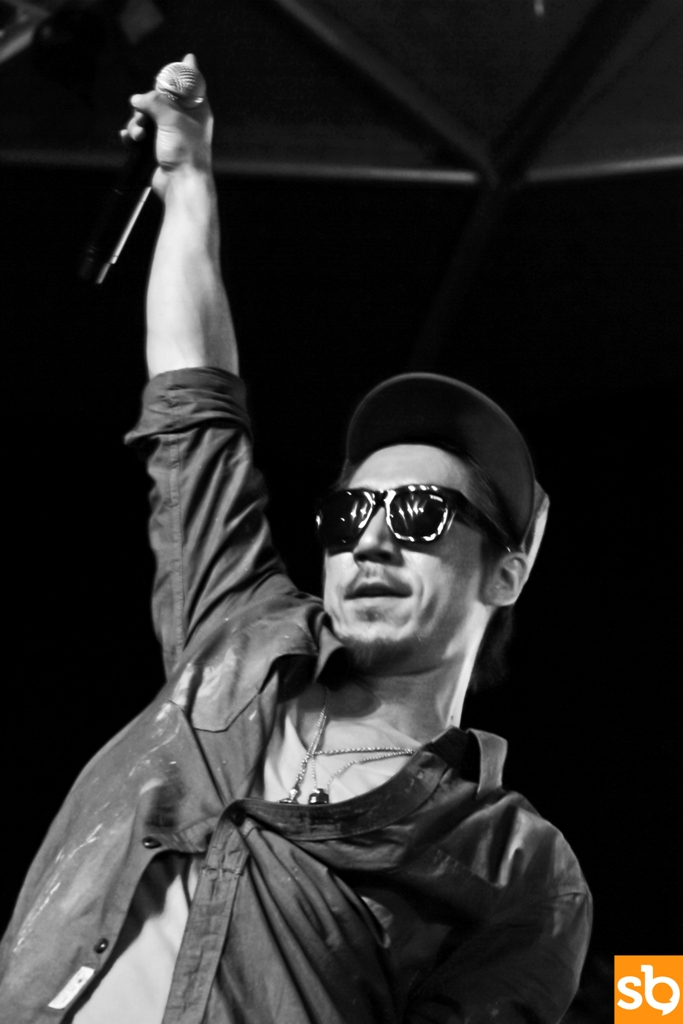 That said, nothing was able to trump the greatness that was witnessing the legends of K-hop, Tiger JK and Tasha. I was totally, mentally, flailing around throughout the whole thing. If there was one bad thing to say, it would be the regulations that put on us journos – we were kept out of the pit for the craziest segment and grand finale. On the bright side, we captured a good number of songs with the other artists. All in all, getting to watch these legends perform was an incredible dream. The couple even gave an honourable mention to the nation’s MC, Yoo Jae-suk, by performing their collaboration track, “Let’s Dance”, from Infinity Challenge. By then, mental flailing had turned into physical flailing.

Excusing the choking heat and humidity, that night with Jungle Family has definitely been my best Korean concert/showcase experience thus far. They gave their 200%, and it was well worth the time and effort – keeping in mind that it was a free concert – and an occasion I’ll never forget.

Kim: You’ve practically covered it all, haha. But let me just add my two cents.

BTOB didn’t let Cube Entertainment down. There’s hope yet for another sustainable group in the realm of newbie bands. 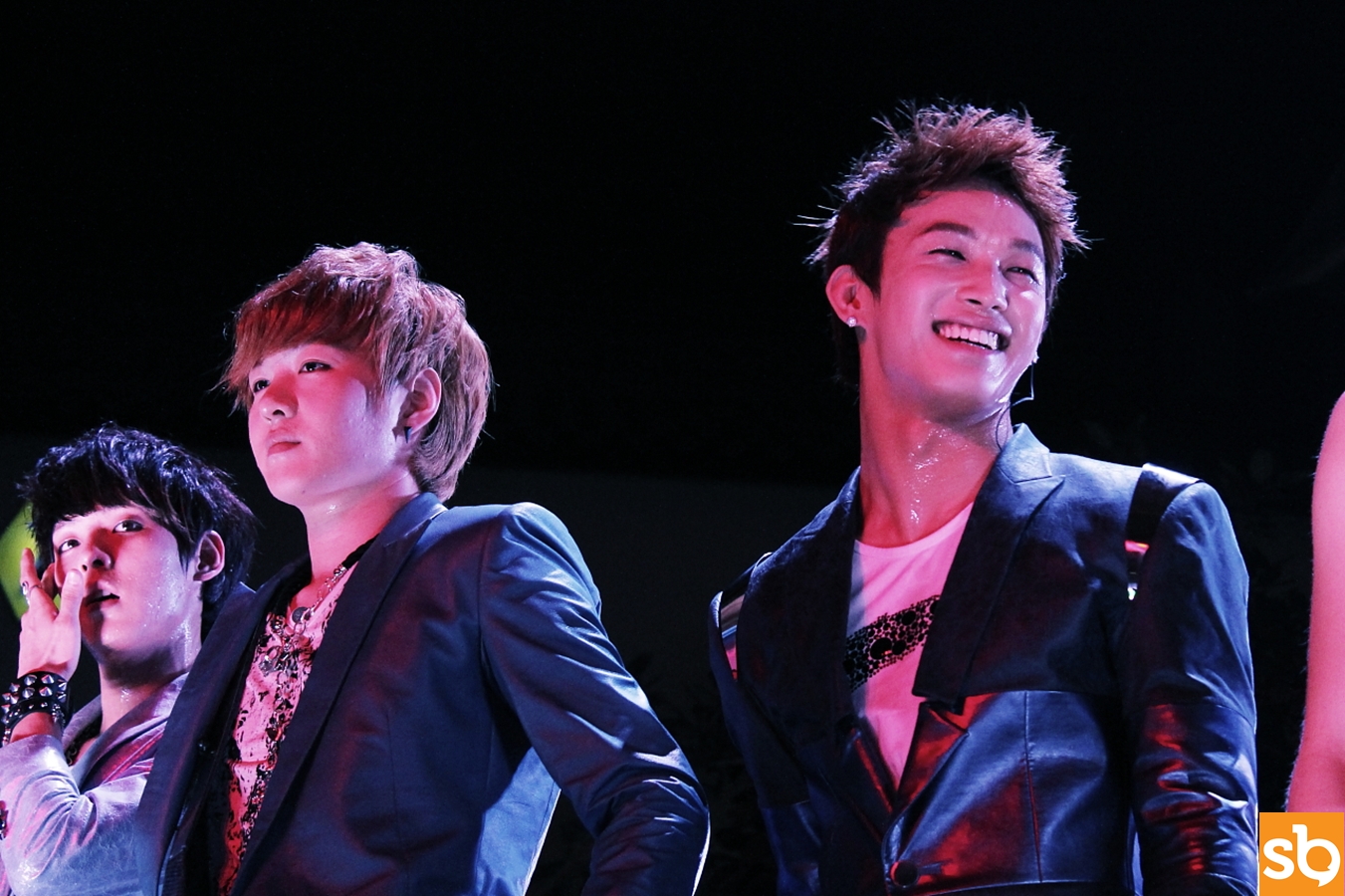 Had to step back a little during the Clazzi, Yi Sung Yol, Jinsil and MYK collab but I could hear that familiar trill from one of my favourite Kim Sam Soon insert songs. It was almost like my journey with K-drama had come full circle – KSS was the first series I ever laid my eyes on! And I’d heard these artists individually but to hear them together was just lush (though I still don’t quite fancy Jinsil’s voice).

Evidently, the high points of the night were the Jungle fam performances. I confess to knowing a bare minimum of songs but I definitely recognised all the big hits. If only JK and T performed a longer cut of “True Romance”.

Like Mar’s said, this will last me a long time, in terms of calibre and performance from a live Korean event. There’s just something in that Jungle fam session that I haven’t been able to find in K-pop stages. Till the next time they come – full-scale Jungle Ent concert, please!

Check out our video highlights from Music Matters 2012!