Super Junior Welcomes You to the "Opera" 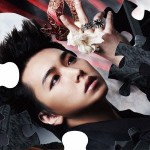 Super Junior released the short version of the music video for their third Japanese single, “Opera,” earlier this month. I’m not sure why it was released two and a half weeks before the single is set to hit Japan, but boy was I pleased. I had liked this song much more than their title song, “Mr. Simple,” from their fifth Korean album, and through fancams from numerous fans, I had liked the dance more as well.

Unlike “Mr. Simple”‘s fairly chaotic sound accompanied by numerous fast-paced dance moves, “Opera” is more about the drama behind the moves and displays a more matured Super Junior. Although numerous comments tell their Japanese, aside from Sungmin‘s, is nothing to be proud of, I’m glad this song got an opportunity to shine.

Like most Super Junior MVs, this one is mostly a dance performance with individual cuts of the members. The theme is heavily based on “Phantom of the Opera,” which is clear from the song lyrics and the masks present in the MV. If you haven’t already, take a look at the MV below:

There is great cause for celebration: Super Junior has moved out of the oddly lit gray-white rooms into a dark, Venetian-style interior for this MV. It’s more traditional than the set of Super Junior-M‘s “Perfection” music video, yet not as modern as SHINee‘s “Sherlock” set. There are still similarities, but that is to be expected from SM Entertainment. I’m just glad that they aren’t closed in their bizarre rooms and that I haven’t already seen this exact set before. The color palette is kept to dark variations of colors, with the only light coming in through the windows and from the chandeliers. The first dance set sticks to shades of brown, giving an elegant and neutral look to the surroundings. The second dance set is a muted gray-blue that serves to create a mysterious and abandoned atmosphere to the set. To match that, the members stick to clothes of a gray scale, mainly black.

And can I just say that I’m pleased that there aren’t flashing lights in this video? “Sorry, Sorry,” “Bonamana,” “Mr. Simple,” “A-Cha,” and “Perfection” all had these rolling lights behind the members, but they are absent in this MV. I call that progress. 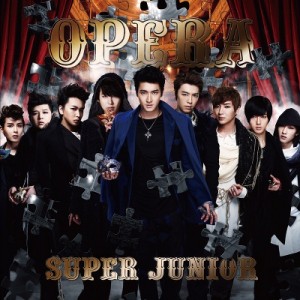 The quality of the music video is high, dare I say one of the best ones Super Junior has had yet? There isn’t a storyline to the music video, but Super Junior rarely has one. What does correlate well are the outfits and the props used. The Venetian opera masks they have cover the eyes and part of the nose, and they are all beautiful, and go well with the concept of a Venetian opera house filled with stylish and elegant members of society. Similarly, all the members look fantastic. The clothes with capes fit the theme well, and they all look otherworldly with their good looks. Whoever was in charge of their make-up did well. (Except for Eunhyuk‘s drawn-on tears. What was that?) While they don’t look innocent or too young, they still look good for their age, especially Leeteuk. Does that man know where the Fountain of Youth is?

Luckily, SM left behind their frequently-used 360-degree camera (see “Perfection”, SHINee’s “Lucifer,” SNSD‘s “The Boys,” just to name a few) and their swinging camera that gave many a viewer headaches from the bobbing back and forth. The camera work was simple but well-done, focusing the on the group as a whole, individual members, and particular dance steps. I appreciated it, especially after “A-Cha”‘s numerous versions that were completely unnecessary. Special effects were kept to a minimum, only rarely doing slow-mos of dance moves. As this was a short version, the MV was cut off at the end. I’m curious as to what they’ll do about Heechul‘s part in this song, or if it’s been given to another member. Super Show 4 performances had Eunhyuk doing the part, and I wonder if that will carry over to the MV.

Now, are these men (I don’t think they qualify as boys any longer) some sort of supernatural being? They seem to have magical powers, from lighting candles to materializing out of thin air a la Kai from EXO-K, except with a white-gray smoke. It seems that having powers is another way of demonstrating the control that the members have, which is repeatedly said in the song as “Nae Show, Nae Show, Opera” or “My Show, My Show, Opera.” As such, the entire performance is very controlled and meant to leave impression as opposed to trying too hard. There are moves that allude to the opera such as how they cover various parts of their face while moving, eventually ending up with half of it covered. There’s even a move that involves holding the hand to mimic a microphone. Near the end, right before the MV cuts out, Kyuhyun is in the center, moving his arms as if he was controlling the motions of the members, bringing back a theme of control or captivation of the audience. 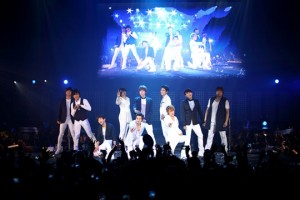 While the cinematography and styling were great, what brought me down a bit was the energy of these men. The acting was average at best. Their energy was barely there, and their expressions were as basic they could have been. It was almost as if they were just going through the motions of being sexy, serious, or intense, but there was nothing backing those emotions up.

I know Super Junior is capable of bringing more than just the intense-stare in their videos; enough of them have acted in dramas or musicals to at least have the basics of expressing emotion down. However, there isn’t much of that here at all. They all look fantastic, but it’s not enough for a music video. The song had potential to have a stimulating plot line to take it to a more dramatic level, but it left it at a well-executed dance video, which is disappointing.

The short version of the MV did well — especially in the cinematography department — in comparison to older Super Junior music videos, but it did not do nearly as well as it could have, especially on the side of the members’ expression of the lyrics. There has been more life and expression in previous Super Junior videos, and I hope that they can regain that to put out a better MV for their new music later this year.

Let us know, did the “Opera” preview impress you?