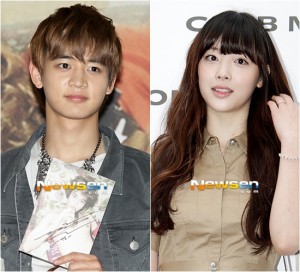 The last week in K-pop brought us Lee Joon dancing around a pole, but Eunhyuk doing some pole dancing on Strong Heart, Vanness and Junho were “Undefeated,” Block B makes a quiet comeback with “Close My Eyes,” T-ara are WILDROSES, JYP knows who’s ‘the ONE,’ professional ballroom dancer Kim Hyung-suk scored a ’10’ when he partnered up with SNSD‘s Hyoyeon on Dancing with the Stars Korea: Season 2, Ha Ji-won was majestic on the pages of HIGH CUT,  F.T. Island wanted you to “Stay,” U-KISS released their sixth mini Doradora, SME writes a Dear Family letter, the  ElectroBoyz ask Baek Ji-young “Should I Laugh or Cry?,” F.CUZ makes a try for “No.1,” Ivy has a “Torn Heart,” OohLaLa Session has a “Happy Day,” Shinee‘s Taemin does “Get Up” with a side of Korn, we got a winner on K-pop Star, BAP has got the “Power,” and SHINee‘s Minho and f(x)‘s Sulli have been announced as the leads in SME’s adaptation of the popular Japanese manga Hanazakari no Kimitachi e (more commonly known as Hana Kimi)–K-drama gods, please save us.

5. The Invincible Youth try to Trade Up

C.N. Blue‘s Jung Yong-hwa and Lee Jung-shin were guests on the last episode of Invincible Youth Season 2. While Sunny and Bora give Jung-shin a ‘shake down‘ for clues, Hyoyeon and Ye-won try to trade up, unsuccessfully, to Yong-hwa when they find that they’re paired with MC Boom.  Kim Shin-young and Suzy end up with Yong-hwa and Shin-young ends up getting a happy eye full, talk about ‘naghty hands.’ 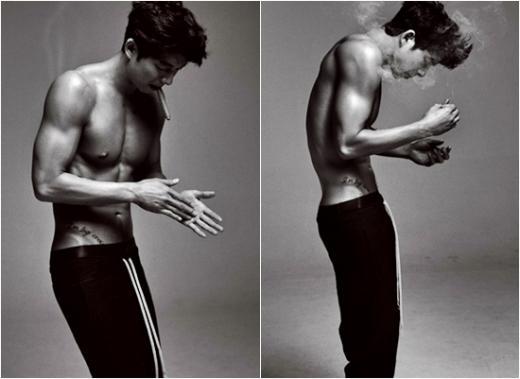 Well, it’s right there tatted on his sexy hip bone line.  Photographer Hong Jang-hyun shared these pics of actor Gong Yoo who is busy getting ready for his return to the small screen in the Hong Sisters‘ new drama Big which is loosely based on the hit 1988 US movie of the same name that starred Tom Hanks.  He’ll be in a love triangle with Lee Min-jung and miss A‘s Suzy as he plays a 30 year old whose body gets taken over by the spirit of an 18 year old.   Maybe the tat is a self affirmation mantra to give him confidence in acting beside two of South Korea’s hottest actresses in his first K-drama in five years since the classic The 1st Shop of the Coffee Prince.  Whatever the case, I’m all in for the drama which will be a Monday-Tuesday show for KBS beginning June 4.

The latest episode of Star King had a kid talent showoff called King Kids.  Loved this little guitar virtuoso who could not only rock out on his axe, but apparently has perfect pitch, too.  While watching this I thought of YouTube star and finger-style guitar prodigy Jung Sung-ha and guess who showed up next?

U-KISS maknae Dong-ho plays Kang Yoo a homeless youth who learns of his talent for boxing in the K-drama special Holy Land.  The drama debuted on the 28th and will play again for the next three Saturdays on cable station OCN.  Dong-ho is great as Kang Yoo, who is a good guy in a bad situation, but hopefully through his talent in boxing he’ll be able to find a happy ending of his own.

Episodes 11 and 12 of The King 2 Hearts were almost too awesome to explain.  You really need to watch it for yourself as Lee Jae-ha (Lee Seung-gi) displays some balls of steel as he enters North Korea uninvited to get back his queen-to-be Kim Hang-ah (Ha Ji-won).  Here’s a clip of Lee Jae-ha on the goodwill circuit visiting an amusement park and trying to get everyone to have some fun.

With his gift for Hang-ah, Jae-ha included a handmade three step skin regimen for her named I’m Sorry, Thank You, and I Love You. It might sound a little corny, but it was romantic as hell and was what motivated Hang-ah to head out to save Jae-ha’s royal tush which was in mortal danger. Soo good.