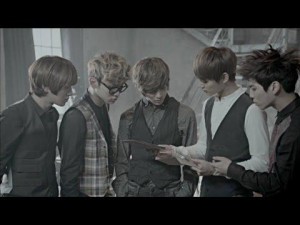 Hi SM. Gaya here. Just wanted to congratulate you. On what, you ask? SHINee’s comeback? The news that their latest mini-album has achieved an all-kill on the major charts, and has also made it onto various iTunes charts around the world? That you haven’t yet made Jonghyun delete his twitter (yet)?

Well, yes, those too; but the number one thing I wanted to congratulate you on is the fact that you have quite possibly out-trolled YG. 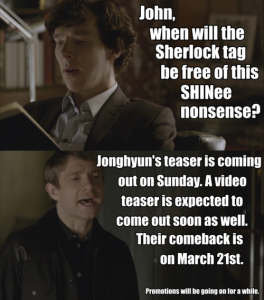 You announced SHINee’s comeback after a year  of overseas promotions and revealed the title track name as “Sherlock”, much the the joy of Shawols everywhere (and mild apprehension of tumblr-using Sherlockians). There were whispers: “does this mean SHINee is going for a manlier concept?”, “Will they be going for a more plot-oriented MV?”, “OMG TWEEEEED”. Needless to say, SM, you got this shawol very excited and begging for more. So far so good–until you released those teaser pictures. And provided an accompanying explanation of the concept as being about French boys. Seriously, did someone in your PR team get their BBC Sherlock and French film DVDs mixed up or something? And the SHINee-in-a-tent just threw everyone off even more. I didn’t know Sherlock attended music festivals. But then, I didn’t know he was French, either. SM, that stunt lanched fans into disarray: some jumped ship, some made feeble attempts to reconcile themselves with a shirtless Taemin, and many prayed very hard that the actual MV would be nothing like the pictures.

And boy, SM, did you answer those prayers–the MV teaser was more along the lines of what fans were expecting waaay back when SHINee’s comeback was first announced, and expectations for the full MV reached new heights. Everything was back on track and going swimmingly–Shawols flooded the internet, SHINee was trending worldwide on twitter, and… nothing. You made us all wait for almost three days before finally, FINALLY, uploading the MV a couple of hours before SHINee’s comeback on M! Countdown. And when you did deign to give us a time, it was “in the afternoon”–I honestly have nothing to say to that. Nothing. And it wasn’t just the fans–the other SB writers had to endure three days of me constantly counting down to a MV release time (all of which ended up being fake–thanks for that, too, really appreciated it); so bravo, SM, bravo. You really got me this time–this was on par with the “Mr. Simple” release (just thinking about that Yoo Young-Jin teaser makes me want to roll up into a ball and cry all day), but you really outdid yourself with that MV release delay stratagem. I salute you and your trolling. Standing ovation.

…right; now I’ve got that out of my system, let’s get on to the review, shall we?

As everyone knows by now, “Sherlock” is what SM calls a “hybrid remix,” a new genre they’ve supposedly created, like “SJ Funky” *shudder*. But we all also know that this is just more trolling, because for all intents and purposes this is a mash-up. From the title of the song, I’ve deduced that SHINee are five Sherlock-like detectives–but I couldn’t stop thoughts of the Famous Five flooding my brain as I watched the MV, even though there is actually six of them. Maybe it’s the noona in me, but they really do seem like kids at some points, particularly in the drama portions (especially Onew, when he wasn’t sitting in that armchair: stop being so precious, it’s killing me). 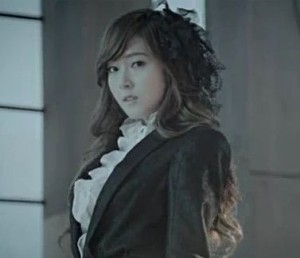 Our five detectives are called up to solve the case of a missing necklace, and with the help of an unfortunately-styled Ghost-sica, they manage to (SPOILER ALERT) find the jewelry. Personally, I’d have preferred if they’d instead solved the mystery of how to get rid of that Everysing ad that appears not once, but twice in the video. I mean, it’s not like the revenue from fans buying the (more expensive) DVD version of Sherlock to obtain an adless version of the MV is actually going to go to the members or anything (please note, there is currently no news of such a DVD. But mark my words, it’s gonna happen). And don’t even get me started on the fail steam-punk idea that I’m desperately trying to make work in order to explain the use of all the anachronistic technology seen here. Jonghyun, is your microscope even plugged in? I think the less said about this, the better.

I appreciated that Jessica was styled in a similar fashion to the SHINee members, but that has to be the most ill-fitting outfit I’ve seen her wear: that shirt didn’t suit her, the blazer looked bulky on her (and why was it belted?), and even the skirt ended up looking a bit awkward. But I loved her hair and shoes. SHINee’s British Punk-inspired fashion looked better by comparison, though their version of Victorian-style outfits were my favourite.

It was nice to see some plot too, and it almost made sense. It was straightforward enough for the most part; but who took the necklace in the first place? Isn’t there a culprit? Was it actually the apparition of Jessica who stole the necklace as an attempt to gain more attention? Or was it someone else? Come on SHINee, I need answers!

This looks unlike any other SHINee video. Generally, they have been saturated with colour, even MVs with a more monochromatic colour scheme like “Lucifer” and “Ring Ding Dong”; but in this MV, everything is washed-out. There is also this ever-present haze–I thought it was fog at first, which would be a nice nod to people’s general impression of Victorian-Era weather. But it is in fact the lighting: usually lighting is used in an unobtrusive way so as to avoid glaring, but here they have deliberately ignored this rule and have had light pouring in from the windows. This technique has been used in past SM MVs (“The Boys”, “Keep Your Head Down”), but it’s really been taken to the max here, and the resulting effect is more subtle, and hence I believe more effective, than starting up the fog machine. The only downside is that the members look washed-out too. 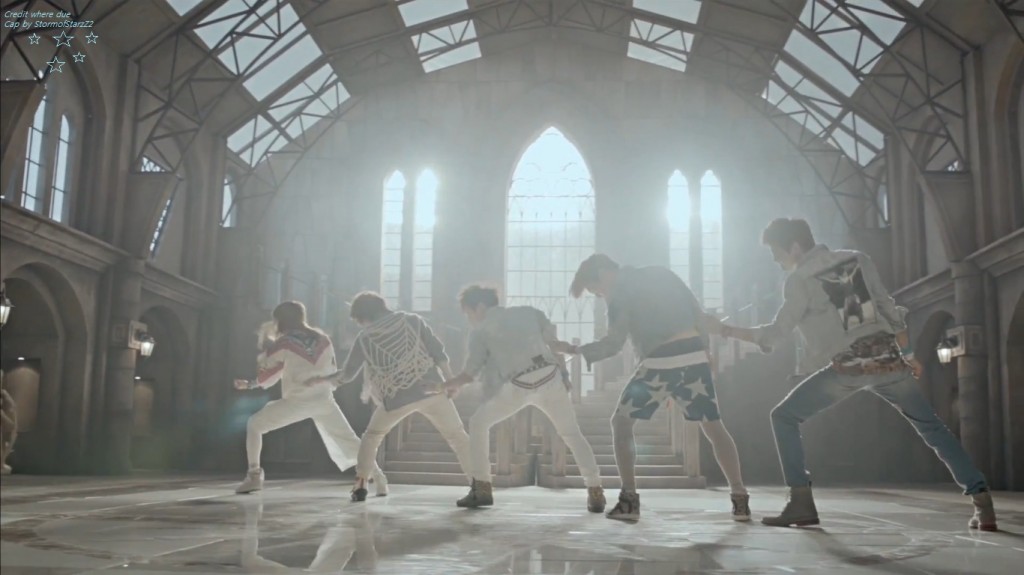 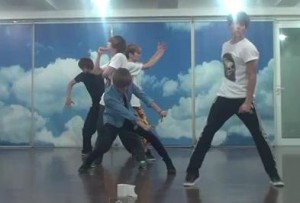 I. Love. This. Dance. Initially it felt like a simple routine, almost too simple for a group of SHINee’s calibre, with a greater amount of staccato movements and poses as opposed to their typically flowing dance style; but upon further inspection (courtesy of the dance practice video), I realised that this is on par with “Lucifer” in terms of intensity; for example, it’s one thing to be able to dance in perfect sync, but it’s more difficult to achieve that perfect “wave” or ripple effect that features so much in this dance. Timing is of the essence here, but thanks to extensive training and skill sets, SHINee have it down pat.

Apart from this wave effect, I also loved the whole vertical line structure and the four-pose sequence. Funnily enough, it is sometimes even harder to remain still than be constantly moving, especially after performing some intense choreography immediately before. I’ve already said it, but this routine is intense–but SHINee have built a reputation for being able to pull off all manners of complex choreography, and on their Music Bank comeback, they even managed to sing the majority of “Sherlock” live too.

And even little things, like how Minho clasps his hands behind his back at the beginning of the choreography, and Jonghyun re-clasps them in front of him at the end; covering their ears at the noise of breaking glass, that impromptu Jonkey duet, and Diva Key‘s swivel-flap dance (be very careful when typing that word, kids) followed by Minho’s leapfrog move (the sadist in me is really looking forward to the live performances–how long before he trips on Key and goes sailing into the audience?) were enjoyable for me to watch and pick out. The only thing I didn’t like was that random armpit move–the covering of the ears made sense in context of the lyrics, but the rest of it was just a bit awkward. But all the same, it was nice to see SHINee try something different with this comeback. 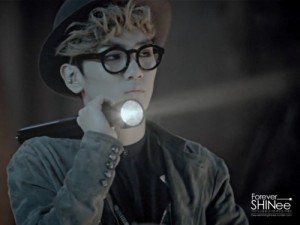 “Note” and “Clue” are both about the birth of a new frisson, but view the matter in different ways: “Clue” is suspicious and wary of this new attraction, while “Note” has fallen head over heels for the love interest. But the two songs do hold a common theme of curiosity about this new love that is forming, and it is that theme that holds “Sherlock” together lyrically. Together, the lyrics in “Sherlock” make sense, but I have to admit that similarity of the themes in each song made this a much easier task to accomplish. I was quite disappointed, to be honest; my expectations became a lot higher when I heard that SM had decided to outsource and hired a university professor and author to write them. And now I find out that they didn’t even use his lyrics for this song? Well, as long as you eventually end up using them for SHINee, SM. Not that the lyrics were bad; but I’d wager that they were planning this “hybrid remix” thing for a while, and it could have been executed so much better, like having “Clue” and “Note” have different meanings, but when put together for “Sherlock” they would reveal an entirely new meaning. Unfortunately, All three songs are too similar for the possibility of a deeper effect, and the fact that is essentially just a slab of “Note” sandwiched by ” Clue” seems lazy to me. It’s a tasty sandwich, but not a truly nourishing and filling one. Oh, the missed possibilities.

In the end though, the most important thing I learnt is: SHINee’s back. 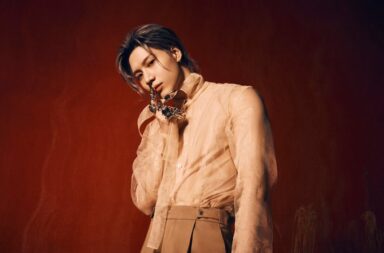