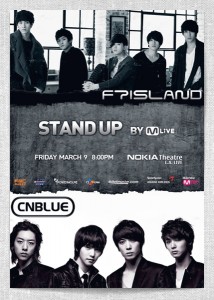 We’re fully into March and I’m on countdown mode to the F.T. Island and C.N. Blue concert in LA so my little K-popiverse is about to explode, but enough about me– what’s been happening in K-pop? Last week in K-pop, we found out that being a “B” isn’t so bad, PSY shared a little on You & I, Rainbow is “Gonna Gonna Go” to Japan, KARA “Speeds Up,”and Big Bang is still ALIVE y’all.  These are the 5 Things that happened in K-pop last week that I think were a little bit more special than the rest.

5. Happy Together for 10 years 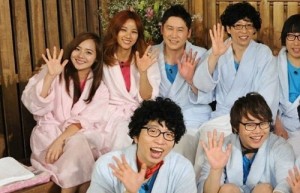 On March 1st, the Korean variety show Happy Together celebrated its 10th anniversary. Joining the current MCs Lee Jae-suk, Park Myung-soo, Park Mi-sun, Shin Bong-sun and their hoobae gagmen dog pound were past MCs of the show which included  Shin Dong-yup, Lee Hyori, Eugene and Tak Jae-hoon.  It was an enjoyable show with clips of episodes from the past 10 years, Hyori and Eugene dancing to songs from their girl group days. I was waiting anxiously for their water gun segment where you get zapped if you say your secret word, but alas no super soakers were in sight for the show. I wonder if Hyori threatened Jae-suk not to mess up her ‘do. It was an entertaining show and the rapport amongst the MCs was great. Thanks to the Happy Together crew for ten years of bringing laughter to all their fans.

Shut Up: Flower Boy Band is my latest K-drama crack of choice and this bit with the boys’ former teacher Kim Shil-ba becoming their new manager.  It’s sooo good, definitely a must see if not only for the bromance. Oh, and Kim C is the best as Rock Kim.

3. It Ain’t Easy Being King

Especially when the selfishness of your family members resulted in the loss of the love of your life.  King Lee Hwon just discovers that his father covered up the conspiracy to kill Heo Yeon-woo to protect not only his ruthless grandmother, but his lovelorn little sister too.  This scene where he remembers the past and confronts his teenage self is daebak. Yeo Jin-gu and Kim Soo-hyun are really excellent in their roles as Prince/King Lee Hwon.

And I just have to say that this was the cutest thing ever. 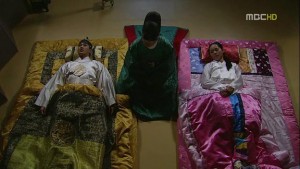 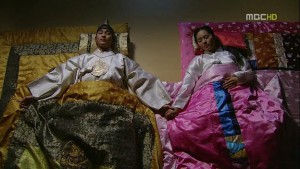 I LOVE this song. Hands down my favorite off of the ALIVE album. I got tingles down my spine on first listen, which is the good news–bad news it was the only song off of the album that did. But give me a week or two and I’ll probably love the whole album. “Bad Boy” has an awesomely smooth, mellow hip hop beat and is oh so groovable. I like the MV better than the one for “Blue;” it is beautifully shot, the locations in New York match with the hip hop vibe, and I love the boys’ little dance segments. The MV has a simple concept with them walking down the street singing about their relationship which matches the song, but isn’t anything groundbreaking. I’ll look forward to a mind blowing MV for one of the other songs–they got four more chances, right?  I also might have got carried away watching a bunch of reaction videos which can be hilariously entertaining and found out that Big Bang is doing a 2012 BIGBANG GLOBAL COVER CONTEST with the winner getting an invite to the ROK.

1. A Big Bang on Running Man

If you read 5 Things at all you must have known that this was a given. Honestly it wasn’t the best episode of Running Man I’ve ever seen–there have been better due to better locations, games, etc., but I stilled LOVED it. And maybe I stayed up until 3:00 am HST Sunday to watch it as soon as possible. It was funny from the very beginning with the Running Men making their big entrance riding in on SUVs in their all black ensembeles and then getting upstaged by Big Bang arriving in helicopters wearing red, to Taeyang being so excited to play he runs off by himself and then rips off the staff member’s tag, T.O.P. wanting to follow Daesung around because he doesn’t know how to play the game, G-Dragon getting found almost immediately by Haha and Song Ji-hyo and then being let off, and Seungri getting taken out first because of his “Lies.” Ah, it’s good to have Big Bang back in the K-popiverse.