Group Names: the Good and the Bad

What first interests you in an idol group? Is it their latest song? Their MV? The good looks of one of their members? Partly, but another factor which affects your decision, perhaps sub-consciously, to listen to a band for the first time is their name.

Over the last few years, the sheer number of rookie groups in K-pop has sky-rocketed, and with these bright-eyed an 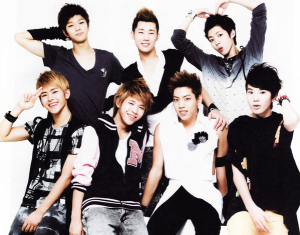 d bushy-tailed hopefuls comes a string of group names ranging from the ridiculous to the perfect. Infinite stands out as a particularly good name; it’s compact, original, and suggests limitless star quality. I wouldn’t need to see a photo of Woohyun first in order to check them out. However, when B.A.P announced their name I scoffed, Best Absolute Perfect? While the words themselves were high enough bars to set, the resulting meaning doesn’t seem to suit their destructive, chaotic hip-hop nature in the slightest. They’ve proved their worth, but I can’t help but think having a name that seems to equate to food in several languages is going to stress their bad boy appeal. It’s the girls who really dropped the ball, with names like Chi-Chi, a phrase that means different things in different cultures, few of which are flattering.

K-pop veterans can rely on their popularity to hide names, but when you take a good hard look at names like 4Minute and Super Junior you see the silliness. There are clearly 5 members of 4Minute and that is that. Not to mention Super Junior clearly wasn’t thought of from a long-term angle (and neither was Teen Top). But I’ve moaned enough, and there are some names I would like to honour:

• 2NE1 – the combination of letters and numbers should give me an algebra-induced heart attack, but it actually works well, being catchy and easy to remember while staying unique. The nod to the 21st century and the words New Evolution perfectly captures the sound these girls are making.

• Big Bang – Okay, perhaps something of a YG bias is showing through, but Big Bang is a name that promises only good things with a modern approach. After all, the actual big bang made quite the impression, much like the boys have made in K-pop. Both Big Bang and 2NE1 are names with plenty of potential wordplay, and YG often uses that (e.g. To Anyone).

• Block B – The harsh explosives on this name give it impact, making you more likely to remember it, and suiting their style of music. Merit must be given for their album names: New Kids on the Block and Welcome to the Block.

wn Eyed Girls – Simplistic and perhaps unimaginative they might be, after two years drowning under names that just appear to be random letters I really appreciate these titles.

• Beast – Well done to Cube for a name that manages to stand for something (Boys of EAst Standing Tall) but also suits the group. I’m less keen on their other name, B2ST (Boys 2 Search for Top) because I feel compelled to make bad Big Bang puns.

The names listed above enhance the group’s overall, but I really believe if a group has a nonsensical name, especially one that doesn’t translate well into other languages, it has to work harder. Are there any examples of good bands with bad names (or vice versa) that you can think of? Or if you had a K-pop group, what would you call it?