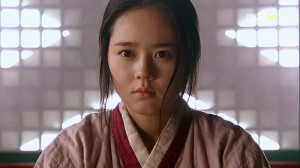 We’re all out of love as we approach the end of February and what has K-pop got to offer us?  The return of miss A, things getting good on Wild Romance as the drama heads towards its finale and eek! Director Kim and Dong-ah have their first awkward kiss–I love them, there was Sunny Hill for Salamander Guru, K.Will Needs You, Cha Tae-hyun joining 1N2D just might be awesome, and there was a whole lot of (Big) Bangin’ going on. Lastly, how did I know an eclipse was coming on Moon\Sun?  How could it not have with all the earlier talks of the moon and sun not being able to share the same sky (silly humans).  But now Yeon-woo/Wol remembers EVERYTHING (I think) and I’m thinking she’s pissed.  “That girl will cry no more,” watch out royal baddies because it’s on like Donkey Kong now!  These are the 5 Things that happened in K-pop this week that I think were a little more special than the rest.

5. Se7en and JYP on Inkigayo

It doesn’t get much better than this.

4. Joon gets birthday kisses from the Kids

Lee Joon got stuck watching all three kids on his birthday in the latest episode of Hello Baby Season 5, but in the end the other MBLAQ boys surprised him with a cake to celebrate.  Then Joon got birthday kisses from the babies, including one he didn’t quite expect.

I’ve said it before, and I’ll say it again–Mir just might be the cutest baby on the show. 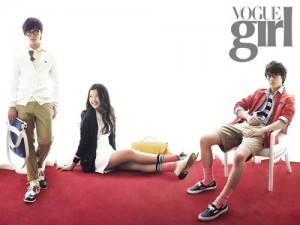 The younger royal love triangle of the K-drama, The Moon that Embraces the Sun are hot commodities, not that they weren’t before, but their latest stint in the saeguk world has definitely upped the ante.  Yeo Jin-gu, Lee Min-ho and Kim Yoo-jung are everywhere.  I loved the latest photo shoot they did for Vogue Girl Korea.  I liked that they were stylish, yet still were dressed and posed appropriate for their ages.  Many may not realize that Min-ho is only 19, Jin-gu only 14, and that Yoo-jung is merely 12.  They did such a great job with setting up the story of the drama that the drama is experiencing awesome ratings and approaching “National Drama” status, if it hasn’t already reached it. These three are among my favorite child actors and am excited at what the future holds for them, other than a bunch of CF offers.

2. Lee Hayi has No Mercy

Another fave of mine on K-pop Star made it to the Top 10 with her soulful version of Duffy‘s hit song “Mercy.”  The competition was stiff with her facing Park Ji-min, one of the top competitors on the show, but she pulled off another upset in the show.  And can I just say that YG and JYP were such giggling fan boys?

The day of the big contest between the two rival bands has finally come, so who was able to rock the house? The episode didn’t quite play out the way I hoped or expected, but it did show heart–of which this drama has a lot.

I have to say that I’m a big fan of all the Eye Candy boys– for being such raw talent, I think they’re doing admirable.  Love INFINITE‘s  L, if looks could freeze someone to death his definitely could .  I’m also a big fan of Superstar K3‘s Kim Min-suk, he’s cute yet lethal and I love his accent.  I’ve read that the producers loved him too and tweaked the character in the show just to fit him.