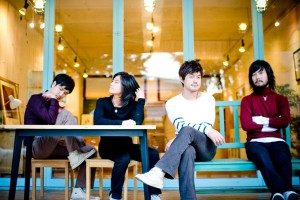 Soft rock and indie band Vodka Rain made their debut back in 2005, and have been working relentlessly ever since to popularize their genre of music. Vodka Rain is composed of four members: vocalist Ahn Seung-Joon, guitarist Lee Hae-wan, bassist Joo Youn-ha, and  drummer Seo Sang-soon. To date, Vodka Rain has released seven full albums, and the group even holds an annual concert, the “Romantic Vodka Rain” show to showcase their musical abilities as well as to show audiences the wealth of emotion capable in soft rock and indie music.  Vodka Rain has held their ground for many years in Korea, despite the limited avenues through which musicians like themselves can promote their music.

Another obstacle that once stood in the way of Vodka Rain’s musical creativity just this past summer was the MOGEF, or the Ministry of Gender Equality and Family, a major vehicle for censoring or banning music in the South Korean entertainment industry. Vodka Rain stood alongside fellow indie band 10CM at the forefront of a class action suit against the MOGEF for the banning of their songs “Night Time Restaurant” and “Americano,” respectively. Have a listen to their banned song “Night Time Restaurant.”

Vodka Rain maintains very smooth and mellifluous harmonies with all their music, and constantly puts the artistic and emotional construction of their melodies above all else. With their latest and perhaps most popular album Faint, Vodka Rain went forward using the idea of the forgotten things in life as a central theme. Regarding Faint, Seung-Joon commented that,

We have always talked about the things we want to say at the time we release an album. In this album [Faint] we wanted to talk of the things that are getting forgotten; things that we felt will become forgotten forever if we don’t put into music.

Here are two of my favorite tracks off of Vodka Rain’s latest album Faint.

Emotional but light-hearted, the music of Vodka Rain is brilliantly produced and balanced by simple lyrical compositions. They have a phenomenal collection of easy-going, but inventive music that has kept them relevant as well as popular despite the hurdles posed against them and the rest of the indie and alternative music industry in South Korea. Today, Vodka Rain invests and develops their passion for their unique musical sound as they continue to epitomize the lovechild between the soft-rock and indie genres.