Panic at the SBS Gayo Daejun and The ELF Conundrum

You know things are bad when Siwon starts swearing on Twitter.

It seems as if 2011 is a year of lasts for Super Junior; it’s rumored that the group will go on hiatus after the completion of their Super Show 4 tour in 2012, at which time the members of Super Junior will gradually start their mandatory military service. Unfortunately, 2011 was also not the most illustrious year for Super Junior — their last album utterly failed to impress, their music videos were barely second-rate, and it honestly seemed as if SM was intent on pushing Super Junior into a premature retirement.

With that in mind, it wasn’t too surprising to see SM’s latest slip-up with Super Junior during last night’s SBS Gayo Daejun. Long story short, Super Junior had to pre-record their performance for the show, but ELFs were never notified of the pre-recording, which led to Super Junior performing in front of an audience of non-ELFs. Evidently, Leeteuk was trying to rally up the people that were sitting in the audience (most of whom were not Super Junior fans) to cheer during their performance anyway, but it just wasn’t the same.

I know, I know — what a first world problem, right? As expected, ELF was pretty angry about this in their usual ELF manner, but what was surprising were the reactions from the members’ themselves. And where do K-pop stars go whenever they want to express their passive-aggressive feelings of resentment? Twitter, of course. 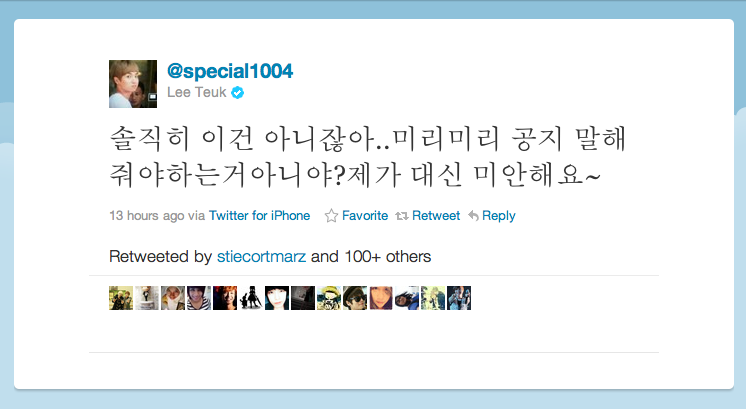 Honestly, this isn’t right..shouldn’t everyone have been notified far beforehand? To everyone, I’m sorry~ 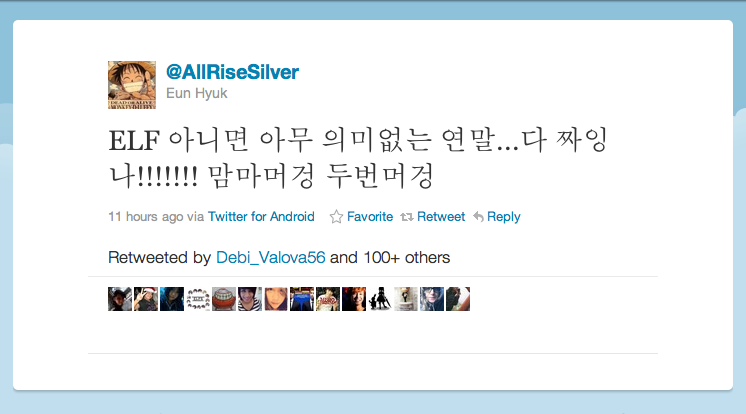 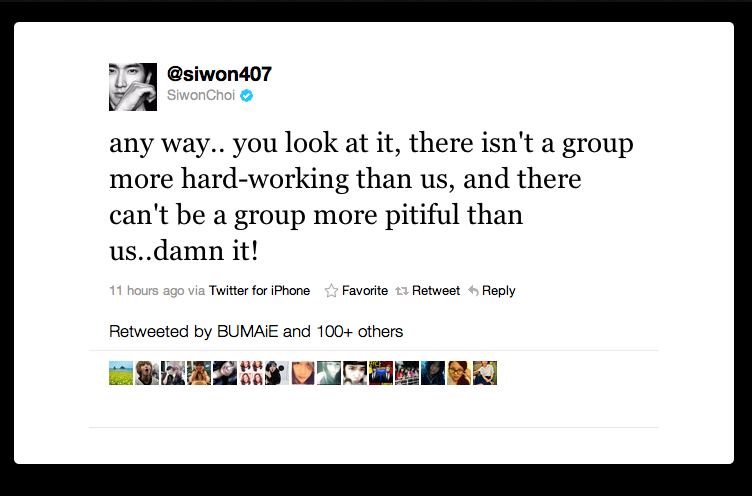 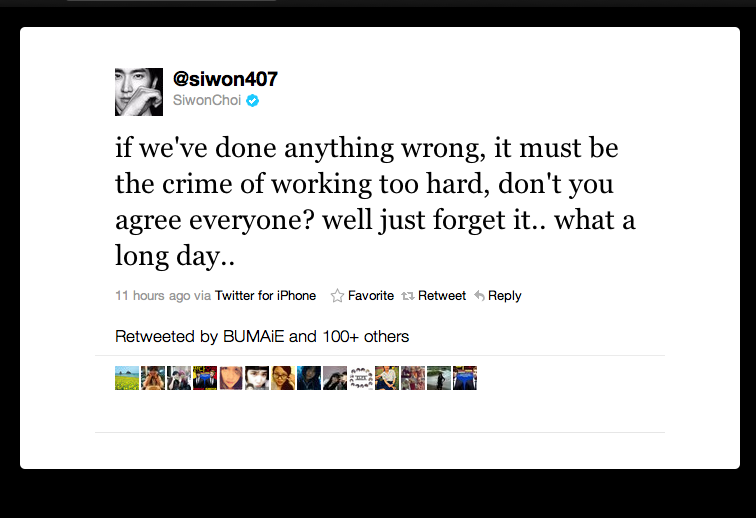 2PM‘s Nichkhun and Taecyeon also felt moved to respond to the event via Twitter, even before the Super Junior members themselves had a chance to post their reactions: 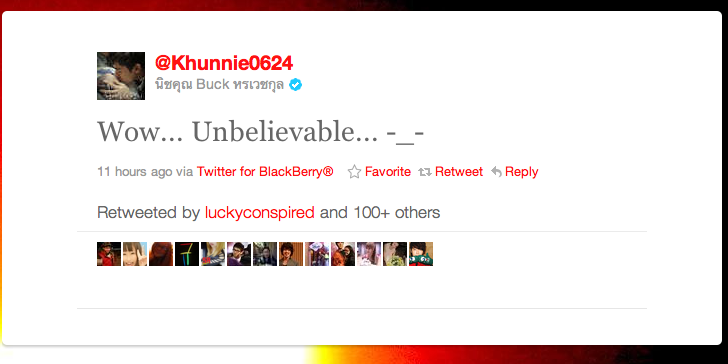 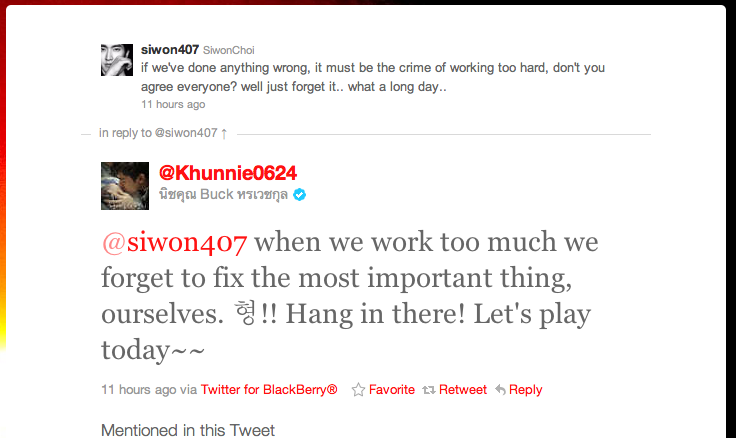 Don’t get me wrong: I like Super Junior and all, but I’m usually the last person to sympathize with Super Junior whenever they run into a petty issue, and I’m the first person to start rolling my eyes at ELF whenever they start hurling complaints at the Powers That Be whenever these petty issues arise. But this slip-up still left a really bad taste in my mouth. SM really couldn’t even muster up the energy to put out an announcement about Super Junior’s performance? It would have required minimal effort  to put up a one-sentence long post on their official Facebook page; everyone knows that ELFs would’ve come running by the drove within minutes.

But objectively speaking, was this whole mishap a big deal? Not really — I think Super Junior can live without having their sapphire blue army for one performance. And besides, Super Junior still has two more end-of-year festivals to go, and you can bet that ELFs will be sure to make their presence known at those performances, if only to make up for their absence at the SBS recording. But it doesn’t change the fact that SM did a really sloppy job in managing PR for this event. SM knows that ELF is arguably the most easily antagonized SM fandom, and SM’s already earned a bad rep amongst ELFs as is. And considering all of this, SM hasn’t even issued an apology in regards to this event. Issuing an apology isn’t a way to suck up to the fans; it’s a gesture of common courtesy. But considering the sloppiness and inconsideration with which SM handled this event, I’m not too surprised with their lack of response. 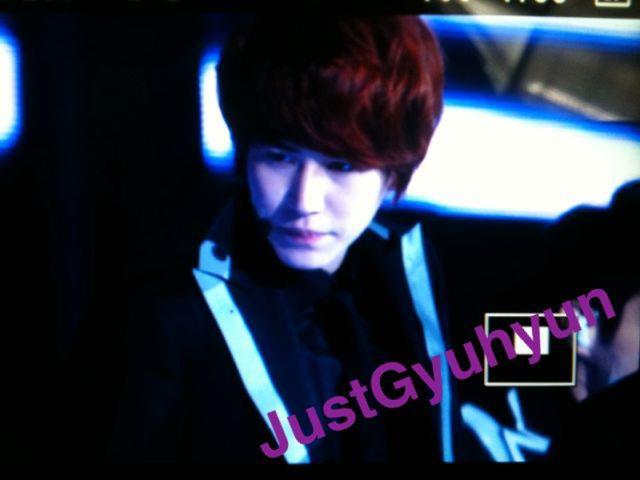 As a multimillion dollar company which runs almost entirely on good PR with its consumer constituency, SM should know better. But honestly speaking, SM’s behavior within the past year has been a little bit strange. For one, their music has notably gone downhill this year, and their music videos have become some of the least impressive within the entire K-pop industry. Even though the SMTown concerts in Paris and New York this year were notably impressive (if only because of the fact that they took place in Paris and New York), it doesn’t excuse the fact that SM’s been putting out sloppy material for the past year. If anything, now is not the time for SM to be pissing off their consumer audience, because that’s basically the only thing that’s been keeping SM afloat. This applies especially to Super Junior; considering Super Junior’s recent releases, it’s become evident that the only people who actually care about Super Junior anymore are their fans. And ELF, for all their whininess, is justified in their disgruntlement with SM; they’ve arguably become the most used and abused fandom within the SM family, and it’s become difficult to not sympathize with them.

ELF has made a habit of hating on SM whenever something bad happens to their boys, but even despite ELFs complaints, SM doesn’t seem keen on changing their ways. At this point, it seems as if ELF is doing little more than constantly punching at walls. I would be shocked if the Super Junior members themselves were happy with the way SM has treated them, but  the members probably have limited decision-making power in regards their careers. Otherwise, why else did JYJ’s original request to merely shorten their contracts ultimately result in a full-blown lawsuit that ended up splitting the group? 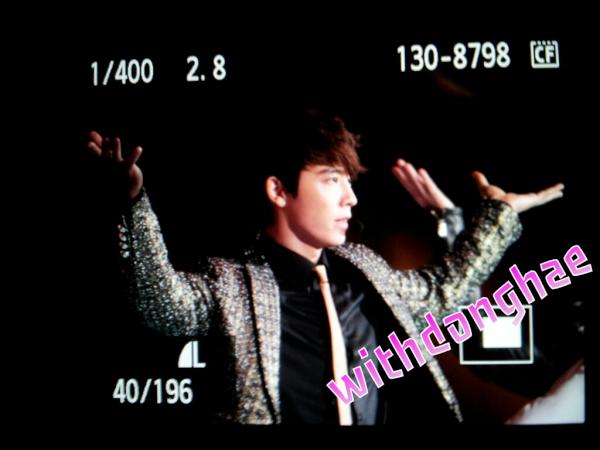 ELF knows this, which is why many of them constantly feel the need to “fight” for their boys, but herein lies the contradiction: SM operates on the belief that as long as their products are selling successfully, there’s no need to make any changes. Super Junior boasts some of the highest sales for some of their crappiest products, all to the thanks of ELFs who are relentlessly purchasing multiple copies of albums in an effort to keep Super Junior at the top of the charts, while simultaneously bemoaning the quality of the albums they are purchasing. The simple way to demand better quality products? Stop buying. But here we run into another problem: SM has a history of condemning poor-selling artists into the SM Basement — and Super Junior is already much too close to the basement door for ELFs to take that kind of risk. And plus, what kind of fan boycotts the very records that their favorite artists worked so hard to record and make?

There is no easy solution here, which is why SM keeps slacking off and fans keep whining. ELF will continue to complain, and music critics will continue to throw jabs at Super Junior’s music, but unless sales start dropping dramatically, SM has little motivation to change their current ways. For a company who hosts some really talented and promising artists, this is a really disappointing trend to watch. 2011 as a whole has been a disappointing year for SM fans, with nary an impressive promotional single to be seen. The vibe I’m starting to get from SM is one of general apathy — they’ve become so concentrated on “bigger and better things,” to the point where releasing good material and maintaining a good relationship with the fans have become trivial matters. But in fact, these are the very two things that should build the foundation of any good K-pop company. If SM can’t be expected to maintain civility with its consumer audience, then it’ll be very difficult to expect things that are “bigger and better” from them.