[youtube http://www.youtube.com/watch?v=VQ3RIEQw0UU]This week’s K-pop Indie Gem, I am introducing Oldfish. Oldfish is a one-man band featuring Soda. Kim Hyung Su aka Soda is a representative of his entertainment company, MagicStrawberry Sound and a producer. He is responsible for pretty much everything in his album including vocal, composing, lyrics, keyboards, programming and etc. Just like the other Indie bands in Korea, he started out on the street of Hongdae performing at live cafes and clubs. Back then, he already had 4mini albums out slowly gaining his fame. In 2003, he signed a contract with Pastel Music Entertainment and till now, he has released three full albums. To continue his music, he set up his own entertainment company in 2010 called MagicStrawberry Sound. 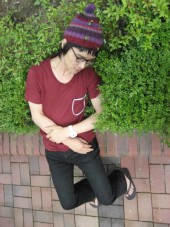 Now as for the name goes, during the interview of his 2nd album Soda explained his reason for the name “Oldfish,” He said,

“Consider evolution, which is described as the advancement of new things due to curiosity and scientific progress. However, can you call it true evolution when humans give in to their own desires and become cruel? Rather than heading in that direction, could we consider a fish with the mere memory capacity of three seconds who’d given up on that kind of evolution to be a more evolved organism than a human? It was out of those kinds of musings that the name arose.”

“I listen to a variety of music genres. Shoegazer, guitar pop, folk, world, everything except heavy metal. In the early days of Oldfish I wanted to create a new kind of music with folk and electronic sounds. Personally, I really enjoy Kings of Convenience a lot.”

The interview continues on explaining his music as the music that is filled with warm and soothing melodies where your ears just happen to catch the sounds and end up falling in love with the music. He also goes on talking about his interest in design. As you can see from his music videos and his album covers, he has unique taste of artwork used in his music. He explains that he has consulted with his designer friend about the artwork on his album cover and the posters and came up with the icons like the robot and the sheep and how they show different characteristics to make his music that much better to be heard and seen. As you can see, Soda is a musician who is responsible for every work that is put into his album.

Unfortunately the mini albums that were released in 2003 and 2004 are unable, if you are interested for more, check out few more songs below from his full length albums and see if Oldfish is your style of music!