Perhaps it’s because I’m just starting to dive deep into the world we call Korean Indie music, but it appears to be primarily dominated by men.  As a result, I was delighted to see a group like Dalmoon ( also known as Rooftop Moon Light or 옥상달빛), a folk indie duo comprised of Kim Yoon Ju and Baek Se Jin.  In addition to singing, Yoon Ju plays the guitar and Se Jin adds an interesting sound to their music by playing the Xylophone, an uncommon instrument in K-pop. 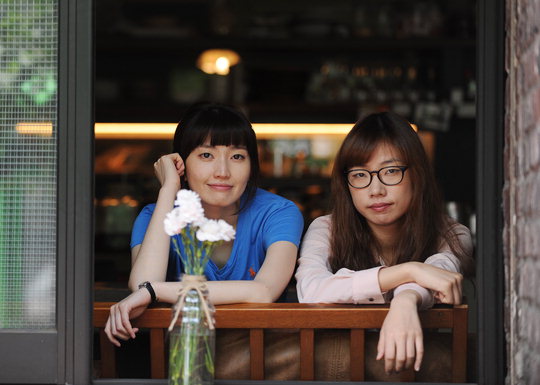 Dalmoon also made a bit of a name for themselves on the drama soundtrack circuit.  Their self titled song “Attack Moon Light” (옥상달빛) was played in drama Pasta and “Beats” was featured in My Princess. Quite an achievement for small group under a even smaller label.

Their music may not cater to everyone’s tastes, however their music is very organic and relaxing. I really enjoy their simplistic sound because it’s pleasing to the ear, which is the perfect music to listen to before bed. The duo is definitely talented and original.  In fact, I can potentially see them move out of the indie genre and permanently into the drama soundtrack niche market because they possess that K-drama sound.

My personal favorite track is called “The Easiest Story”. It has a very cute vibe and note that this version is unplugged adding more personality. Check out their albums their debut album 28.